The PC market rebounded slightly in Q2, according to research firms Gartner and IDC. After six years of quarterly PC shipment declines, 2018 was mixed, with negative, flat, and positive quarters. 2019 is shaping up similarly: Q1 was negative and Q2 is positive, just like in 2018.

Gartner and IDC analysts pointed to the Windows 10 refresh in the business market as contributing to the past quarter’s gain. But IDC warned it wouldn’t last. Gartner noted that while the U.S.-China trade war had not affected the PC market, the next phase could, since most laptops and tablets are currently manufactured in China.

(Gartner also shares U.S.-specific figures and in Q3 2018 found that Microsoft had broken into the top 5 PC vendors. The company held onto this position for the following three quarters. But that’s U.S.-only — Microsoft still doesn’t appear on worldwide charts.)

As you can see in the chart below, Gartner found that in the top six, only the top three saw gains in PC shipments. The rest of the market was down 6.7%. 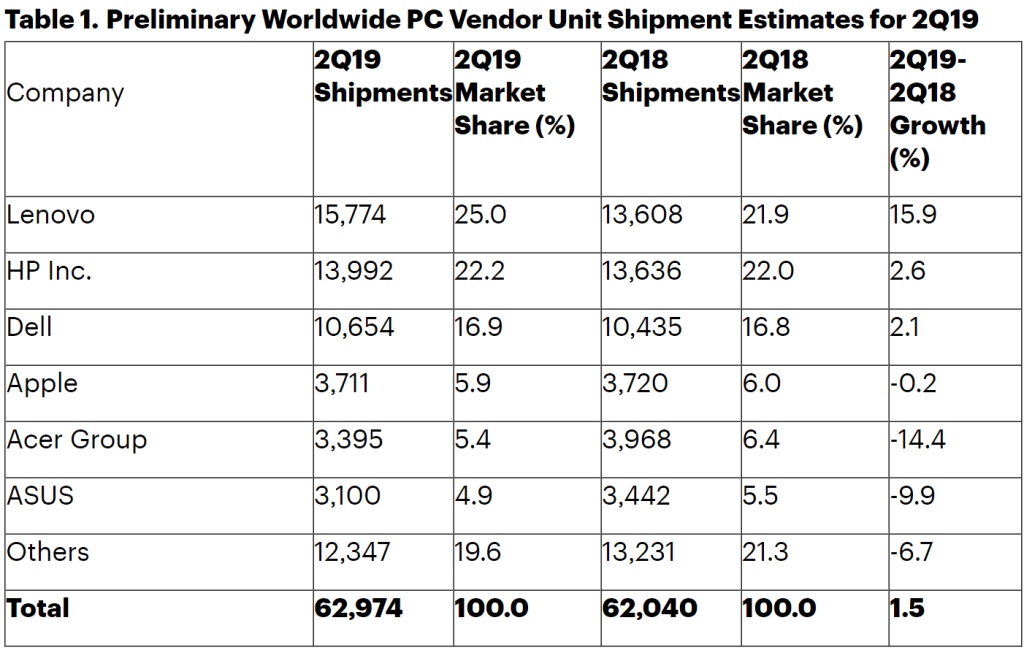 Lenovo has finally decisively pulled ahead of HP. Dell’s growth has slowed, but at least it’s still growing.

“There are signs that the Intel CPU shortage is easing, which has been an ongoing impact to the market for the past 18 months,” Gartner principal analyst Mikako Kitagawa said in a statement. “The shortage mainly impacted small and midsize vendors as large vendors took advantage and continued to grow, taking market share away from the smaller vendors that struggled to secure CPUs.”

IDC also found Lenovo first and HP second, with Dell rounding out the top three. While all three saw growth, Lenovo was significantly ahead. The rest of the market grew by 4.9%. The exact numbers, for your perusal:

“With the January 2020 end of service (EOS) date for Windows 7 approaching, the market has entered the last leg of the Windows 7 to Windows 10 commercial migrations,” IDC research manager Jitesh Ubrani said in a statement. “However, the closing sprint is unlikely to generate the spike seen when Windows XP met its EOS because we are further ahead of the migration, with two quarters to go. Still, organizations looking to finish their migration will create new opportunities for the market in the coming quarters.”