Google has announced a new service that lets travelers use Google Pay in conjunction with prepaid virtual travel passes.

Google revealed in January that it was combining Android Pay and Google Wallet under the new Google Pay brand, and the big global rollout began last month. While Google Pay can already be used to pay for public transport in some cities, including London, Kiev, and Portland, those fare payments rely on a bank card associated with your Google Pay account. This latest initiative is designed to leverage Google Pay as a digital wallet using prepaid tickets and passes.

Starting in Las Vegas today, travelers will be able to buy a ticket for the Las Vegas Monorail through the transit company’s website, be it a one-trip ride or a seven-day pass, and complete the transaction using Google Pay. The ticket is then saved to the customer’s digital wallet, and they can just tap in and out on the terminal. 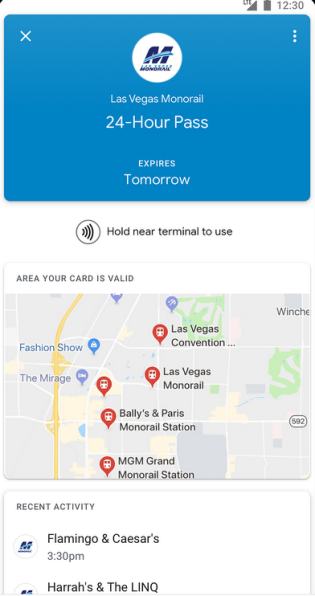 At scale, this could prove useful beyond its immediate convenience, as it lets travelers see the location of the nearest station while also letting them keep tabs on their usage via their transaction history. For personal data geeks, or those trying to manage their budget more effectively, these features could sway them toward adopting virtual transit passes over physical incarnations.

Back in December, Portland public transport agency TriMet announced a tie-up with Google that involved a virtual transit card within the Google Pay wallet, though that still appears to be an early-stage beta program. Above: Hop: Virtual transit card available to some Google Pay users in Portland

The announcement today coincided with Google’s attendance at the Shoptalk retail and commerce conference in Las Vegas, which explains why the new feature is being rolled out first in Vegas.

However, the internet giant said that this functionality will be landing in more cities “soon.”