Hedera Hashgraph derives its name from an algorithm. It is based on the “hashgraph consensus” technology that gets around the big trade-off related to blockchain, the fundamental technology behind cryptocurrency. Blockchain can be fast but unsecure, or secure and slow. Hedera Hashgraph aims to build a fast and secure blockchain alternative.

This is not a riveting topic for many people, but it may surprise you to learn the company has just raised $100 million. It raised the money via a future token sale from institutional investors, and Hedera will use the money to create a new commerce network based on its “hashgraph consensus” technology.

Mance Harmon, CEO of the Dallas, Texas-based company, will use the money to build out the Hashgraph network and set up a micropayment system that uses the core tech. Put simply, the company hopes to disrupt the world’s financial systems, Harmon said in an interview with VentureBeat this week.

“As a technology, it’s a fundamental advance in the world of distributed systems,” Harmon said in an interview with VentureBeat. “It has fantastic performance, and it achieves the best in security one can have in the field.”

I was fascinated by the story Harmon told me about how the hashgraph technology could one day be used to handle millions of transactions per second in a secure way. 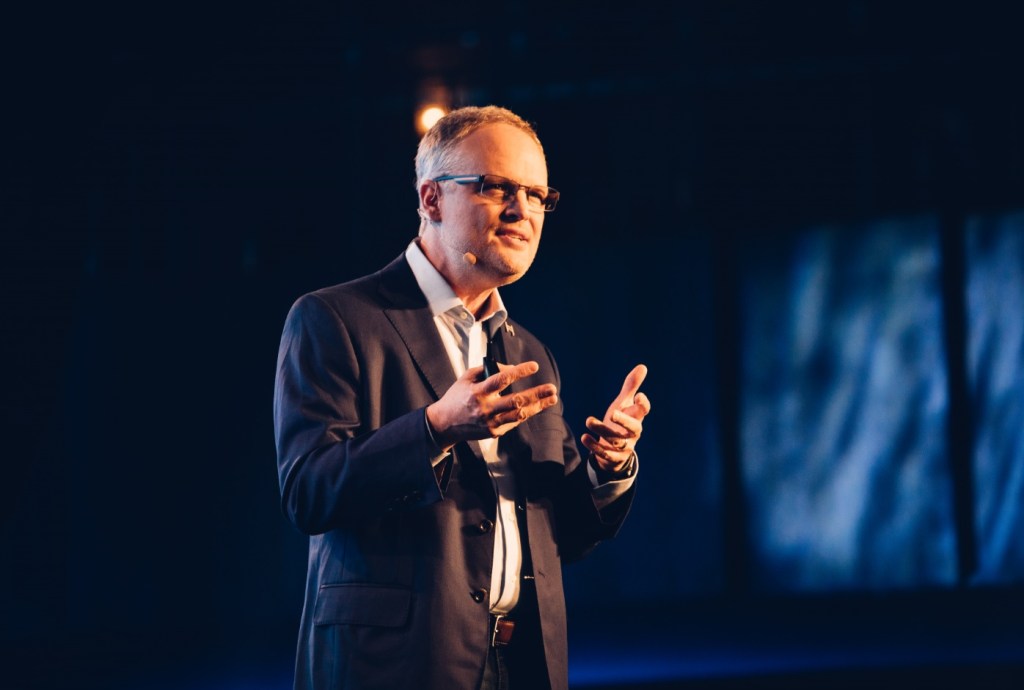 VentureBeat: The amount of money in the fundraising here ($100 million) is definitely an eye-opener. Could you take a crack at explaining Hashgraph to me?

Mance Harmon: As a technology, it’s a fundamental advance in the world of distributed consensus. By comparison, it has fantastic performance, and it achieves the best in terms of security that one can achieve in the field.

In distributed systems, academically, there’s a gold standard for security called asynchronous byzantine fault tolerance. This notion of asynchronous BFT has been around for decades. There have been small systems that have achieved it, but it’s never been achievable at scale before. That’s what Hashgraph does.

If you look at everything else in the market, there’s a tradeoff between performance and security. Bitcoin has terrible performance, but in some ways it’s pretty secure. At least it’s more secure than what we have in the closed or permission networks, where they get rid of proof of work and get much better performance, but the security is significantly worse. There are new categories of attacks.

What Hashgraph does for the first time is break that tradeoff and maximize both at the same time. It achieves the best security that one can achieve — theoretically there’s nothing better – and it maximizes performance. It’s not possible to better in terms of performance than what we’re doing in if you maintain the same level of security. That’s the value proposition, if you will, the contribution of Hashgraph.

VentureBeat: What’s the origin of this?

Harmon: Leemon Baird is my co-founder. He has a Ph.D from Carnegie Mellon in computer science. He and I have been working together for 25 years. We grew up in the Air Force together and followed each other from assignment to assignment, and then became entrepreneurs. In 2012 he went to work on this problem of achieving asynchronous BFT at scale. Coincidentally, Bitcoin was coming around at the time, but there’s no inspiration in this from Bitcoin. It’s a totally separate, orthogonal path to Hashgraph.

He worked on that for years, and in 2015 he had a breakthrough that made it possible to achieve that goal, that vision. That’s what today we call the Hashgraph. It was invented by Leemon, and he published a tech report at an academic level in 2016. It’s been available for review for years now.

VentureBeat: How soon did you start the company?

Harmon: Almost immediately. In 2014 he was working on it and we were thinking about the implications of what could be done, if he was able to solve that problem. Of course then, in 2014, the Bitcoin craze was in full swing. What was interesting to us about that is that Bitcoin had created the market for Hashgraph, even though Leemon didn’t start with a vision of creating a distributed cryptocurrency. His vision was much broader than that. Bitcoin created the market, but that was coincidental to his research. He was just doing the research because it was a cool math problem.

He had the discovery in the spring, maybe May, of 2015, the innovation, and then proved it formally, in a math sense. We got our first funding to kick off the company in Q4 of 2015.

VentureBeat: When you were out looking for money at that time, was it relatively to find that funding, or did you have to do a lot of work?

Harmon: It was pretty easy, because of Bitcoin. Back then, you probably remember. Blockchain as a term was relatively new. Bitcoin was at the top of the hype cycle, but blockchain as a term was new. Everybody believed there was huge potential here, though. We didn’t do an ICO or have a cryptocurrency or anything like that. We got traditional VC financing. From the very first presentation, there was enormous interest.

We quickly closed some financing for that company, which was Swirlds. It’s worth mentioning that there are two different companies here. Swirlds is the one we started in 2015. We first addressed permissions networks for enterprise use cases. That is VC-backed, led by New Enterprise Associates. And then last year, the summer of last year, we got to a point where we had enough market validation for the technology, and enough traction in Swirlds, that we realized we could begin to think about a public ledger.

We approached this very differently than the rest of the market. Most of the market started with public ledgers. If you look at the big platforms today, they started with public ledgers and then moved into the enterprise space with the permissions variant, where they get rid of proof of work and replace it with a less secure algorithm. We went the other direction. We had the most secure algorithm for enterprise, and then we decided to create the public ledger.

There was a logic behind that, because of our vision for what a public ledger should look like. That has everything to do with this council we can talk about. But that’s the history here. Last fall we spun out Hedera Hashgraph from Swirlds. Hedera Hashgraph is focused on the creation of this public ledger. It has its own governance body. It’s a separate organization with a different market and different use cases. Swirlds continues to focus on permissions and enterprise use cases.

VentureBeat: How did you raise the money, then? Is it qualified investor money, or is it a larger group than that?

VentureBeat: But it’s not a token sale, an ICO.

Harmon: It’s not an ICO, but it’s what we call a SAFT, a Simple Agreement for Future Tokens. It’s not equity in the company. It’s an investment, a security in the technical sense. But it will convert into tokens for the public network. There are no tokens today, technically. They have not been generated. There’s a whole discussion here about the regulatory environment and the SEC, how we go from where we are today to broad distribution of the token in the future, when it’s not a security.

VentureBeat: What is the regulator-friendly nature of this, then?

There’s a period of operation of the network for at least six months, some reasonable amount of time, and then stepping off the bridge is when we open the network up for general public use. The network will be operational while we’re on the bridge, but it will be restricted to developers, partners building applications. It’s a closed environment. When we open it up broadly to the public, we step off the bridge, and then the tokens are in the market. At that point our expectation is that they will not be considered a security.

VentureBeat: And then you have this council, a governing body?

Harmon: The council is 39 global blue-chip organizations. The governing council was designed to be the most decentralized governing body of any of the public platforms. When I say that, I mean we are choosing these council members to be representative of 18 business sectors. It’s not a bunch of banks that do two or three things. It’s all of the market across 18 sectors, and all geographies. We have council members today that signed letters of intent from Australia, Japan, the U.S., Europe, South America, India—I think we’re missing the Middle East, but we’re looking at the Middle East as well.

These are organizations that represent tens of billions in market cap. These are the best companies in the world, with the best brands. Collectively they represent the entire market of potential use cases. They manage, through oversight, the organization. They’re term-limited, so it’s not the case that they can be members forever. So they’re geo-distributed, market-distributed, and term-limited, so the representation will be reflective of the latest changes in the market over time.

Comparing that to the other platforms, the justification for the claim that it’s the most decentralized is that this is not a group of core developers making all the decisions, or a single foundation with a few people in it, or a single company. This is designed to be the most decentralized governing body of all the public platforms. They have oversight on all areas of the business. It’s like a board, except there will be subcommittees. There will be a board-level council of managers, and then subcommittees for legal and regulatory, a technical steering committee, coordinated marketing and PR, and so on, these kinds of committees that will, through an advisory function, and oversight function, help us build a world-class global organization.

VentureBeat: How would you say you got so much money raised here?

It’s the difference between a calculator and a computer. If you think about the range of applications you can do on a calculator, that’s where we are today with the first generation of distributed consensus. When you hit thousands, you open up a whole new range of use cases.