About four years ago, Jerry Cuomo and other technologists at IBM started to study blockchain, thanks to the phenomenal rise of Bitcoin and later Ethereum — cryptocurrencies based on the decentralized ledger that is both secure and transparent.

Now Cuomo is vice president of IBM Blockchain, and he interacts with more than 1,500 blockchain experts at Big Blue. Working with the Linux Foundation, IBM created its own fast and secure Hyperledger Fabric to build a more robust version of blockchain that can scale up to the demands of modern commerce and its millions of transactions per second. Hyperledger Fabric is gaining momentum as the infrastructure for created trusted networks in a wide variety of industries. Earlier this week, IBM said it is providing the IBM Blockchain Platform for Hu-manity.co to use blockchain to enable consumers to exercise control over the use of their personal data.

And Cuomo is spreading the word about the benefits blockchain offers all sorts of industries. Recently, IBM cut a deal with shipping giant Maersk to create a blockchain-based supply chain where you could instantaneously track shipped goods back to the original source in a couple of seconds. Already, 94 companies have joined the effort.

IBM is working with Walmart and others to pinpoint sources of contaminated food to the original source in an effort to reduce hundreds of thousands of deaths per year. Big Blue is working with the U.S. Food and Drug Administration to explore how blockchain can ensure patient consent for the transfer of health data.

VentureBeat: Do you do blockchain, or cryptocurrency, or both?

Jerry Cuomo: I’m blockchain. I’m an equal opportunity employer of whatever sort of application you want to write on top of blockchain.

VentureBeat: How long have you been focused on that?

When I really got to see what was happening under Bitcoin, I got excited, as excited as anyone on the crypto side. But I was really excited about applying this to other uses. IBM certainly caters to business and enterprise. I became very curious about how we can apply this technology to allow businesses to collaborate. It’s not a complete secret, or hard to imagine. Typically, in the world, a group of institutions or people can achieve more than any individual member of that group. One plus one equals three, or whatever you want to call the adage about the power of the group. It seemed like this could be a unique way to transform a supply chain, on one side of the fence, or how trade financing works, on the other side of the fence.

We got the spark of what could be. Once we started practicing this with some of the conventional technology of 2014–in blockchain years that was a long time ago. Ethereum was the gold standard, and it’s still very popular today. It’s great at what it does. But it’s what it didn’t do that started striking our fears. We’re trying to set up a decentralized network between institutions, but this institution needs to be accountable. The EU, pre-GDPR data privacy, or I have a HIPAA requirement–many of those networks require the members to be known and have some level of accountability. I need to be able to prove to an auditor that these events took place and I behaved this way. That’s what started making us scratch our heads. How do we do this with the conventional blockchain?

We came up with a set of ideas and we tried to apply them to Ethereum. We ran into a couple of roadblocks, one being the lack of modularity in the early code base of Ethereum. The other is the licensing model. It was an LGPL license. In IBM, or in any institution that wants to commercialize something, it would be very hard to commercialize something with an LGPL license. Last but not least, there was really no unified governing board for Ethereum.

Long story short, we decided we needed to take another path. The path we took was to start building a blockchain for business from the ground up. We didn’t try to do that by ourselves. We went to the Linux Foundation and they introduced us to several like-minded companies. Together we formed the Hyperledger Project. Within that project there’s a number of open-source projects, one of them being Hyperledger Fabric. IBM has been contributing quite a bit to that project, as well as State Street and Fujitsu and Hitachi and several other companies. We’re very invested in that. 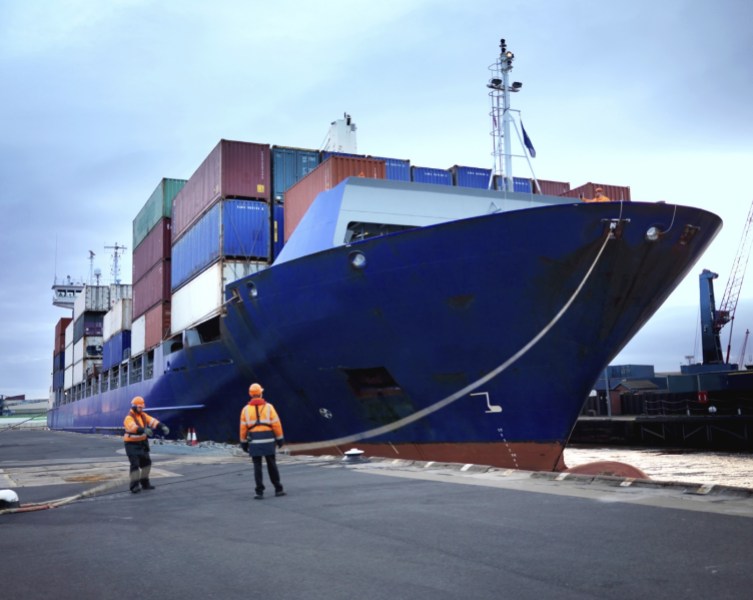 Above: IBM and Maersk are teaming up.

That forms the foundation of IBM Blockchain, which is a platform as a service offering. It forms the foundation of several solution ventures we’ve built with the likes of Wal-Mart and Nestle and Unilever. TradeLens, which is a trade finance network with the likes of Maersk. That’s our strategy. As I said, blockchain for business isn’t just a slogan. There’s some real hard engineering things that we had to do to provide the enterprise qualities needed.

I typically distill it down to four. There’s probably a few more, but four real succinct attributes. One is accountability. We get that through permissioning. You may have heard of permission blockchain. Simply put, members apply for a membership card, a public and private key issued through a decentralized certificate authority. Now you’re accountable. You’re known to the network. While you’re known to the network, the second one is privacy. While you’re known, you should be able to interact privately. In finance, there’s a lot of bilateral contracts and things like that. You don’t need everyone in the network to see your business. You just need the folks who are involved, who have a need to know.

The other is around performance and scalability. It’s known that Ethereum and Bitcoin purposefully don’t perform at high transaction rates. They’re designed not to because of how mining works and how they want to ensure–in a very clever way, blockchain networks are all about building trust. Those blockchains build trust while maintaining anonymity. It works for that use case, for currency, something trying to emulate cash, which is a bearer instrument. But they had to work in safety nets, like the group with the biggest computer couldn’t overrun the network. They put throttles in which hinder performance. But an enterprise blockchain has to support an immense volume of transactions, thousands per second potentially. That was the third.

The fourth is security. A blockchain network has to just keep running. It has to tolerate fault. In other words, it needs to keep running if there are bad actors in the network, and still roughly come up with the right answer. Or even sloppy actors, which in a permission blockchain are probably more the case. You have someone running on less reliable hardware that fails from time to time. The network can’t stop because one member is disappearing every so often.

Those are the four qualities we’ve built into Hyperledger Fabric. We started that with the Linux Foundation and the Hyperledger Project–it was announced in 2015. Three years into it, we’re really starting to see the first live networks happening, which is exciting. There are all sorts: big enterprises, small startups. There are hundreds of networks out there that are using Hyperledger Fabric. We have 70 of them on our radar right now that we consider live, meaning they consider that system the system of record. They have multiple institutions transacting on a daily basis on that network.

Some of them are small scale. Some of them are big scale. Some of them are small scale with big dreams. [laughs] Some are big scale with humongous dreams. We see everything in between. One of the things I’ve been talking about is–the exciting part about working on blockchain is working on middleware and helping usher in the transactive web. In the late ‘90s and early ‘00s, that was very interesting. I became a huge fan of some of the users of Java-based middleware. Many websites that we use daily still use that technology. But I couldn’t say necessarily that that technology was for good.

What I see happening with blockchain–while there’s all kinds of uses of it, I do see a theme in blockchain for good. It’s being used to protect people’s personal identity, or ensure that the information being fed into a clinical trial is correct. A drug that you’re taking hasn’t been counterfeited, or the food that has salmonella in it can be recalled quickly without affecting more people and without shutting down the whole U.S. production of spinach. These are all things that are good for you and I, not just for the industry.

VentureBeat: I’ve wound up in an interesting spot on blockchain. Most of what I do is supposed to be games, and then about 20 percent is tech, everything else. I cover a lot of big companies like IBM. That 20 percent has now been filled up. It’s a few blockchain stories a week now. It’s given me some knowledge, but it’s also confused me a bit as well.

Cuomo: What’s confusing, would you say? 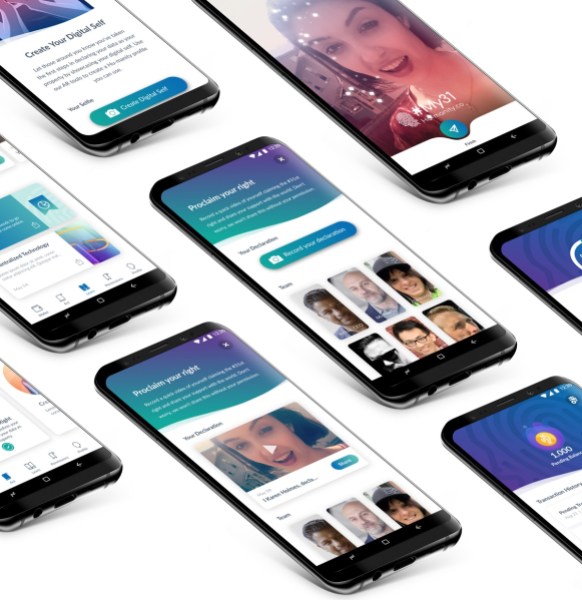 Above: IBM is working with Hu-manity.co to secure your right to control your personal data.

VentureBeat: I see the basic tradeoff of security and transaction speed. The original Bitcoin was not built for transaction speed, as you said. There’s different parties saying they have the next-generation answer to that. But they all seem very fragmented. I wrote quite a bit about Hedera Hashgraph, which is fascinating, but it’s just one of many. How many different slices of this do we really need? Do the banks need to do their own blockchain systems? Do the shipping lines need their own? Everybody’s taking a different whack at similar problems, depending on how much they care about security and transaction speed.

Cuomo: There’s a balance. What excites me, because I’ve seen trends evolve over time–I know a few things for sure, or at least my history suggests these things very strongly. One is, what we know today is going to be very different. For companies like IBM, I believe we’re doing very well in the blockchain space. In order for us to continue leading, we’re going to have to change. It’s evolving.

The material thing to measure–usage and community. Let me explain. The most lasting blockchain technologies are going to be the ones that are built in the open and that provide a fair platform for innovators, for people who have an idea. I’m not going to be locked out if there’s a small group that’s running the board on this. That’s why we like working with the Linux Foundation. They can be really tough sometimes on the way they govern, but it’s good for the technology. It usually breeds winners. Again, they’re blind faith over there. They don’t care if you’re |BM or a small startup. The rules are the rules. There’s a church and state separation between the governing board and the technical board.

What’s measured on the technical side are contributions: not dollar contributions, but code contributions. You can contribute financially, you can contribute via code, or some combination of the two. That fosters a lasting environment. Again, it may not be what’s here today, but those things–I believe, for example, that the Hyperledger project will evolve to be amongst the winners. It’s Darwinian, the way they do it.