VentureBeat: I was looking at another story I did recently, a company called Verses? Blockchain-based property rights in augmented reality. If you have your house and somebody goes and creates an AR world, they might put a virtual strip club on top of your house. They have things like designated areas for certain things. In the area of a school, the school owns the rights to the AR presence around that space. You can’t put a liquor store in the school zone. Or I would own the AR environment around my home, so nobody could plant something on top of it the way Pokemon Go has put PokeStops everywhere. They’d use blockchain in this process to figure out who owns what and where.

Then it becomes a question of, which virtual world is the one that gets the ownership of my space? You run into so many interesting ideas. We have asset-based token sales happening for real estate now, too.

Cuomo: I said there were thousands of uses of blockchain, and crypto is one of them. I think tokenization is on that spectrum of crypto, but it’s not. We see many of the networks build around a digital token. Asset-backed tokens are very popular. We worked with a company in Canada called Interac. They’re doing carbon credits, almost gamified carbon credits. You can basically tokenize your carbon savings. Interac is the premier payment card provider in Canada. They have relationships with all these retailers. As a loyalty point almost, you can exchange your carbon credits. They’ve created this token and this incentive system. The asset-based token thing is a big deal.

VentureBeat: How does IBM figure out, here’s what we want to put a billion dollars behind? So many things are flowering and fragmenting.

Cuomo: My boss quoted this statistic, and it kind of floored me at first. She recently counted up the number of people we had working on blockchain at IBM. She came up with about 1,500. It’s quite the investment on an emerging area. Predominantly, those folks are engagement-oriented. They’re client-facing. But investing in blockchain–simply put, once a business process is executed on a blockchain, there’s no going back to a traditional model. The question is, how do we help shepherd in this era of blockchain in a way that’s prudent?

There is a core investment that has to occur. There was no foundation in 2014 to build a blockchain for business. Today there are multiple choices, but in 2014 there wasn’t a lot of ways to do permission blockchain. We had to go out and help build that. There is a sunk cost investment. I think overall, we’re looking to not just talk the talk at IBM, but walk the walk.

What I mean by that is, we’re going to have traditional IBM businesses. We’ll have consulting. We’ll have technology platforms. That will help pay off some of the investment we have. That’s talking the talk. But as important–Ginni Rometty, our CEO, is hell bent on us being a blockchain business, meaning that–No business runs in isolation day. We’re no different. We have many business partners and suppliers. We must apply blockchain to provide, first and foremost, better efficiency, marketing, advertising networks like Mediaocean. In many aspects of our business, we’re not going to wait. We’re going to help convene those networks. We’re going to sit there and say, “There’s a better way to do this.”

We have a channel finance network that we’re a part of. We lend out $44 billion a year in channel financing for computer suppliers. At any given time, there’s $150 million locked up in disputes. It’s simple. A supplier supplied a buyer. The supplier says, “When do I get paid?” The buyer says, “I’ll get paid when I get the item.” Supplier says, “I sent it two weeks ago!” We have to reconcile — your books, my books, his books — to figure out what happened. It takes 44 days to resolve a dispute, on average.

With this blockchain-based dispute mechanism that we have sitting next to the supplier network, we can now resolve disputes in 10 days or less. As a lender, we want to put our money back to work. And then the question is, with 4,000 partners and suppliers in that network–right now only about a dozen or two have been invited. We’re rolling it out slowly. It’s a long tail, where 20 percent of the suppliers do 80 percent of the transacting and then it flattens out. We’re trying to get the bigger ones on the blockchain first. But who wants to be tied up in a dispute? We don’t. They don’t. It’s good for everyone.

Being a blockchain business is the cherry on top for us. From an investment perspective, it’s a multidimensional investment. Yes, we have to invest in core technology where it doesn’t exist. Yes, there will be winners and losers, but there won’t be just one winner. We know how that game is played. We’ve played it before. There’s no guarantee, but we’ll use the Darwinian principles we’ve learned before. We’ll provide a service to make blockchain easy for enterprise, which we have in the IBM blockchain platform. We’re going to invest in networks like the food network, like TradeLens. That will justify the investment, and hopefully make returns on our investment to our shareholders.

As I said before, about blockchain for good–I’ve been working technology for quite some time. This is a technology where I can see it impacting society, with Humanity as the latest example. It’s the kind of thing that’s inspiring about this technology. It’s not just a technology. It’s a way to behave. It’s about the group accomplishing something that would be very difficult for one individual member to do by themselves. That’s what leads to good. You can’t get visibility across your food supply chain and do a recall if it’s just one company. Even Wal-Mart.

I also talk about blockchain for good meaning that it’s here for good. It’s here to stay. That’s the other side to it. I really think blockchain is changing everyday life. It’s not that it will or it can or it might. We’re not at the moon shot yet, the super big things, but there’s enough evidence on a daily basis to make me smile. 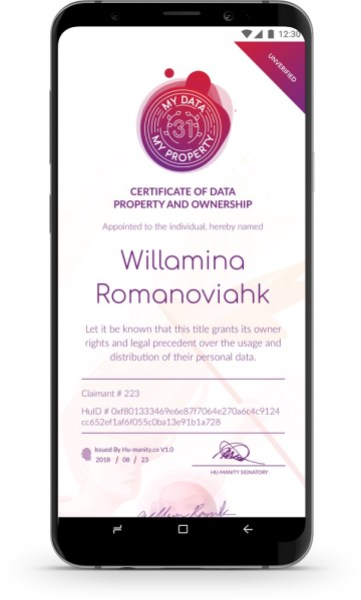 Above: IBM and Hu-manity.co are coming up with a way to verify who can access your data.

VentureBeat: That was one of my last thoughts too. How much do you need to have consumer adoption and institutional investors coming into this? That’s generally what I hear about the crypto world, that they want everybody to have a consumer wallet app so they can turn around goods on their phones. They have all these institutional investors putting money in things like ICOs because all the fraud has been rooted out.

Cuomo: Payments and fundraising, as I said, is one application. If you’re Frank Yiannas, and your world revolves around the quality of food, that’s your currency. It’s like saying the only application for the Linux OS is an ATM. An ATM is a really good thing, but it’s not the only thing. People are jumping tracks. I think tokenization can be used to help incentivize these ecosystems. That’s good. There is certainly life around using blockchain-based crypto environments to generate funds. There are use cases like True Tickets. Whether cryptocurrencies and ICOs are working or not, that idea has legs. If crypto dies, or if crypto quadruples, it’s still valuable if you’re in the event business.

Could they do an event ICO ticket where you own a piece of a Rolling Stones show? Maybe they could. But that’s a funding model. Blockchain is not indigenous to funding models. You can use it to create one hell of a decentralized funding model. But it’s a technology to help foster that as one very powerful use case.

Quite frankly, I think there are three killer applications that I’ve seen. One is payments. Maybe that’s the only one that’s proven itself so far as a blockchain thing. Bitcoin has been running since 2008 or whatever. It’s pretty strong. Digital identity is number two. Number three is supply chain. Those are killer apps. This technology was made to at least serve those things.

The other thing is, those three things are fairly pervasive across industries. Every industry needs payments. Every industry needs to identify and verify and validate. Every industry has some form of supply chain, whether it’s a drug being produced and you’re trying to show what the steps are in a clinical trial, or the authenticity of a drug, that it hasn’t been counterfeited, or spinach or mangoes. Those three are killer apps.

VentureBeat: The interesting question to me is whether or not governments should be supporting something that ultimately wants to get rid of centralized authority. We need regulation on some of these things, but eventually they might push themselves into obsolescence.

Cuomo: As I mentioned before, the difference between Bitcoin and blockchain is better understood by government. I think our government could learn some lessons from other governments out there that have been more progressive toward the use of blockchain for land registries and identity, like in Dubai.

The cool part is–I’m biased, yes, but a lot of the core technology, when you look at the ripples here in California around things like cross-border payments–the Hyperledger Project is anchored here in the Valley, with Intel and IBM as big contributors. There’s a lot of startups. There’s a lot of innovation in the space of blockchain, similar to the innovation that happened in the early web. Our government should take advantage–while they’re looking at what to regulate, which is probably more on the currency and payments side, they shouldn’t wait for that to be all set up before they embrace.

If I never have to go to the DMV to register a car, or if I never have to go through title insurance when I refinance my mortgage–come on! Don’t you know that I own this house? Do I really have to provide it for the fiftieth time? Can we at least address that while the regulators look at everything else?