When crop, dairy and livestock farmers register their data into the platform, consumers such as restaurants can directly purchase the farm products, and Planet Table delivers them all at once. For both the food suppliers and consumers, orders are collected together in one lump payment and not processed as individual orders. The service commenced in central Tokyo area (in parts of Shibuya, Minato, Shinjuku, Chuo, Chiyoda, Setagaya and Shinagawa wards) under a specially-approved registration system.

According to Planet Table’s founder and CEO Shin Kikuchi, he said that his company charges 20 to 30% of the food cost as a fee for using the platform which handles the sorting of goods and delivery. He eventually will fix the price range depending on the food category. 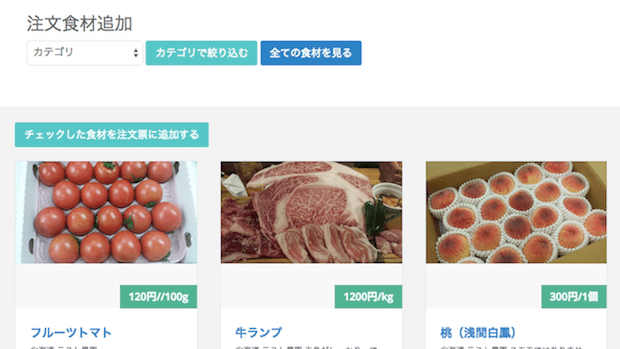 Since its launch back in May of last year, Planet Table has launched The Round Table, a food and agriculture-focused online news media site, as well as FoodQ, a food and nutrition-focused mobile Q&A app for consumers. They had been operating the Send platform as an online farm-fresh delivery service in a limited area on a testing basis since April, but it was recently officially launched.

Our aim is to carefully connect a wide variety of supply with demand. 30 to 40% of farmed products in Japan are not sold on the market, so some people can effectively take advantage of this fact. Malformed tomatoes can be used in pasta sauces for example. All we have to supply in such a case would be fully matured tomatoes that don’t necessarily have the perfect form.

Fulfilling such small requests and availing a new way of using food that has been wasted and discarded in the past provide the basis of this system and the role it seeks to play.

We are to be a distribution center for food producers and a direct farm food storage facility for chefs and patissiers. Traditionally, these consumers order the number of tomatoes they want by FAX. We streamlined the process using order sheets to be filled out upfront, so all consumers have to do is enter the number of items they’d like to order.

Restaurants don’t just put things they want into a shopping cart when they want to buy products, it’s not like regular shopping. If the menus have been decided on, then that food list will be used repeatedly, so they just have to create one order sheet to reorder from again.

The ordering system format of the Send platform was devised by chefs from eight restaurants Kikuchi knows. If the Send platform collected and sent out orders individually then it wouldn’t be very efficient so Planet Table bunches the orders together and orders certain numbers of each product to food producers. Producers then just send the food for a buyer all in one box to Planet Table. Planet Table then takes care of the delivery of these goods to the restaurant which ordered them.

Planet Table has an excess inventory to reduce the time lag from receiving orders to procuring foods from producers, enabling same-day or next-day delivery. By carefully analyzing the trends of orders from each of the restaurants, the company now can prevent a food loss ratio from rising above 3%, but Kikuchi believes that he can lower it further.

In Kikuchi’s phrase, he wants to make the platform a POS (point-of-sales) system for 10,000 restaurants in Tokyo where each customer spends more than 5,000 yen (about $40) for a dinner. By putting individual orders to and deliveries from different food producers together using the platform, restaurants can reduce shipping costs and pay all the bills for ordered foods by remitting to Planet Table once a month.

The company’s approach is very analogue because it owns refrigerators and an excess inventory of foods, which may be far from the recent trend of businesses without their own asset or risk. However, securing food and health safety originally required great care. I believe that wasting foods worth over $90 billion annually in Japan is a huge problem to solve.