PayPal believes it has made it easier to give back with a revised mobile app that now includes a dedicated “donate” button. A press of this button starts a process whereby you can give to any of the tens of thousands of charities that participate in the payment processing company’s PayPal Giving Fund.

According to The Giving Institute, an organization that measures philanthropy, Americans gave $373.3 billion in 2015, with individuals providing more than two-thirds of that amount. And when you look at the current mobile landscape, if you wish to donate to a charity, there’s no centralized area from which to do so — can you contribute through Facebook? Square? Google? LinkedIn? Snapchat? And PayPal wants to be the market leader for all things payment-related, be they commercial or philanthropic in nature. 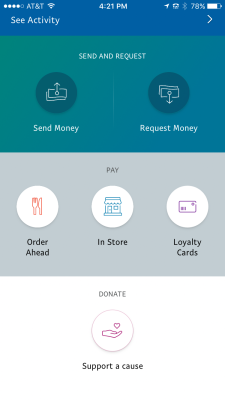 The company does have a track record when it comes to fundraising, although it has hit some bumps along the road. Last year, it participated in Giving Tuesday, running a campaign to set a World Record for the “Most Money Raised Online For Charity in 24 Hours.” It raised $8.6 million, but this time around, it vastly surpassed that amount with $45.8 million raised for multiple charities.

“PayPal is committed to harnessing the power of technology and scale to build a worldwide network for good that inspires everyone — whether individuals, charities, or global brands — to take action and support local communities and the causes they care about,” the company told VentureBeat. “In-app donations offer donors the added ability to support the causes they care about at any given moment of discovery from their mobile phones.”

PayPal shared that 38.7 million people donated $6.6 billion through its platform to charities, and 23 percent of these donations were made on mobile devices. With such interest, it’s logical that the company would add a dedicated button to its app. The idea is that now you won’t have an excuse to avoid donating to the American Red Cross, St. Jude Children’s Research Hospital, UNICEF, Feeding America, the World Wildlife Fund, or Charity Water. Just take out your phone, open up PayPal’s app, and tap a button.

The process has been streamlined, so that when you opt to donate to a charity, it’ll all be handled within the PayPal app. No longer will you be taken to an external site to complete your donation. The company said that 100 percent of every donation will be received by the designated charity, so you won’t have to worry that part of your charitable giving will be ripped away to fund any administrative costs.

Not everyone will see a Donate button right away, as the feature’s rolling out over the next couple of weeks. However, you’ll know when you have it, as it’ll be front and center on the home screen.