European mobile-first bank N26 has announced that it is expanding into insurance in its latest move to reinvent banking.

Founded out of Germany in 2013, N26 offers bank accounts similar to those offered by BankMobile or Simple in the U.S., with a focus on speed and efficiency — an account can be opened within eight minutes of applying. Originally only available in Germany and Austria, the service has slowly been expanding across the Eurozone and now claims 300,000 customers in 17 countries. N26 has raised more than $50 million since its inception, with participation from notable backers such as Peter Thiel’s Valar Ventures, which led its Series A round back in 2015 and joined again for the $40 million Series B follow-up a year later.

Formerly known as Number26 — before a rebrand last summer— N26 has a long-stated mission to create a modern, mobile-first bank built from the various fintech technologies and services that have emerged from the internet age. Last February, for example, N26 partnered with peer-to–peer money-transfer firm TransferWise, giving Number26 customers in-app access to a cheaper money-transfer service.

“Our goal is to leverage the best banking products from around the world and make them accessible to customers with one tap, creating a fintech hub inside the Number26 app,” N26 cofounder and CEO Valentin Stalf explained at the time.

The TransferWise collaboration was followed by a new investment product in conjunction with Vaamo and a savings account in partnership with Raisin. And now the company is adding insurance to the mix thanks to a tie-up with German Insurance platform Clark. N26 calls this the “next step” in its strategy to become the one-stop app for its users’ every financial need. 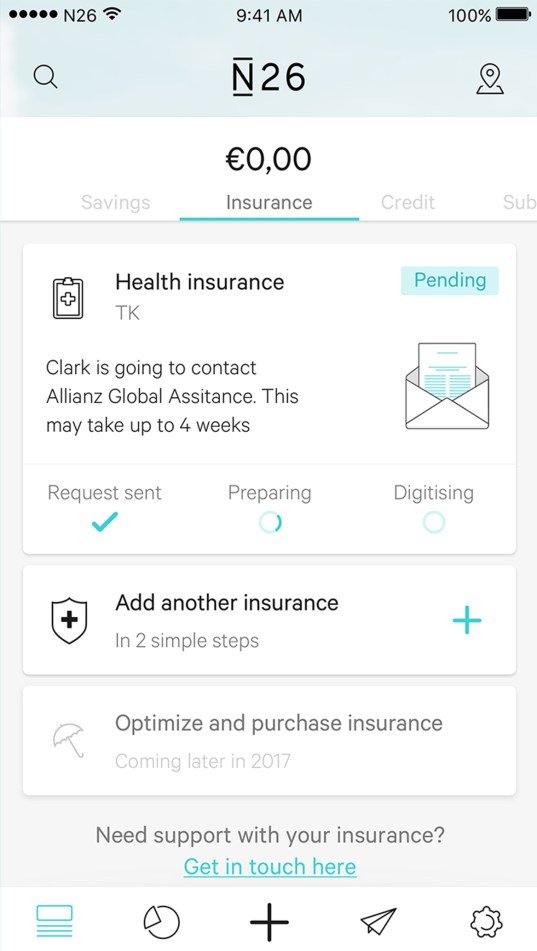 “Digitalization in the insurance market is lagging behind,” said Tayenthal. “Customers are still facing offline structures and a lot of paperwork. It is therefore a huge opportunity for N26 to address these customer issues by leveraging digital innovation to make Insurance more user-friendly.”

Operating in a piecemeal way makes sense for a startup looking to expand in the finance realm. Given the regulatory, operational, and financial hurdles of expanding into multiple verticals, it’s much easier to tap existing players in their respective industries and package their services together in a single app.

Through N26, customers will be able to view all their insurance policies and initiate claims with a few taps. In the future, N26 said that it will also enable its users to “make smarter decisions” by helping them optimize their insurance plans, powered by Clark’s algorithmic robo-advisers.

A beta program for N26 insurance will be kicking off in July, with the first offering landing only in Germany initially.

“This partnership is the next step in our plan to partner with financial institutions and make our robo-adviser available to their customers,” added Clark CEO Dr. Christopher Oster. “Our API-based integration will deliver a fully digital insurance experience and ensure that customers have the right insurance at the best price available.”