Today Shopify is launching a mobile app that allows consumers to sell their wares through social channels. This is the first time the commerce platform has broken away from its shopping cart and point-of-sale business.

The app, called Sello, allows anyone to take a picture of an item, price it, choose shipping options, and push a link to Twitter, Pinterest, Facebook, Instagram, Tumblr, and seven other social media channels, as well as other platforms that use share extensions. 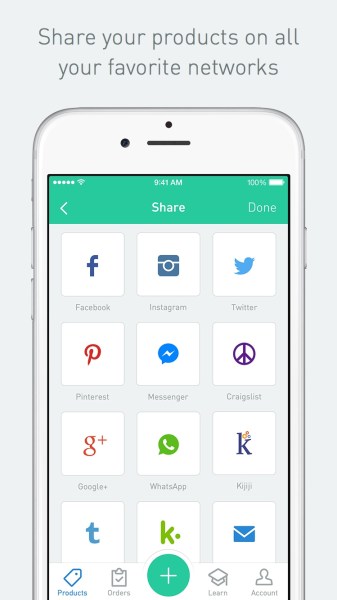 Interested consumers can click the link to purchase the advertised items and pay with PayPal, a credit card, or even cash. Merchants and consumers will have to arrange in-person cash payments themselves, but it’s an option most payment platforms don’t offer. Also, the addition of PayPal as a payment method reduces the cumbersome task of having to fill out shipping or billing information.

With this new app, Shopify is hoping to latch onto the growing number of people who want to work for themselves in the U.S, UK, and Canada. And it’s not the only company angling to serve this population. In spring of 2014, Etsy launched an app for sellers called Sell on Etsy and, this year, eBay revamped its mobile app to simplify the selling process, folding its premium valet service into its core app. But Shopify maintains that Sello is different, because it’s directed at budding entrepreneurs.

“We assume there are going to be people who are selling very occasionally, like used goods or collections or whatever. But I think we’re putting [Sello] into the hands of people who are aspiring entrepreneurs,” said director of product for Sello, Christopher Lobay. In this way, Sello is a bit more like Etsy’s seller app, though it doesn’t have a marketplace. Buyers will only find Sello products through individual merchants’ social media accounts.

To appeal to these new entrepreneurs, Sello is including a series of tutorials that walk sellers through best practices, and offer insight into how merchants can use social media to its fullest potential.

In addition, the app represents a gateway to Shopify’s full platform. If fledgling merchants can make enough sales on Sello to justify expansion, eventually those merchants will need more robust point-of-sale and ecommerce solutions. That scenario is what Shopify is banking on.