Square ($SQ) has announced the results of its fiscal fourth quarter earnings, revealing that it generated $452 million in net revenue, an increase of 21 percent from last year, but had a net income loss of $15 million.

As it relates to gross payment volume (GPV), the company processed $13.7 billion for the quarter, up 34 percent year-over-year, while for the year it handled $50 billion, an increase of 39 percent annually.

“In the fourth quarter, we continued to see strength from larger sellers, whose GPV grew 47 percent on a year-over-year basis and accounted for 42 percent of total GPV, up from 39 percent in the fourth quarter of 2015,” Square said in its shareholder letter. 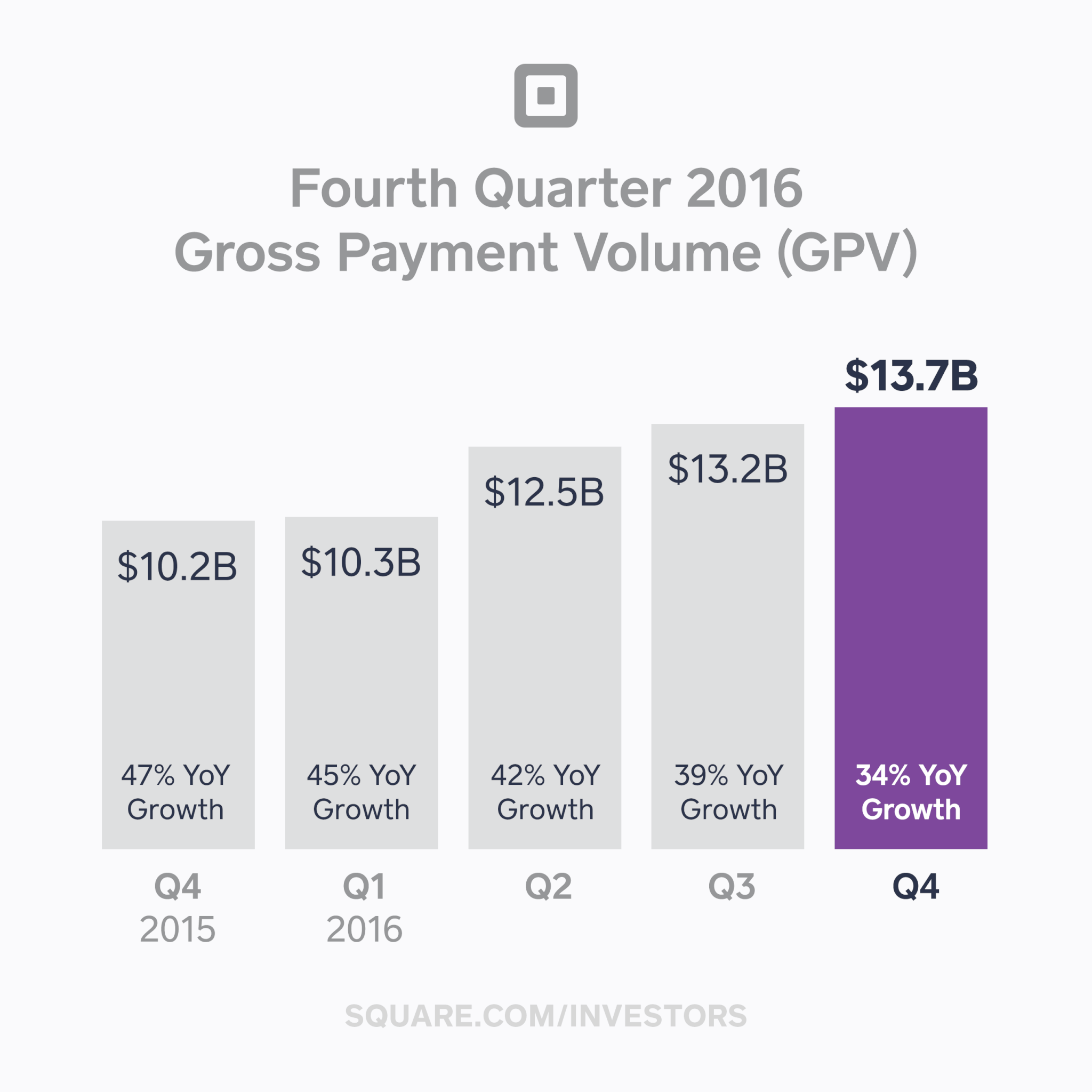 Wall Street analysts set expectations that Square would bring in $449.6 million in revenue and $1.7 billion for the year.

Shares in the company closed the day up 2.80 percent at $15.04. In after-hours trading, it’s up more than 5 percent. Annually, Square’s stock price is up nearly 45 percent, and it received a boost when Citigroup analyst Peter Christiansen penned a report describing Square as being “both a ‘new market’ and ‘low-end’ disrupter who is building its leadership in the micro and small business commerce enablement space — a large category that has historically been underserved.”

Much of Square’s quarterly revenue came through transactions, which grew 35 percent from last year to be $402 million. It made up 2.94 percent of Q4 GPV. Subscription and services-based revenue was $41 million, up 81 percent from Q4 2015, and largely driven by growth in Square Capital, Caviar, and Instant Deposit revenue. Hardware, such as Square Stand and its iconic reader, amount to $9 million, an increase of 39 percent from 2015. The company attributes the growth to the sales of its most recent contactless and chip readers which have been on sale for the past year.

The fourth quarter is something that investors had been paying attention to since it’s the first three months in which Square said it expects “nominal” revenue and transaction profits from Starbucks. The partnership between the two has been terminated, with the food and beverage merchant weaning itself off of Square’s infrastructure. In today’s announcement, Square said that total net revenue growth “was impacted” by no longer having Starbucks’ transactions and once again reiterated it does not “expect to generate Starbucks transaction-based revenue going forward.”

What everyone wants to see, though, is whether the company can really expand beyond its cash cow market — small businesses — and tap more up-market. This quarter, Square continued its march to prove doubters wrong and show that it can indeed not only provide its user experience to not only mom and pop shops, but also those retailers with multiple locations and beyond, both in the U.S. and abroad.

In the past quarter, Square has since brought its Build with Square program to Australia, the first location outside North America, and also launched its first vertical-centric app offering, tailored specifically to the needs of retailers. The company claimed that in two months, its virtual terminals for browser-based payments, which launched in October, generated GPV of more than $40 million in January.

And it has doubled down on its integration with Apple Pay, incentivizing sellers with savings of $350 in processing fees if they not only use the Apple payment system, but also display the marketing signage.

One major effort to support the growth of its merchants is Square Capital. The offering continues to grow, with 40,000 businesses loans given in the fourth quarter, totaling $248 million, up 68 percent annually, with a default rate of “approximately 4 percent.”

Much of the success has been attributed to Square’s new products that have launched since 2014. The company said that they make up 14 percent of total net revenue and 25 percent of its adjusted revenue in Q4 2016.