On the surface, starting an ecommerce business seems pretty straightforward. However, merchants face a litany of issues to deal with, including fraud. For small businesses, fraud protection can be an expensive service that gives little information to make corrective actions. Stripe has spent years developing and fine-tuning its in-house fraud detection service, and today, it’s making that available to its customers.

Called Stripe Radar, all merchants on the platform now have access to this detection algorithm that provides insights into particular activities. Not only that, but a toolkit enables customers to customize the machine learning tool to their workflow, not the other way around.

“Talk to any internet business and you’ll frequently hear that fraud is a huge pain in the neck for them,” explained John Collison, Stripe’s cofounder. “Anyone trading or doing business online has this problem.” He said that while there are machine learning-based systems available today, it’s often difficult to discern what they’re actually doing. And predefined rules and heuristics, such as implementing a blanket ban on prepaid cards if a few incidents of fraud are detected, are a bit of a blunt instrument. “There’s not a precise way to do this,” Collison said.

Stripe is trying to help by opening up the power of its network, one that’s supporting hundreds of thousands of businesses. Instead of hiring a team of data scientists to decipher whether an activity is fraudulent, businesses can leverage Stripe’s database, which tells Radar not only the frequency of a card’s usage, but what the user’s expected, normal, or abnormal behavior is, including the IP address that’s making the transaction and much more.

“We now have an enormous amount of data to bring to bear now that half of all Americans have bought from a Stripe-powered business,” Collison claimed.

Normally, when a system registers fraud, the card is blocked, but businesses may not be told why that happened. Stripe Radar will provide more detail because it’s not just the false negatives that are bad, but the false positives as well — events where a card is declined for the wrong reason and as a result, the merchant misses out on a sale. 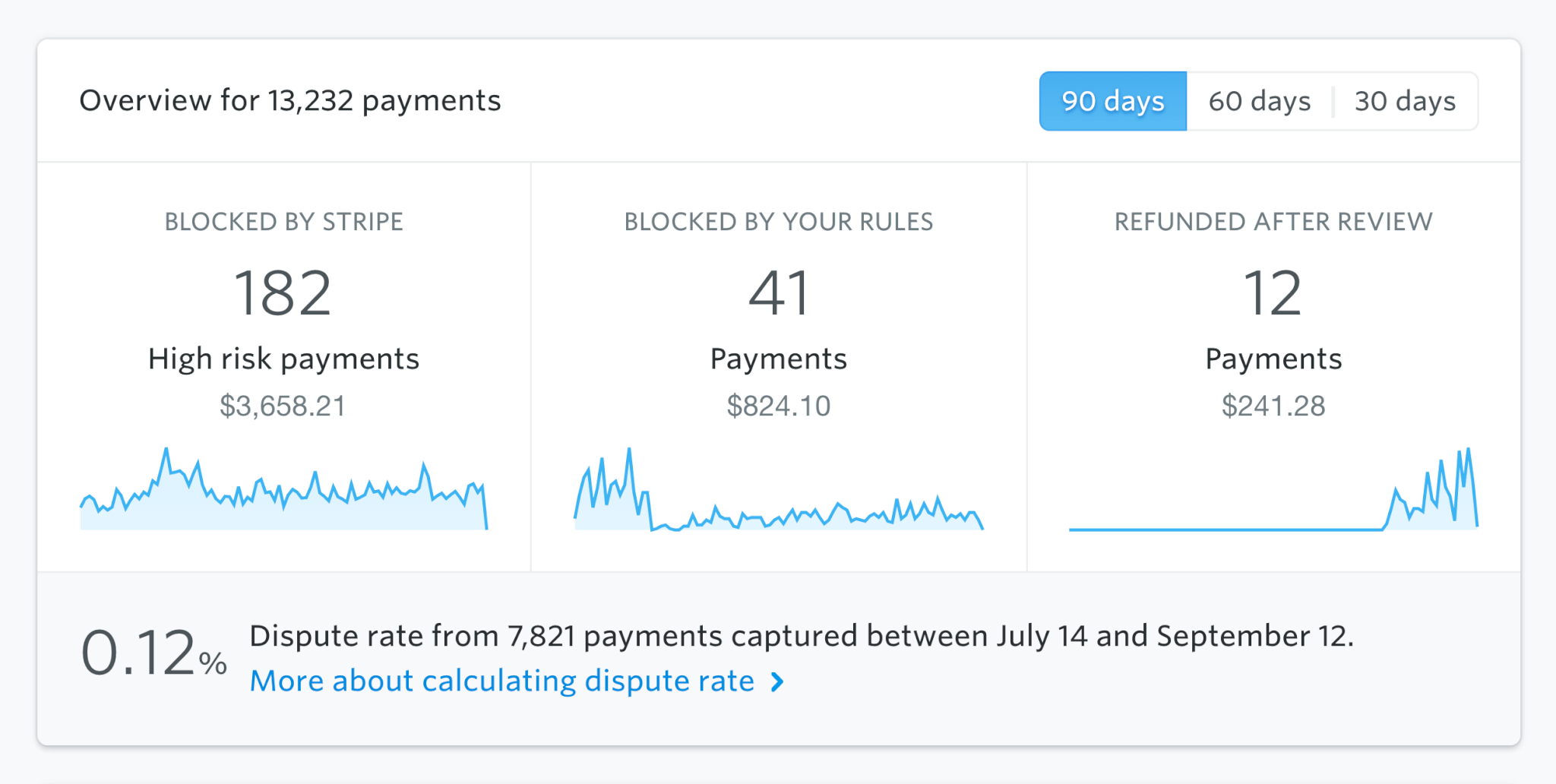 Above: Overview dashboard in Stripe Radar.

But the payment processing platform recognizes that it’s not a “one size fits all” model, so Stripe has built a toolkit that makes Radar fit into how merchants feel comfortable. Collison believes this represents the first time someone has fully integrated customization and machine learning into a fraud detection system. If you operate a premium company, for example, you might instruct Stripe Radar to notify you of suspicious transactions over a certain limit and require you to contact the customer directly. But how should the system respond to international transactions or if a card is used more than once in a day? You decide.

Stripe’s dashboard will also show the number of high-risk payments Stripe blocked and the ones that were prevented because of established rules. It’ll also display the merchant’s dispute rate percentage.