Animoca Brands and its subsidiary, TSB Gaming, said that The Sandbox blockchain-based gaming world is gaining momentum with its marketplace where players can buy or sell user-generated game items and virtual land based on nonfungible tokens (NFTs).

The Sandbox Marketplace debuted last week. It’s a place where folks could use their $SAND game currency to purchase a wide range of NFTs created by a variety of artists. The first phase of the beta shop includes just over 100 NFTs from 46 artists, and the company will be adding more gradually, before opening the marketplace to everyone.

NFTs use blockchain, the transparent and secure decentralized ledger technology that can verify the uniqueness of collectible NFT digital items. NFTs have exploded in other applications such as art, sports collectibles, and music. NBA Top Shot (a digital take on collectible basketball cards) is one example. Published by Animoca Brands and built by Dapper Labs, NBA Top Shot has surpassed $500 million in sales, five months after going public to a worldwide audience. And an NFT digital collage by the artist Beeple sold at Christie’s for $69.3 million. Investors are pouring money into NFTs, and some of those investors are game fans. 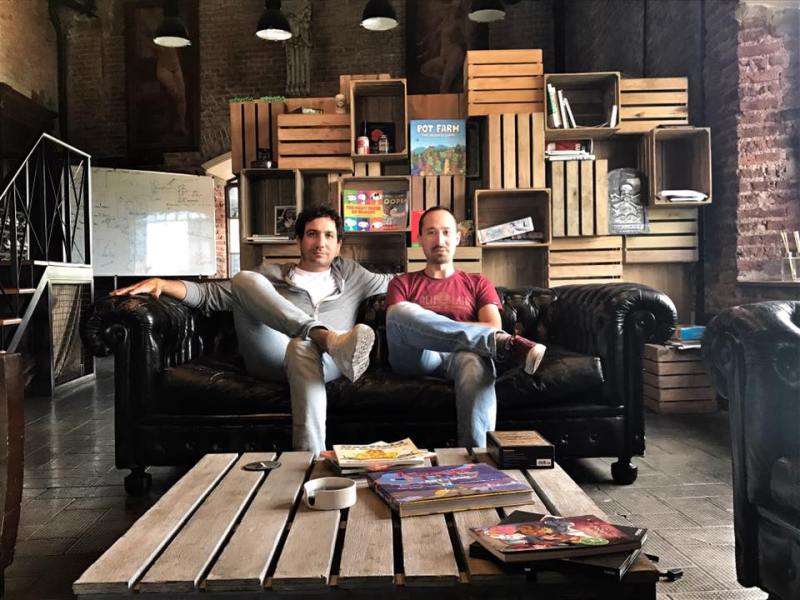 The Sandbox has been around for eight years as a virtual world where players can build, own, and monetize their own voxel gaming experiences. But under the ownership of Animoca Brands, TSB Gaming is building a version based on the Ethereum blockchain. The team’s vision is to offer a deeply immersive metaverse in which virtual worlds and games will be created collaboratively and without central authority.

The Sandbox features three main components: the VoxEdit NFT (nonfungible token) builder for building voxel game assets, the Marketplace for buying and selling assets, and the Game Maker tool where complete interactive games can be constructed and shared. Together, these components offer rich, easy-to-create voxel worlds and game experiences and the ability to safely store, trade, and monetize creations through blockchain, allowing creators to benefit from their creations. It’s all part of the plan to become the metaverse is the universe of virtual worlds that are all interconnected, like in novels such as Snow Crash and Ready Player One.

How the marketplace works

Sebastien Borget, the chief operating officer of The Sandbox and TSB Gaming, said in an interview with GamesBeat that The Sandbox is gaining momentum from the addition of new partners, artists, celebrities, and gaming studios.

“It’s quite busy in terms of our virtual real estate Land sales,” Borget said. “We got many influencers, celebrities, artists, investors, and others who want to buy Land. They understand the value over time. We’ve never seen so much activity.”

He said the process for buying and selling in the marketplace is simple. Once you have your account set up (you can do it just with an email or a social web 2.0 login), you just load your wallet with $SAND (the main utility token of the platform) and can then purchase directly in $SAND any of the NFT on sale at the marketplace.

“It’s very easy,” said Borget. “I can select the NFT I want to put for sale. It’s already minted and I just have to put the number of copies, the price at which it will be selling, and within one transaction it will go live on the marketplace.”

When you want to find something, there are many filters available. You can search by type of NFT, behaviors in-game, attributes in-game, tags, and rarity. For each NFT, you can preview it in 3D as well as all of its animations, so as to project both its appearance and its utilization via the no-code Game Maker.

You can also see and play with your NFTs, which is something unique in The Sandbox. You can wear the NFTs and show them off on your avatar, rather than keep them secluded in a private collection, Borget said.

These NFTs fit into four main categories: game entities, wearables, equipment for avatars, and art (aesthetically pleasing and rare collectibles). These NFTs have a utility both for players and creators in the metaverse.

In the first 24 hours, the marketplace saw 1,314 unique transactions for NFTs, generating 331,000 SAND tokens volume of sale (about  $211,000), distributed among the 46 artists who participated in this launch.

“We’re thrilled to see how this is truly making an impact into artists lives already, and to share 95% of the revenue to the artists,” Borget said. 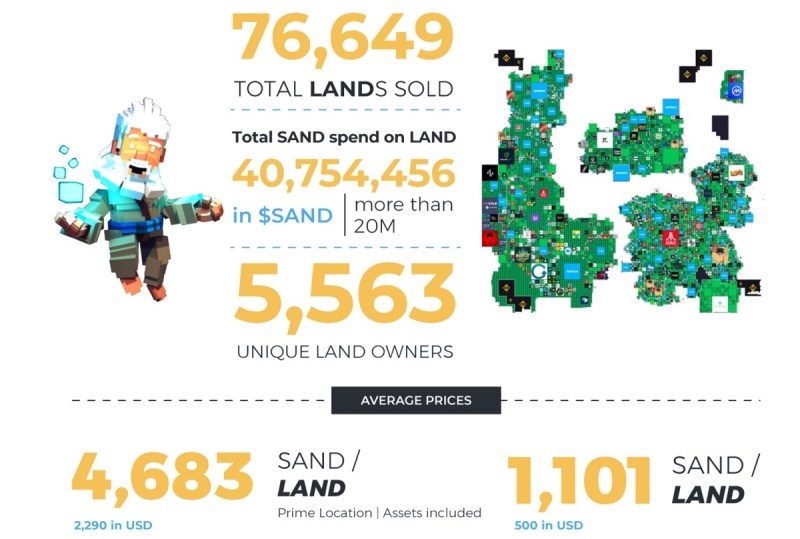 Above: The Sandbox has sold 45% of its land so far.

As with previous partners, the new entrants have joined in The Sandbox’s virtual real estate by acquiring Land NFTs in the open metaverse and committed to building experiences across the metaverse. To celebrate the new partners, The Sandbox will launch a new Land sale on April 13 that allows players to purchase choice spots near partner Lands.

The involvement of the partners announced today follows the beta launch of The Sandbox’s NFT marketplace, which gives anyone the opportunity to earn $SAND, The Sandbox’s utility token, by monetizing voxel-based NFT creations created with the dedicated software VoxEdit. Each NFT can be used inside the game platform in the future or used to build custom game experiences. Land NFTs are the main gateway to publishing games in The Sandbox, as the platform prepares for opening its first public beta for players later this year.

The Sandbox’s upcoming Land sale event on April 13 will offer additional premium Land located near the partners announced today. Each purchasable Land will include exclusive premium NFTs and have the possibility to host events, gaming experiences, or social hubs when the game is released later in 2021. The Sandbox has already sold 45% of its 166,464 Land NFTs, releasing them in successive waves. Existing Land owners include Binance, CoinCheck, Metakovan, Pranksy, Socios, and CoinMarketCap among others. On the secondary market, hundreds of thousands of dollars of Land are selling each week.

“We started pre-selling Land in four rounds since December 2019 and are now selling in public sales with regular waves, introducing new partners, brands on the map each time,” Borget said. “Each Land is a unique NFT that is primarily minted by The Sandbox and then transferred to the future land owner. No two Lands are identical due to their locations.”

Brands will coexist through neighboring lands, able to function as digital concert arenas, theme parks, or malls that users of The Sandbox can visit and experience by themselves or with friends.

Arthur Madrid, CEO of The Sandbox, said in an interview that he believes several hundred brands, and even heavy metal bands, are expected to come into The Sandbox every year. He said he is proud that there are more owners in The Sandbox (over 5,000) than other decentralized virtual worlds.

“If they invest in The Sandbox, they get a permanent presence in the metaverse in the virtual world,” Madrid said. “So if you believe that the open metaverse is going to be the future where people will spend time play, earn, work, connect, I think a presence into that may be very is important.”

“The Sandbox is revolutionizing gaming by empowering users to build, own, and monetize their gaming experiences in a virtual world that is decentralized,” said Tyler Winklevoss, a cofounder of Gemini Exchange, in a statement. “We plan to extend our existing platforms into The Sandbox and develop unique experiences on our properties that advance our mission of empowering the individual through crypto.”

The Sandbox has secured over 60 partnerships, including The Smurfs, Care Bears, Atari, CryptoKitties, and Shaun the Sheep, to build a fun, creative “play to earn” platform that offers virtual worlds and game experiences owned and created by players. The play-to-earn model gives players true ownership of anything they collect in the game, allowing them to trade it to other players (including outside the game on other websites), transfer it to other players, or even resell it.

The Sandbox is scheduled to launch its full alpha for players in the second quarter, enabling anyone to experience a social hub and gain the power to build a fantastic collection of fantasy and role-playing adventures that can be traded as NFTs with other players, creators, and artists on the platform.

The Sandbox team has grown to more than 100 people. The Sandbox is still on the Ethereum blockchain, where transaction costs are a factor. But the company is working on a Layer 2 solution, which could lower the transaction fees and speed up transactions.

Madrid thinks that other sandbox worlds like Roblox and Minecraft will eventually migrate to NFTs. When that happens, it will be a big endorsement for the strategy of The Sandbox.

“The most important goal is to build a great game,” Madrid said. “If you do that, then people will come. They will play. And they will earn.”