Editor’s note: Forget the tired “games as art” topic. Nicholas is ready for the “games as education” discussion, starting with an upcoming handheld title that has the power to make people think as much as it entertains. -Shoe

Scribblenauts’ main character, Maxwell, is kid-friendly and
proves that there’s power in the knowledge of vocabulary.

When I was in elementary school, my English textbook had lots of left-hand pages filled with spelling and grammar lessons, with lots of right-hand pages filled with sentences to fix. My family wouldn’t even buy our first computer until I was in seventh grade, so I had no word processor and no Internet for reference. I would sit there with my textbook open, writing down the correct solutions to the sentences in my notebook.

When I went to high school, every year for four years we received a rather meaty vocabulary book for English class, which meant there was at least one vocabulary exercise per week in addition to regular English class homework.

Now, all of that hard work and trial-and-error eventually paid off for me. I received an English award my freshman year of high school, and staying dedicated to English in high school more than prepared me for the paper-writing challenges of college.

But that strictly textbook approach doesn’t always work for everyone.

People learn in a wide variety of different ways. One of the ways is visually and one of the other ways is interactively. A game like Scribblenauts happens to combine both approaches.

I was initially surprised at the level of reaction from the video game industry in regards to Scribblenauts. I wasn’t surprised that I was interested — I like puzzles and I like sleeper hits, so a game like Scribblenauts was already for me. But the fact that so many stepped up and put their vocabulary to the test against the game at E3 is quite surprising, considering that games like Modern Warfare 2 were prominently on display at the same convention.

People found something appealing in the simple joy of putting words in the dictionary to see if they could “stump” Scribblenauts. 5th Cell’s inclusion of a dictionary packed with thousands of words only made the challenge more appealing. Without any of the more advanced levels there, this one element of Scribblenauts alone had drawn in crowds at the Los Angeles Convention Center. 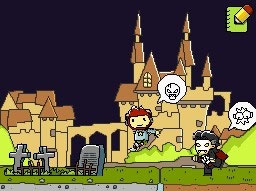 Scribblenauts wasn’t done impressing yet, however, because we hadn’t really seen the bread-and-butter of the game: item and character relationships. God frightens atheists, zombies eat flesh, and you can drop a toaster in water to electrocute a shark.

Scribblenauts has a whole set of rules and relationships for its puzzles, some of which play out hilariously in gameplay. Watching these relationships unfold and using your knowledge of them to earn the “starite” in puzzles will be a critical element of Scribblenauts’ gameplay.

So, maybe a similar game that teachers could customize could teach students about vocabulary and word relationships. I know that for as much as I’m grateful to my grammar books and English teachers for teaching me well, if I could’ve learned about words via the Scribblenauts method, I at least would’ve had more fun.

Part of the reason why I put so much stock in an edutainment-based version of Scribblenauts is because of the power of Scribblenauts to captivate core gamers based on the premise of using the English language to solve puzzles. Scribblenauts fans are everywhere, spreading hype as they go.

It’s not like this is a very common occurrence concerning games that utilize vocabulary. There’s been hype like this for other types of puzzle games — such as Tetris, Professor Layton, and even Myst — but usually not for vocabulary-intensive games like Scribblenauts.

If the highly critical core gamers are interested in Scribblenauts, there’s something gripping in the formula that works. If the formula could be retooled to teach, it could be potent.

If the vocabulary-based brainteasers of Scribblenauts could be retooled
to teach, an edutainment-based version could be something special.

It’s not like video game edutainment is anything new. The video game industry has edutainment consoles in the form of Leap Frog, which has subjects like math and English explored in a gameplay context, using popular kid-friendly franchises in order to gain the interest of young learners.

We’ve also already seen a form of edutainment introduced in the DS’ casual gaming scene with games like Brain Age and My (language name) Coach games. Maybe an edutainment-friendly version of Scribblenauts could further the crossover. The market for these games might not be enormous, but it is growing and it could potentially be only a matter of a time before there’s a crossover hit — or, at the very least, an edutainment puzzle game with as devout a following as Tetris.

On the other hand, maybe an edutainment-based Scribblenauts wouldn’t work. Maybe Maxwell’s styles of adventures aren’t fit for teaching kids English and vocabulary. But something like it should still be tried.

Capitalizing on the popularity of a game like Scribblenauts on a platform as widespread as the DS and creating an edutainment version could help the industry get on the road to defeating said criticism. After all, if any game has the potential to educate in any way, the industry shouldn’t leave that potential scribbled between the lines.