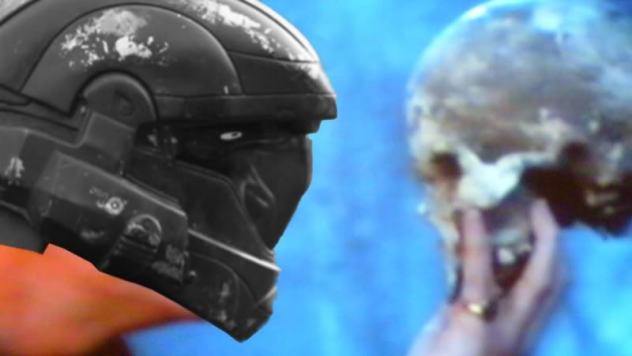 When I think of great science fiction, the Halo universe is far the top. Apart from interesting paralleling stories of Master Chief and the Arbiter at the beginning of Halo 2, the majority of the adventure in Halo felt needlessly long and the characters were 1 dimensional. Given these reservations, I was intrigued to hear that Bungie’s next game, Halo 3:ODST, would change the focus from the super-soldier Master Chief to the regular Orbital Drop Shock Trooper. Being the frontlines of the ‘clean up’ missions in the Halo universe, the ODST are overall weaker and less of a threat to the covenant enemies. I’m a fan of being a regular human (CODWaW, Farcry 2, District 9), stuck in extraordinary circumstances, so this game’s premise was shaping up well. You are ‘The Rookie’, an ODST, lost at night in the city New Mumbasa, waking 6 hours after crash landing. Your job is to follow ‘beacons’ where you find pieces your squad mate’s arsenal. These discoveries leads to the player taking control of every other squad mate, at different times within a 6 hour span. The stories cross paths, and it is all wrapped up in the end.

While the gameplay constantly reminded me the innovation that the Halo legacy has brought to video games, the story reminded me why I don’t take it’s fiction very seriously. It’s just poorly executed.

A director’s job is to translate literature, to film; the written to the visual. With interactive media, this job is arguably more important. In a video game the aspects you want to highlight as a director need to be compelling enough for the player to explore. Halo 3 ODST’s non-linear storytelling is misdirected, which is the risk one takes when straying away from linearity. The events, the people and the environment appear randomly, with no context, and the player’s job is to go from A to B, fighting one arena of enemies after another. The characters are homogeneous and the consequences are meaningless. But under all of it’s redundancy there is, what I suspect, a spectacular storyboard.

The flashback structure, and the day/night contrasting are ripe for an non-traditional take on a normally banal Halo narrative, but the mistake the designers make is assuming all of the conceptual greatness will automatically present itself to the player. This is a fundamental flaw behind poor direction. Carefully constructed set pieces in the game are ultimately forgettable due to the complete lack of value given to the events. All of these events blur into one phrase: “We’ve gotta go here and blow this up!” An interesting purpose for the squad mates would have made the mystery solving elements all the more interesting.

A good example of direction is Batman: Arkham Asylum. While it is a matter of technical merit to design a beautifully crafted environment, effective direction by the designers gave you motivation to critically think about what has transpired in that space. I think what may have happened with ODST is that the designers took the world for granted. With three games out, it is easy to ignore the naive curiosity players feel when entering a new world. So much technically impressive work wasted by a lack of narrative context.

Overall, while being a technically solid game, Halo 3: ODST’s story-telling is a perfect example of poor direction. The story is presented well, with an interesting take on a familiar universe, but progresses clumsily. It’s a classic case of a tale being lost in translation, wherein the designers just forgot to put themselves in the player’s shoes.