The other day I posted a relatively mild comment on Kotaku.com about the PSP. The first comment I got back was someone calling me a 'noob.' Now, I might not be huge on what is cool in the nerd vernacular right now, but isn't the word 'noob' meant as a pejorative for people who play games like they are new to gaming? Is the word 'noob' really becoming an all-purpose slang word meant to put somebody down?

I mean, it is definitely a better word for the legion of Xbox Live putzes to use than 'fag' or 'homo' … but it also seems like a very bizarre word to get such a negative connotation from the Cro-Magnon hoard of drool-covered, Cheeto-encrusted dipshits that populate the gaming universe. 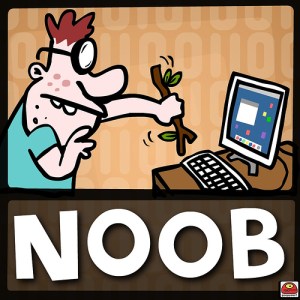 Shouldn't we, as gamers, want to welcome new players into the gaming fold?

Now, I do understand that having someone who isn't great at a game online who refuses to play with people of their own skill level can be an annoyance… but aren't most games making it so that you end up playing with someone ranked similar to your own skill level?

Why do you think 'noob' is getting to be such a prominent word used to bash someone in the gaming world?

Do you use and like the word 'noob,' and think I am an asshole for even bringing the subject up?

If you have any thoughts on this, please post some comments here.