Editor’s note: In this installment of GVG, Andrew points out the game elements incorporated into Dora the Explorer (the TV show), and considers how future game technology could evolve the way we teach our children. -Demian 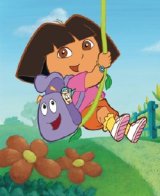 Few properties are as successful as Dora. The show, a central component of the sprawling Dora the Explorer franchise, teaches children problem solving, language (particularly little bits of Spanish), identification, and ethics, via song, narration, and repetition.

One interesting mechanism Dora uses is the pause. A television character speaking to the audience and pausing, anticipating a response, is nothing new. In fact, you will find plenty of examples on Nick Jr. This technique ranges from simple identification to open-ended questions, where any answer is right (“What do you like?” [Pause] “I like that too!”). This is a sort of passive interactivity, with no real consequence to participating. The show will go on.

However, Dora also includes interactive parts, and encourages children to point at objects on the screen. While watching the show, I was surprised to see an actual cursor appear on the screen and click on the item in question.

Dora the Explorer is basically a television show of a computer game, one that employs both conventional (cursor clicks) and unconventional (voice commands) game elements. Kids “control” Dora by offering advice to run or jump. Dora encounters power ups in the form of stars as well as obstacles and enemies (notably Swiper the Fox). The show even has levels and a mini-game incorporated into the closing credits.

Again, the show elicits interaction through the means most easily accomplished by children: voice and pointing. Sound like any other upcoming game input device you’ve heard of?

The Revolution Will Be Televised

The Wii introduced motion controls to the mass-market video game audience, while simultaneously expanding that mass market. The Wii is not the focus of this discussion, but what it inspired is. 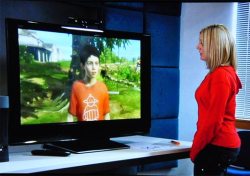 Project Natal does what Nintendon’t, or so Microsoft would have us believe. Which is fine, new technology trumps old technology…although in classic Microsoft fashion, they are planning for Project Natal to do everything. If the frustrations I have on a day-to-day basis with Microsoft products are any indication, the video game control mechanism will be less than the sum of its parts. However, the ideas behind Project Natal are grand enough that if Microsoft doesn’t nail it, someone else will.

As seen in the infamous Milo demo video from E3 2009, Project Natal will be exactly what Dora the Explorer apes: a fully interactive video game. Gamers may obsess over how Natal will affect first-person shooters, but the real beneficiaries of this technology could be children. A clever-enough developer (tuned into child developmental psychology) could use basic video game techniques to provide an incredibly powerful learning tool, if the success of Dora is any indication.

At that point, Dora won’t be a television show or a video game, but a little bit of both.

The problem is, I kind of don’t want this to happen. I can see it selling millions, but to my mind, allowing a computer to teach your child to count is kind of like teaching them to walk by tethering them to a treadmill. I would much rather boast that I taught my child to count to ten than to say, “My child knows how to count because I gave her counting instruction software.” It just doesn’t have that ring to it. Not that I’d necessarily do a better job of teaching her than some device, but we would lose a little of that parent-and-child bond. As a new father, that is an experience I want to have. Call it selfish, I guess. 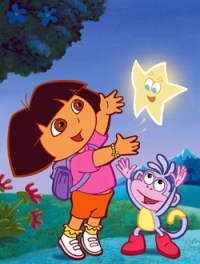 That isn’t to say such a device won’t enter my home. It very well may, provided it’s done correctly. This is where my limber-thumbed generation can succeed — we can play video games with our children, and the new wave of educational games should take advantage of that. I’d rather games be a tool to connect parents and children. Unfortunately, the millions of people that use televisions as babysitters make me pessimistic as all get out.

Truth be told, Dora is for children older than my daughter, and I won’t encourage her to watch it in the future. Why? Because I can’t watch it, I won’t be able to enjoy it with her. But we can watch another program together, called Yo Gabba Gabba. And I’ll explore how it uses video game culture in Generation Video Game #5.