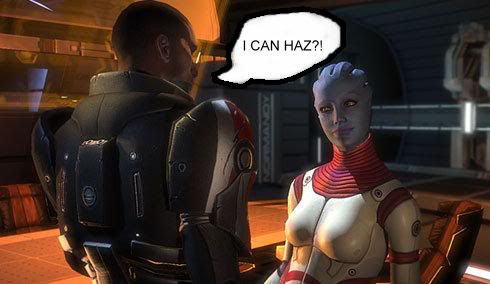 Video games look like movies, but unfortunately the similarities stop there. While skilfully crafted movies, which speak to aspects of the human experience, are critically acclaimed and usually popular, maturely handled video games are extremely few and far between. One of the most interesting aspects of humanity that video games are starting to explore is sexuality. On the whole, the medium is still crass and immature on the topic of sexuality, but as with any art form, the growing pangs are worth it.

The buttoned up, reactionary media has had their field day on the subject (FOX “news” “report” on Mass Effect), and frankly, blew it. Misinformation about Mass Effect’s relatively tame sex scene, in which they accuse it of being fully interactive, hardcore pornography, is indicative of the puritanical haste-ful conservative society we endure today. In an age where the accused scene is literally keystrokes away, misinformation due to laziness is unacceptable in news media. Overall the situation on FOX was ideological step back in an honest discussion about sexuality in interactive media.

While that incident is old news, the still liminal state of the medium fosters questions about what is appropriate and what is unacceptable for video games.

My opinion: Use your head.
The perversion of sexuality into a corrupting bogeyman is a huge pet peeve of mine about the times we live in today. Why is violence, the most destructive of all the forces humans can commit, given the benefit of the doubt? There is a clear reason why children should not see sexuality, considering they are most ignorant to what are the wrong and right actions on the subject, but isn’t that then parent’s responsibility to, I dunno, PARENT?

The clear counter argument to that would be: Well considering that pornographic material is so easily accessible on the internet, it is impossible to watch what gets into your child’s hand.

But is that really an argument for completely stopping every other media in existence from being creative, and possibly exploring sexuality? Absolutely not. Based on my upbringing I can say that being taught what is right, wrong, fake and real in general are more than enough tools to handle explicitly wrong videos or images I see.
Then what is the solution?

It’s being honest with each other.

What is it that keeps the general public so afraid about the sexual world?

It’s the culmination of generations of ignorance. If we really want to be honest with each other on the topic of sexuality, everybody, I think, needs to be exposed to the spectrum of the human experience, when they are old enough to process it. Only then can the line between reality and fiction be filled in and appreciated for what it is; the starting point of the infinite creativity of the human mind.

I’m sure as the industry matures, the way sexuality is implemented into games will become more tasteful and come to the point where movies have provided a satisfactory simulacrum of life, but until then, everyone needs to just use their heads. Regarding the video game industry, in terms of overall girth and longevity, it’s big and will last a long time*. It just has a lot of maturing to do.

I guess the problem is: Don’t we all.

*That’s what she said.