Well at about level 28 or so in Modern Warfare 2's multiplayer I have made my decision. I'll keep playing it off and on because I enjoy shooting things and leveling up but I'm waiting for a better game to replace it. Once I find the next game that does this sort of thing well and has what I want out of a game I'll leave it and never look back.

My multiplayer gaming habits aren't conducive to playing with other people. I mostly jump on and off of a multiplayer game whenever I feel like it and whenever I have time in between playing good single player games and working an erratic schedule. I have friends who play games but none of them play this, and all my online friends who play this are never looking for more people when I'm available. This is just the way my life has always worked. So when I'm evaluating a mutliplayer game I'm always doing it from the loner perspective, and some games are better then others at creating a satisfying experience for a loner. Some multiplayer games provide avenues for you to meet new people and interact with them in a fun environment. Some multiplayer games paint a story with every match that keeps you coming back to prove to your faceless peers why you play the way you do and how awesome it is that you do. This game does none of this.

Why, do I say that you ask? (You don't even have to ask that. I'm making sure you do because i have the power of the writer! BWAHAHAHA!!!)  The multiplayer game lacks personality. It SEVERELY lacks personality. They go out of their way to make your character, no matter what you do with him, just another grunt to everyone else. The only way you can make someone remember who you are is to be a knife maniac or that double shotgun douche on the opposing team no one likes.

You are only memorable if you are exploiting the game enough to be hated. The complete lack of visual identity for your character completely undermines for me the concept of progression.

What the fuck do I care if a series of randomly selected avatars that I control have better guns? It's not a visual representation of something that I inherently own. When I'm shooting someone I want them to know who shot them so that when it happens again and again they can realize how much I'm out playing them. It also helps me get into the game to know who my enemy is. That guy with the beret who snipes me all the time is going DOWN!

The lack of ownership of your avatar in a match makes me not want to take the game in any way seriously. I pop in for 2 or three matches in ground war, then pop out with the satisfaction of a decent kill fest. I don't keep playing, I don't look for like minded people to play with. I just don't give a shit. Everything is happening so fast and everyone is so nondescript that I don't consider any moment of any match memorable. Considering that I don't have this same problem with TF2 and that up until recently had no customization at all gives you an idea of what this means. The characters in modern warfare 2 are so boring that I would rather be a random pyro or a random medic then them. I would, in some ways, rather experience no progression but have a visual identity then experience such a rich progression as a nobody.

At least in team fortress 2 things are happening slowly enough that I can show off. In TF2 i'm not just a pyro on my team i'm THE pyro on my team. I'm up in the enemies face, throwing them around with the air blast, lighting them on fire constantly and making their lives a living hell. My defeat of the enemy is a complex ballet that makes them dispise every ounce of my being. 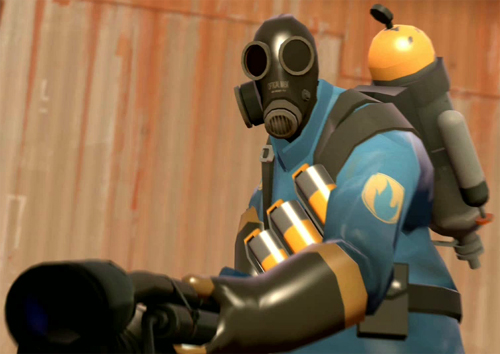 In Modern Warfare 2 it's just some faceless dude shooting some other dude. One dies, the other lives to kill again. Whoop dee doo.

This is a problem that extends even further then me being angry at the game for not having female character options (which I am. I'm always angry at any multiplayer game that fails on that front). They have officially turned the entirety of the players of their game into faceless boring nothings that you have to look at the name above the avatar to tell apart. None of them can look different from each other, few of them can be visually seen as playing different from each other. It's a huge, boring, grey mass. Apparently this is so they can randomly say 'you are playing as a Russian' or 'you are playing as a task force operative' to try and fool people into thinking this pointless fragfest actually has some sort of narrative in a modern day war setting. Here's a clue guys: It doesn't have a narrative: because you won't let us be characters in it!