Welcome to another edition of For What it’s Worth, where bargain titles are examined to see if they are really worth your bottom dollar. As I said in my last post, the entire month of February will be dedicated to the cheapest of the cheap, games that are affordable as they come. This month will be dedicated to games that 100 per cent (Canadian Press style FTW) free… or at least close to it.

Tonight, we start things off with a rather interesting internet flash game that combines a surprisingly funny parody of Super Mario Bros. and propaganda. Let’s take a look at PETA’s New Super Chick Sisters. 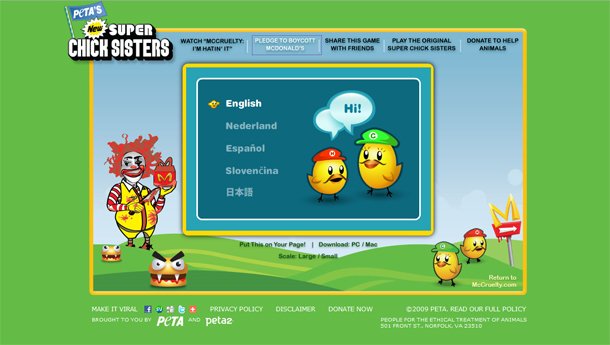 I could give you a bit of a back story regarding the first Super Chick Sisters and how it was used as an attack ad against KFC but I just don’t want to.

Sigh. Since you’re probably curious, here it is in a nutshell. PETA was angry about KFC’s method of killing chickens, so as part of their crusade against the corneal, they created a barley playable flash game where you basically played a Mario knock off with Chickens replacing Mario and Luigi, Corneal Sanders replacing Bowser and Pam Anderson (no really) replacing Princess Peach. Sanders kidnaps Anderson to prevent her from speaking out against KFC and it is up to the Super Chick Sisters to save her from being killed by the corneal (taking shots at a dead man who can’t defend himself. Classy move PETA). The gameplay was absolutely atrocious, taking the classic Mario gameplay and crippling it with stiff controls and don’t even get me started about the lag issues. Not to mention of all of the graphic detail about the slaughtering methods in a game the organization targeted towards children. Again classy move PETA. There was also the issue of the story completely mocking Mario. I actually wouldn’t have a problem with this if it wasn’t so uninspired and unfunny. Making him an incompetent, Yoshi abusing, womanizing idiot might have been somewhat funny if the people who wrote the game had any shred of talent. Is it worth your time? Nope.

So, you might be wondering if I hated the first game so much then why did I decided to give this one a shot? Well for one, I am a firm believer in not passing judgment on a game until it has been played and number two, I had read some reviews before I played it and they were actually fairly positive, which peeked my interest.

Was I right to give PETA’s flash parody another chance or should the chick sisters be destined for the bucket?

Story: The evil Ronald McDonald has kidnapped Princess Pam (Anderson…  I tell you again, really) as she was prepared to open her first Double Delicious (Cause I’m a classy guy, I’ll avoid the obvious joke here) veggie burger restaurant, because she would make a great toy for his Unhappy Meals (Oh come on). So now it is up to the Super Chick Sisters to save her, however they do have competition. The Mario Bros (copyright laws be damned) hop into their mustache ride (it is really hard not to make a snide remark right now) upon hearing the news with the hopes of saving her first. Of course the Chick Sisters beat them at every turn and we hear the occasional bits of PETA propaganda about the evils of McDonalds’ slaughtering policies and how racing Yoshi’s is bad. There are also some clever jokes about the Mario franchise and the seemingly never ending slew of games with the Mario name on them. Bowser also joins in on the action as he has grown fond of Princess Pam after spending his nights watching Barbwire on Netflix (masturbation joke must be avoided). I’m glad the folks at PETA aren’t in charge of the ESRB or Joe Lieberman would have even more to cry about.

Graphics & Design: Not bad for a  free flash game. The game looks incredibly cutesy and cartoonish which is pretty suitable for the kid friendly vibe PETA was going for here. Although I wouldn’t really call it child friendly considering everything mentioned in the story section as well as the fact that there is blood scattered across some of the levels. The quality of the character designs ranges. The main cast are drawn pretty well and actually mirror the light hearted and goofy style of the Paper Mario series and that includes Ronald McDonald and Hamburglar in all of their Satanic looking glory. But I will say that most of the enemies and background characters do look rather lame in comparison.

Sound: The sound is pretty standard. The music and sound effects are pretty taken straight out of the Mario games, although they aren’t quite up to par, well it is kind of mediocre now that I think about it.

Gameplay: The gameplay flaws of the first game are gone for the most part. The smooth gameplay is actually quite surprising considering the lag issues the last time around. This plays exactly like New Super Mario Bros. meaning you play through the Mario inspired levels to reach a castle at the end. You even get to pull the McDonald’s flag down at the end of each level and replace it with a PETA one, much like the Koopa and Mushroom Kingdom flags. Much like the first Chick Sisters, coins are replaced with chicks, goombas have been replaced with bloody hamburgers and the mushrooms have been replaced with a box (?). The move set is also exactly the same as in  New Super Mario. You have the basic jump move from the classic games, as well as the but stomp and wall jump moves that were first introduced in Mario 64 and they actually work quite well, although they can be a tad slow at times do to minor lag issues. You even get a power up this time around. In one of the levels you can get the sea kitten suit which gives you the ability to swim and shoot hair balls, which is actually kind of cool. There is also a pretty fun Mario Galaxy level which allows you play with gravity, much like Gravity Man’s level in Mega Man 5, although it is short lived. You’ll also come across PETA protesters, children, chickens, mice and friendly veggie burgers who will give you hints and some more information about McDonald’s mistreat of chickens. We get it PETA. McDonalds=Bad. You=Good.

Extra Features: Well there are two versions of the game. A mature version and a kid friendly version. Both versions still have the same sexual innuendo, blood and graphic details of McDonald’s slaughtering methods. The only difference is the kid friendly version doesn’t include the live video of chickens being killed that plays mid-way through the game. Either version isn’t really appropriate for younger players. I don’t why PETA insists on traumatizing children. Oh and after beating the game you can play as Pam Anderson. Yeah…

Replay Value: Pretty much none. Sure the game is entertaining enough for an initial play through but you are not very likely to want to play it again anytime soon.

Is it Worth your time? Yes. Is it the best flash game on the internet? Not by any stretch of the imagination, but I will say simply that it is absolutely hilarious for what PETA would likely consider to be all the wrong reasons. So if you need to kill 30 minutes and want a good laugh, then I would recommend giving it a try. You can find it on PETA’s official site and if you get hungry, I recommend going to your local McDonalds drive-though and picking up a 6 pack of chicken nuggets.

Until next time happy hunting!