Full disclosure: Activision provided me with roundtrip airfare and three days of hotel accommodations in Liverpool to attend a media event for Blur. They also paid for one of my meals along with the other attendees at the hotel restaurant. I wasn't asked to make an agreement on the amount of coverage I would provide, and I didn't receive any restrictions on what I can or can't say about the game.

One of the reasons why Activision had Blur’s recent press event in Liverpool, England, is because it’s where game’s developer, Bizarre Creations, is located. As part of the event, we went on a tour of the BC studios to get a firsthand look at what goes on behind the scenes.

This was my first proper tour of a game studio, and I found it to be quite interesting. I hope you enjoy this inside look from Bizarre Creations' studios and Blur’s media event.
*For a detailed preview of the game, click here. For a chance to win a Blur beta key, click here. 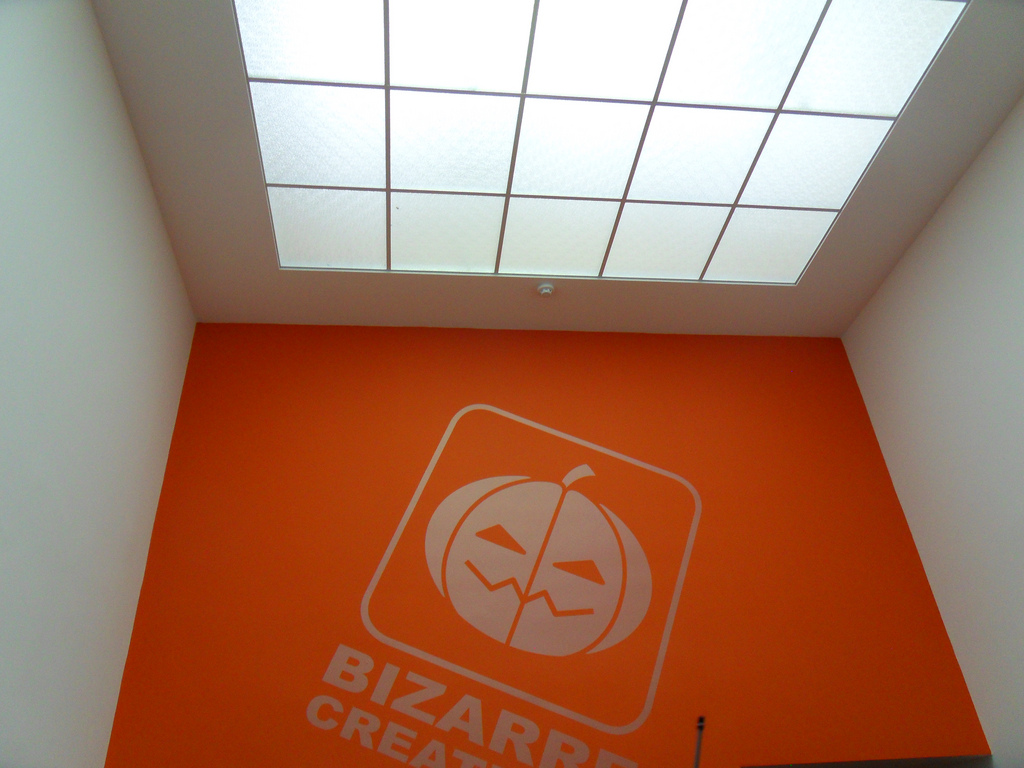 This company logo is painted above a doorway in the main hallway. I'm not sure if the pumpkin is smiling because he's happy or because he's up to something. Probably the latter. I don't trust that guy at all. 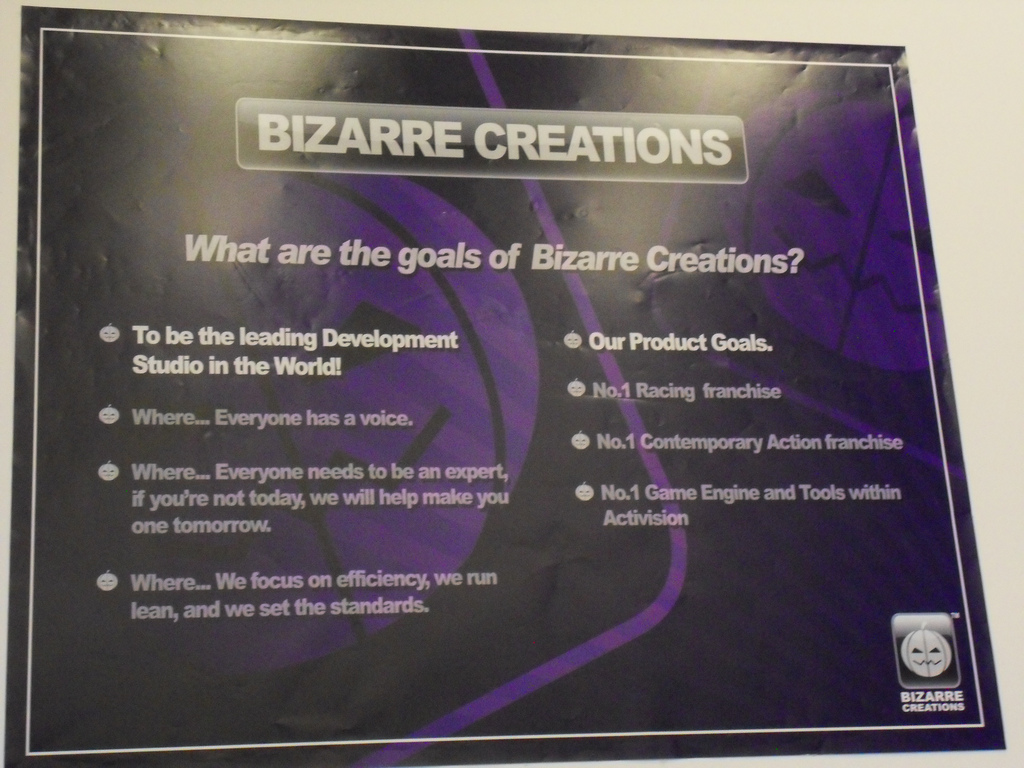 These are the company goals, which are proudly displayed in the lobby. They seem like pretty good goals to me. 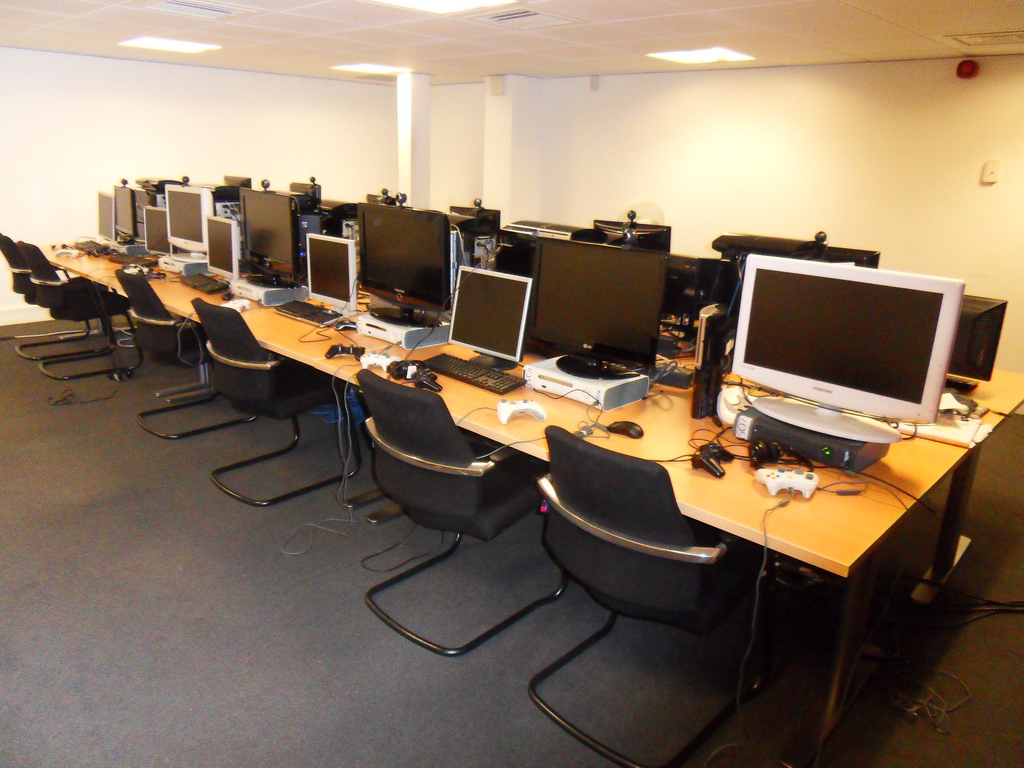 To the right of the main hallway is a room that I presume is used for focus groups and/or testing. I kind of forgot to ask exactly what its purpose was. Cut me some slack, I had only been in England for about 14 hours at this point. I was sleepy! 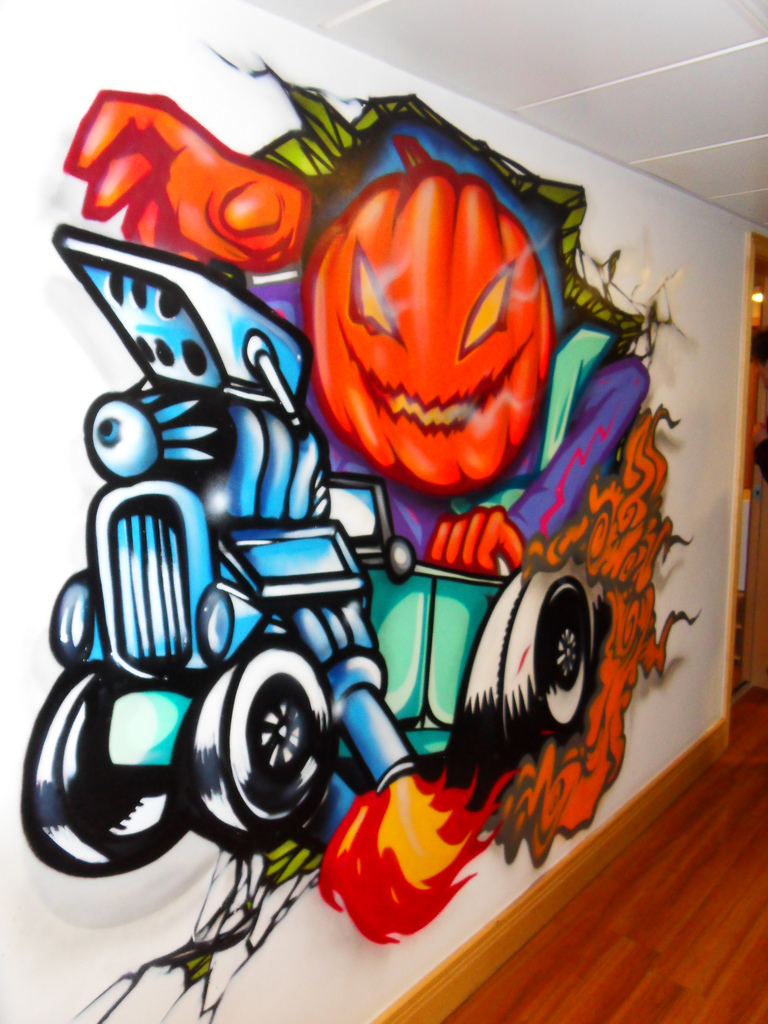 Here’s some of the handiwork from the studio’s resident graffiti artist. That pumpkin still haunts my dreams. 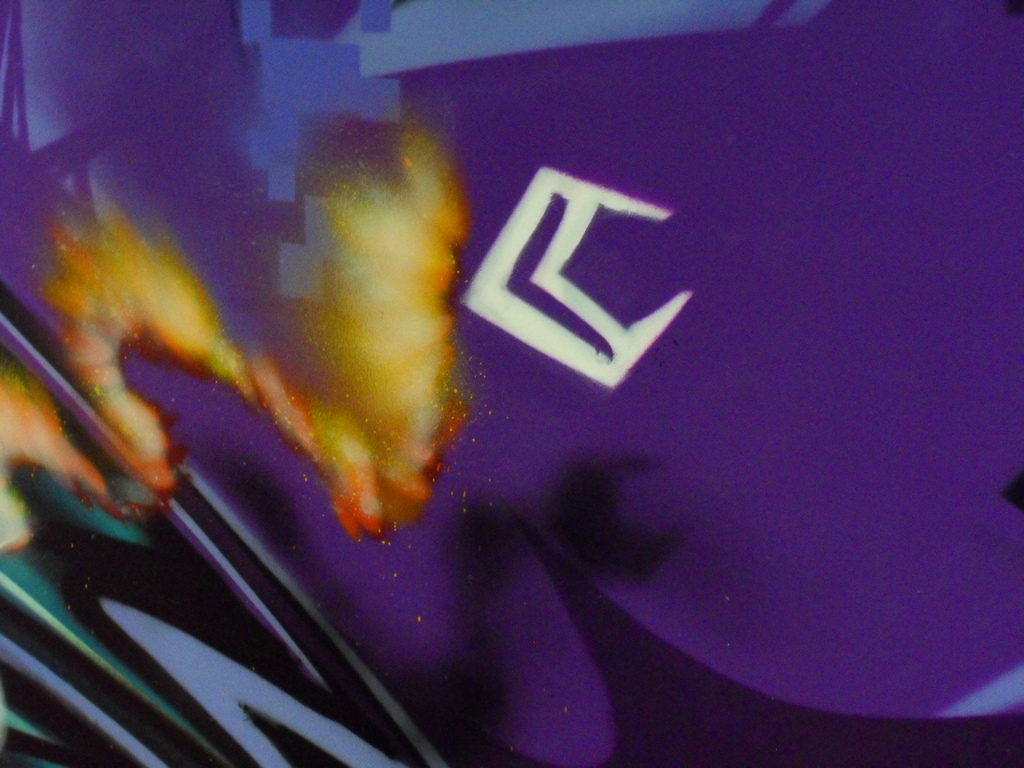 One of the murals contains a little nod to Bizarre’s “other” well-known franchise.

Click on the above video to hear Audio Manager, Nick Wiswell and Lead Audio Designer, Mike DeBelle explain why there's an old car door in the sound studio. 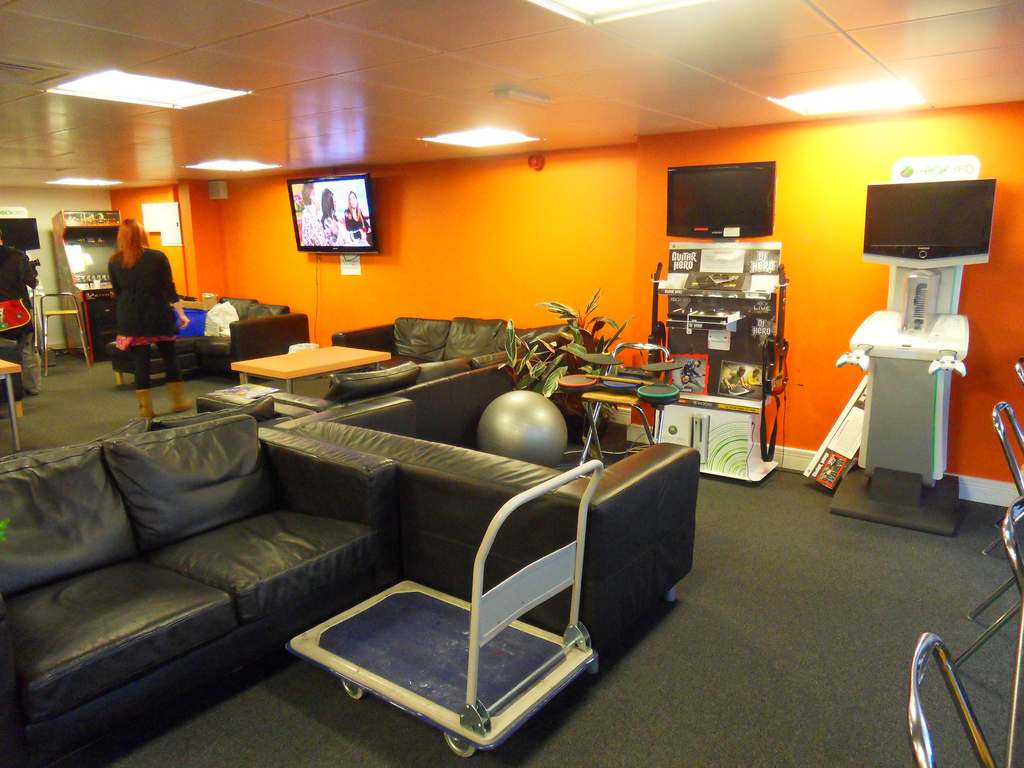 Here’s a look at the staff lounge. There’s a Killer Instinct 2 cabinet in the background, so that’s cool. 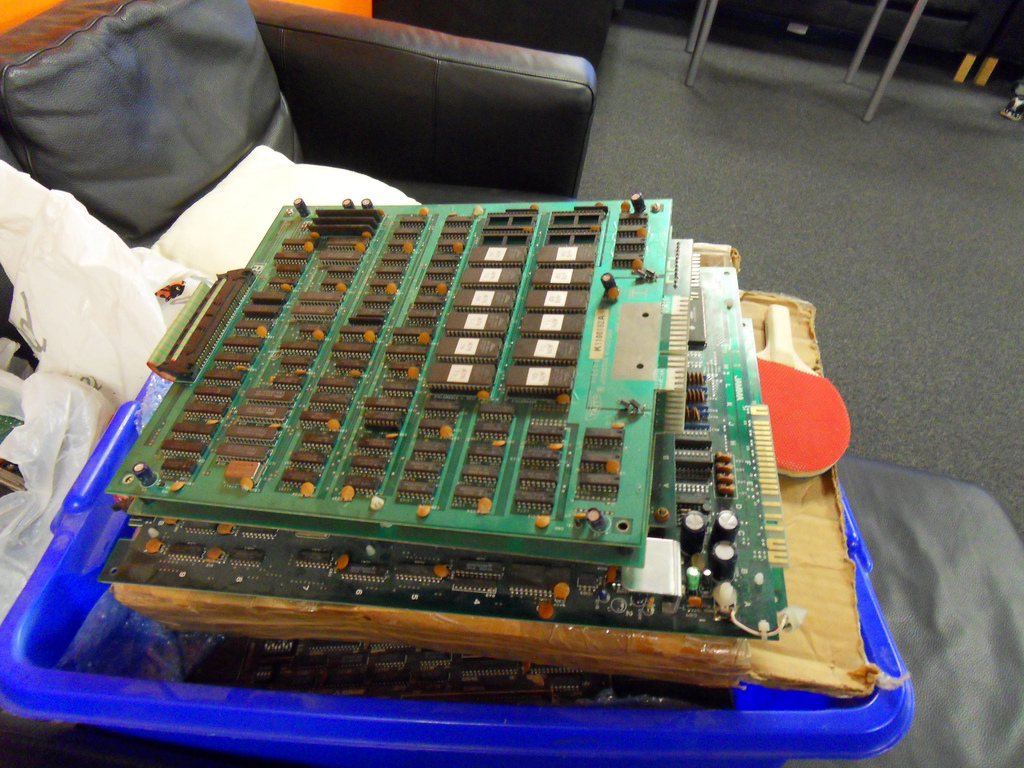 These are random arcade boards that were next to the Killer Instinct machine. I like to imagine that these are secret games that were never released back in the day, but I’m 99.9 percent sure that’s not the case. 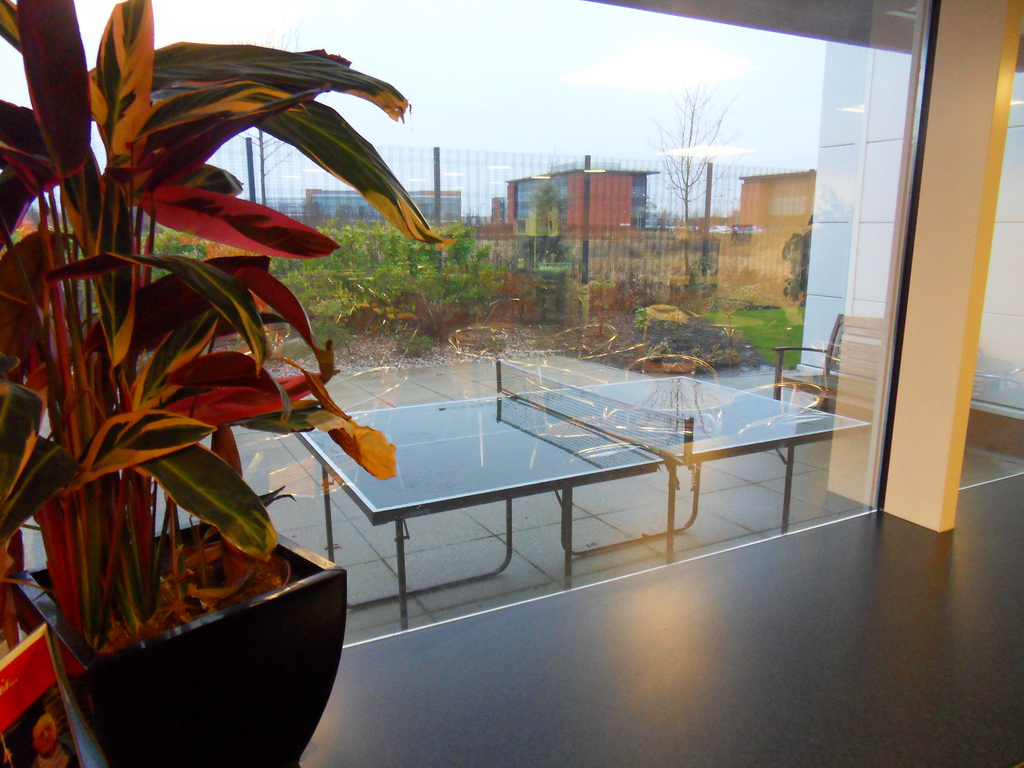 This is officially the saddest ping-pong table in the world. The poor thing has to sit outside and face Liverpool’s dreadful weather day in and day out. We were told competition around the studio is so fierce that staff will play in the rain. Crazy Brits! 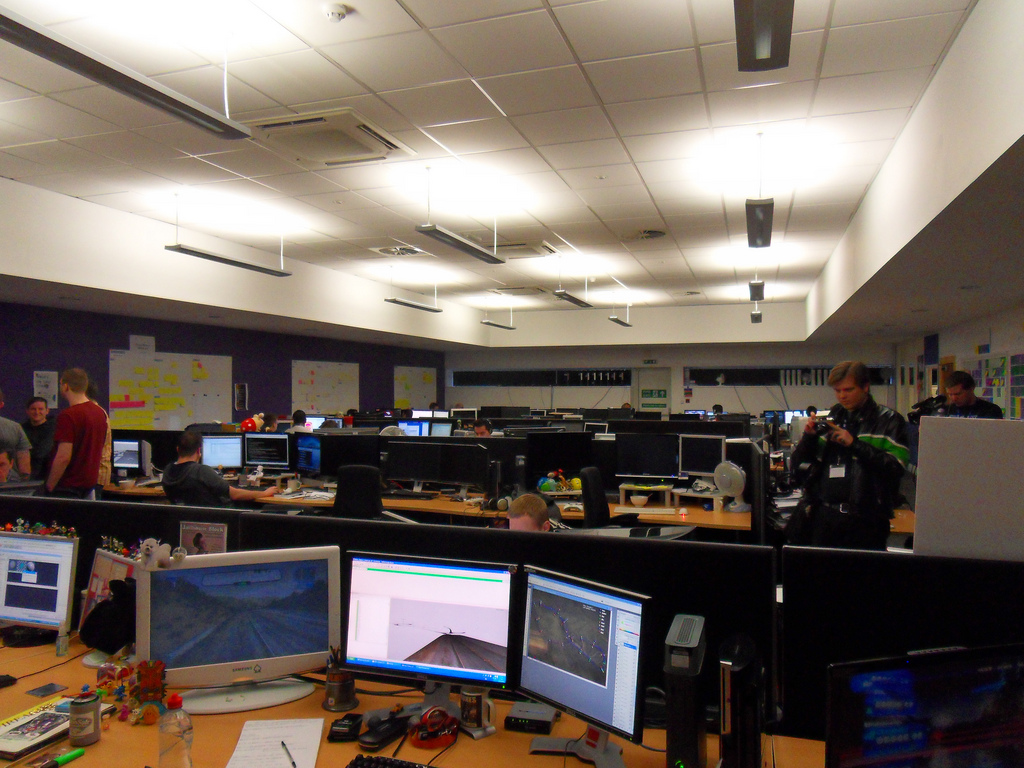 Here’s a look at the main development area. Everyone pretended not to not be annoyed as we snapped pictures of them like they were caged animals in a zoo. That was awfully nice of them.
Head to page two for more pictures and to hear about my crushing split-screen loss to one of the game’s developers. 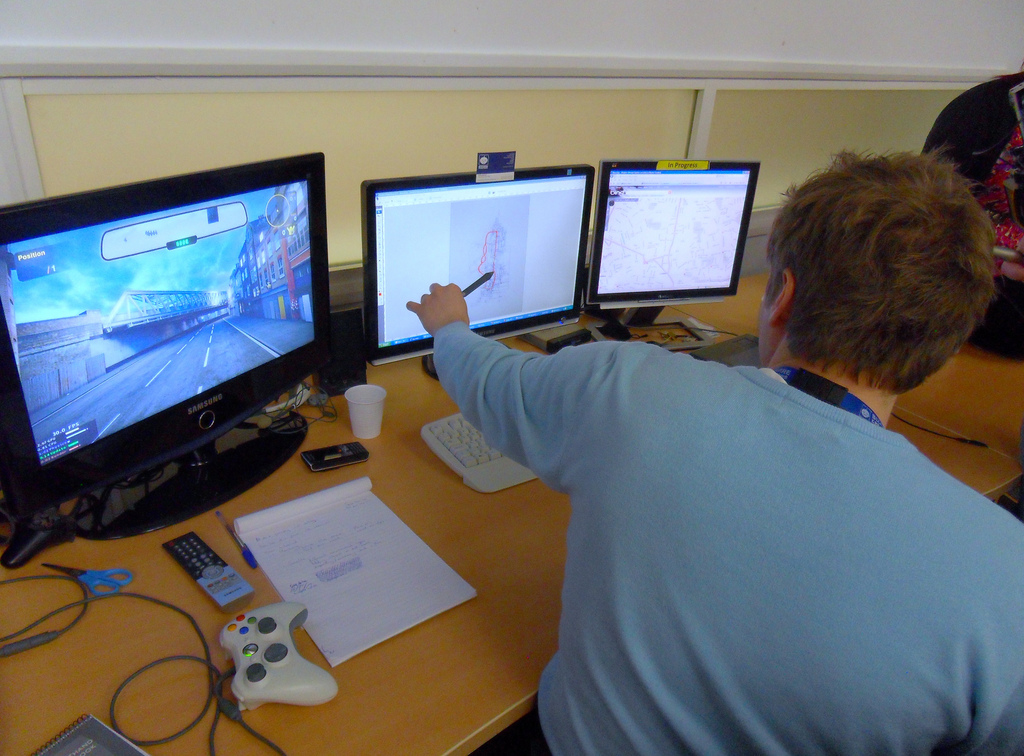 Chris Downey, the game’s Lead Environment Artist explains how they’ve taken real-world locations (far right screen) and tweaked them to be a bit more interesting (middle screen). The in-game result is on the right. 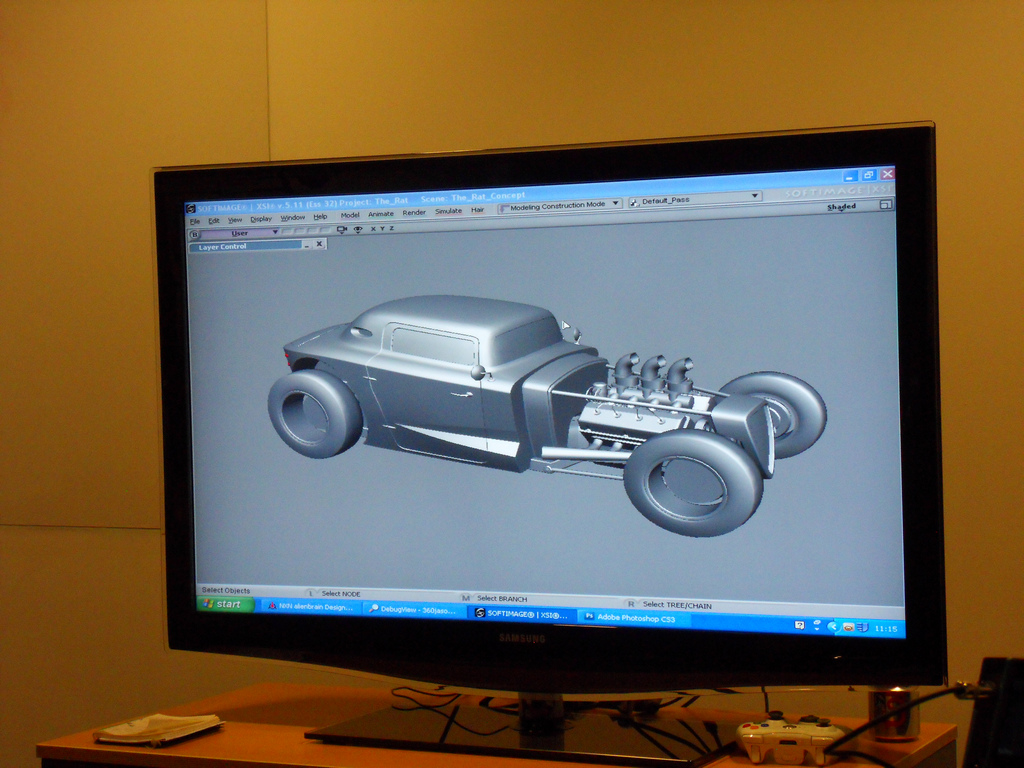 This is what an unfinished car model looks like. 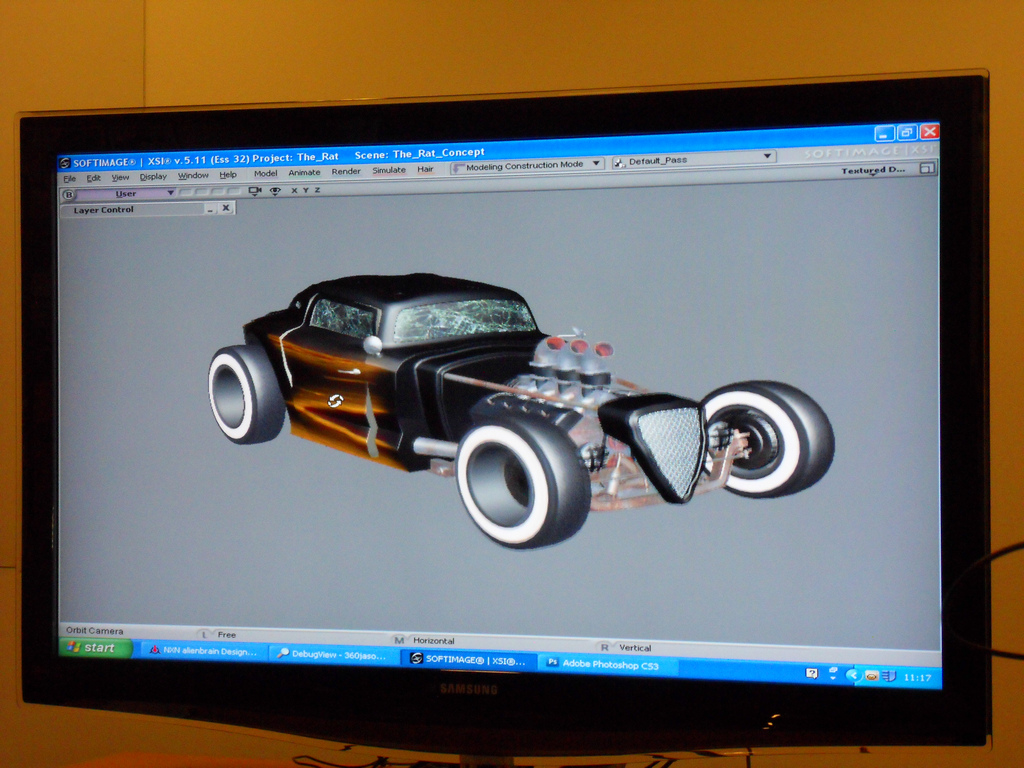 Here’s the same car model as more details and damage are added. 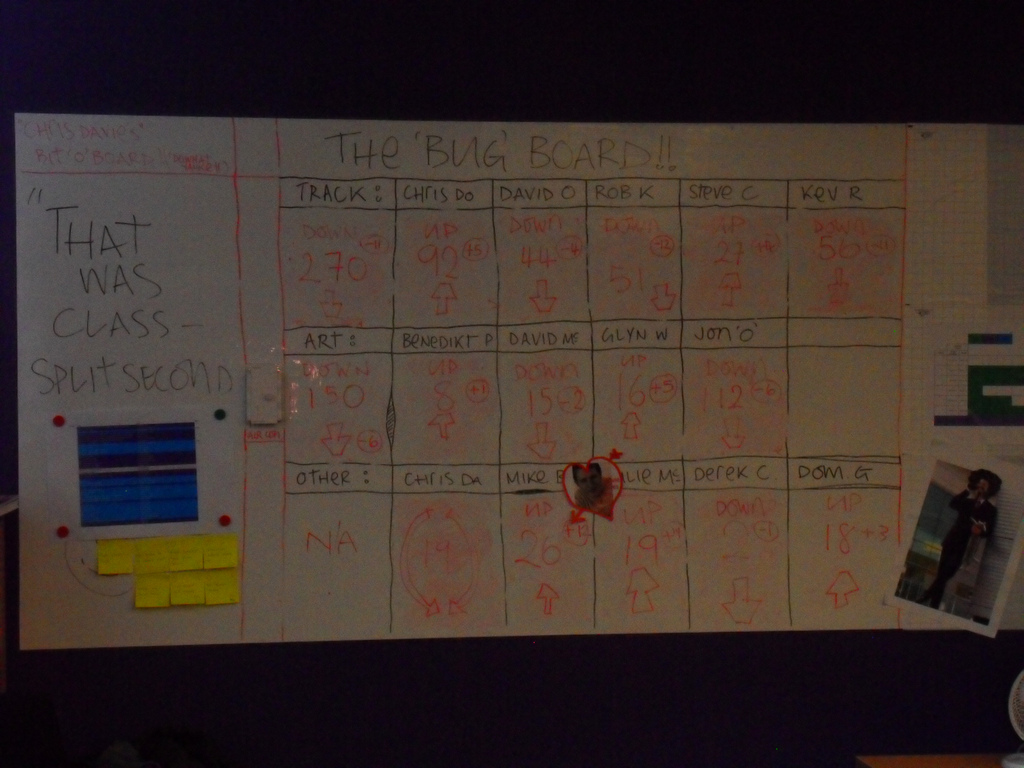 This is the “bug board.” I can’t figure out what the hell’s going on here, but it looks like Chris is in the lead, while Kev R is bringing up the rear. Nice work, Chris! 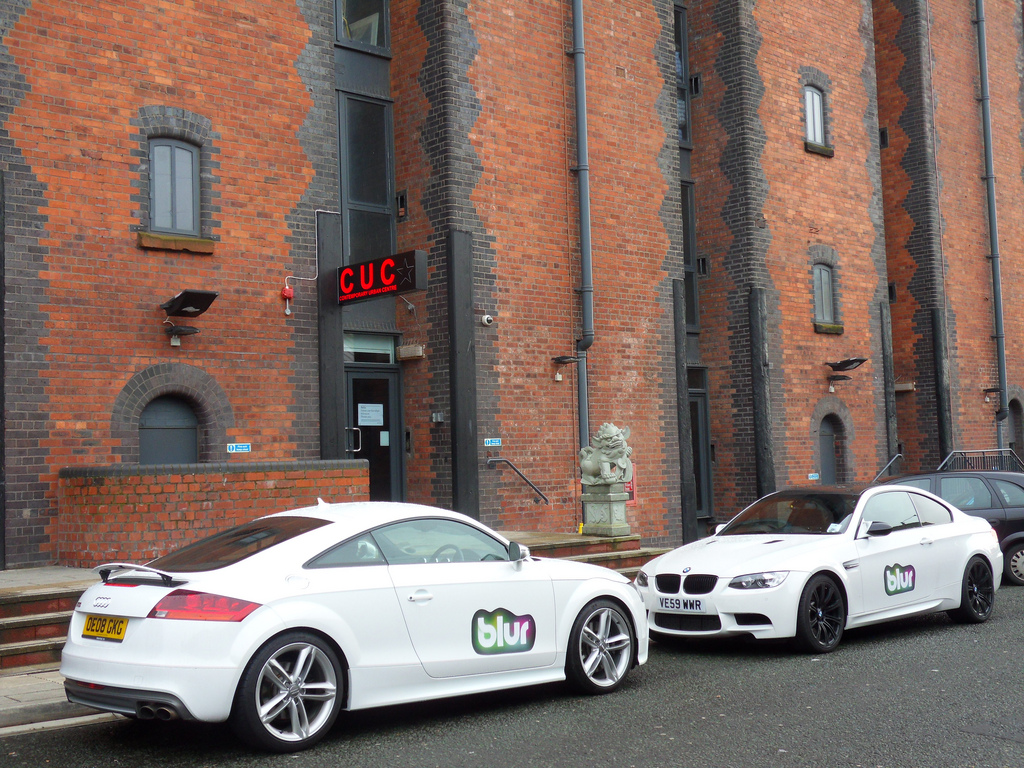 What are the odds that two cars with Blur logos would be parked right outside an event for the game? What a crazy coincidence! 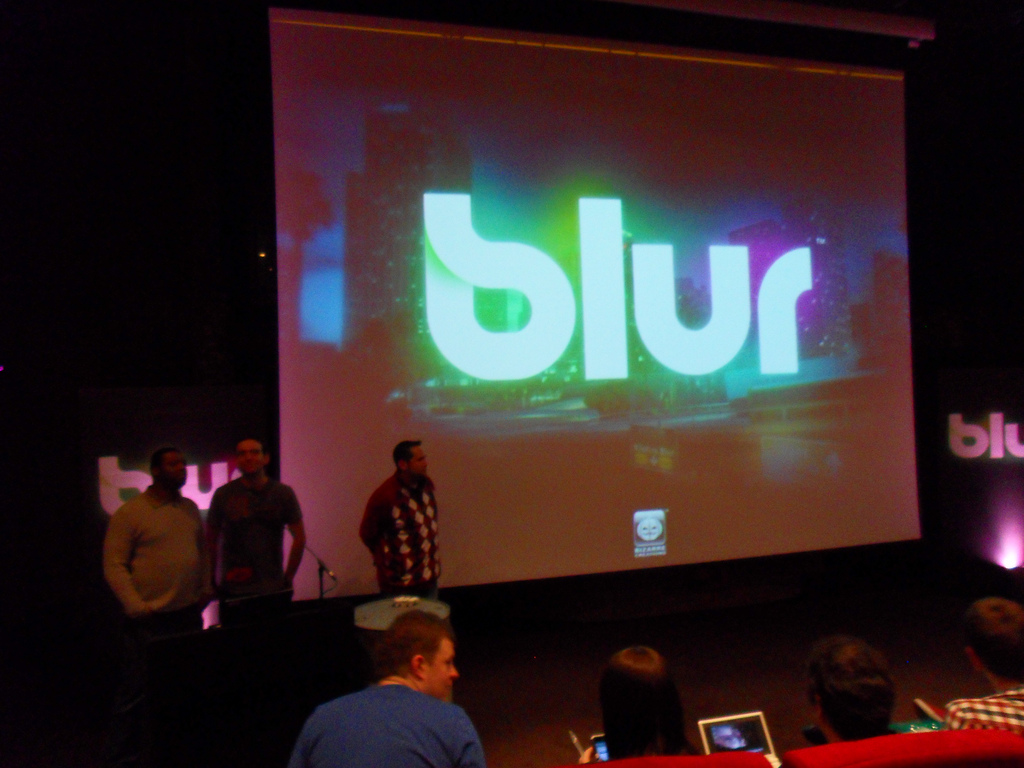 This is the theater in which they presented the game to the press. They explained a bit about the single-player experience, and then gave us an overview on the game’s multiplayer. 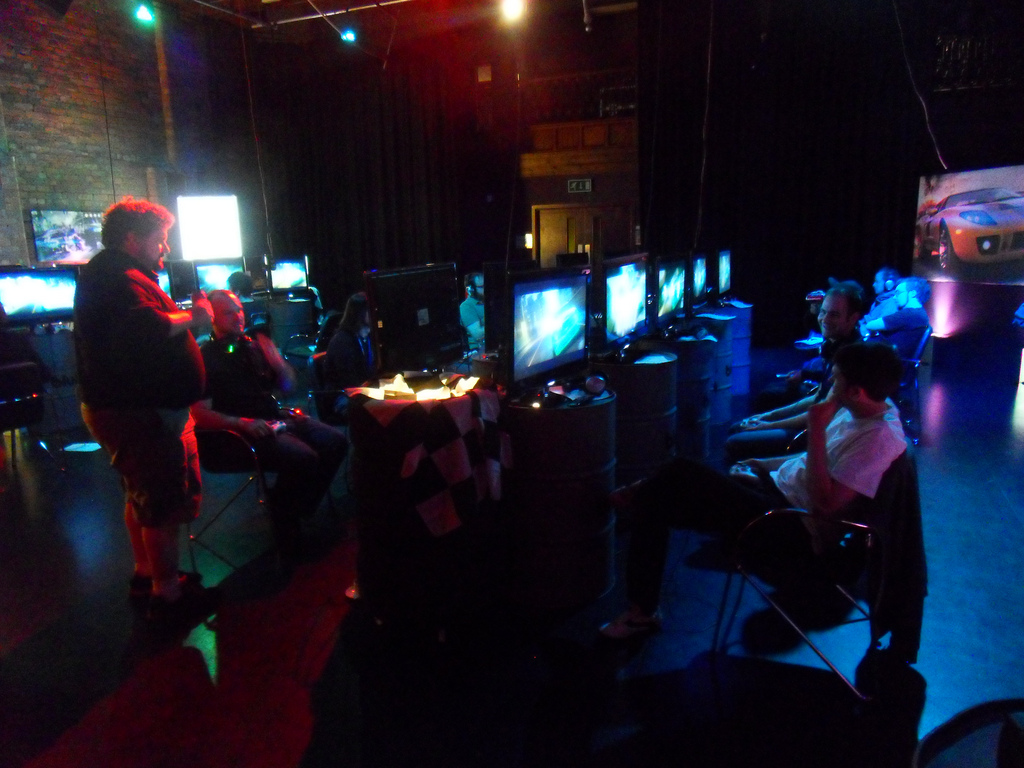 This is the “test track’ where we able to play 20-player online against fellow members of the press as well as some developers. On the left you can see Giant Bomb's Ryan and Vinny brainstorming ways to beat me. 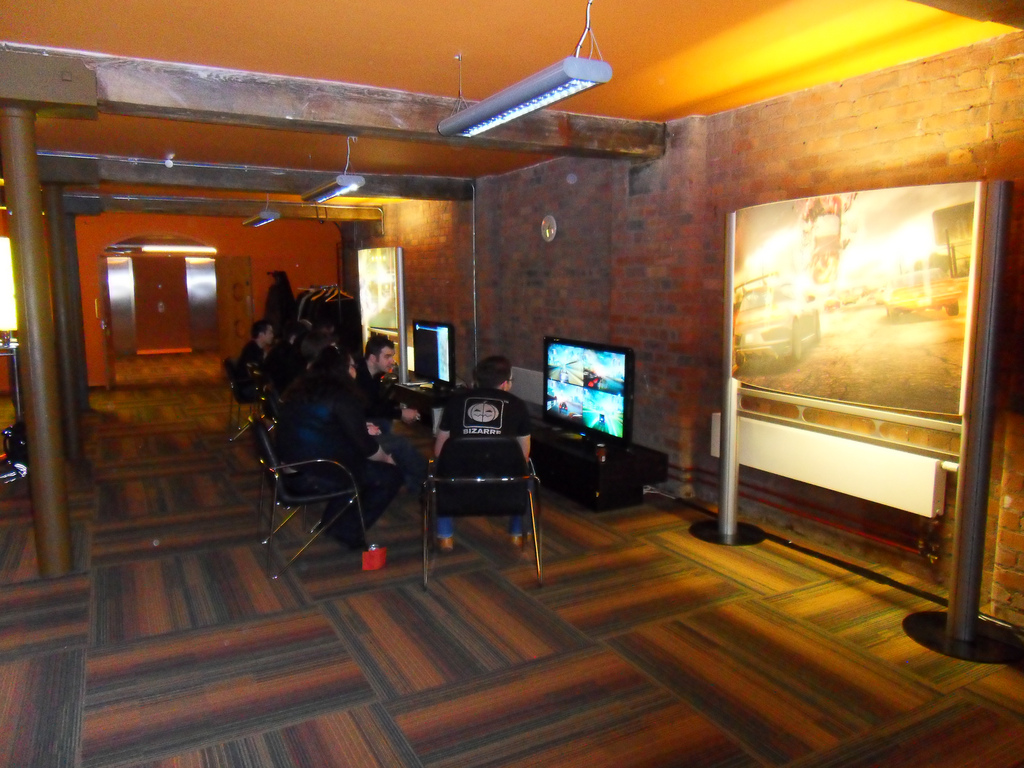 Two televisions were setup so that we could check out the game’s four-player split-screen action. This was quite a bit of fun until I raced against one of the game’s programmers, Steve Bilton. He kicked my ass several times, and it made me very sad.
Listen to Steve’s technical analysis of what happened in our races:
{audio}http://www.bitmob.com/assets/audio/SteveBilton.mp3{/audio} 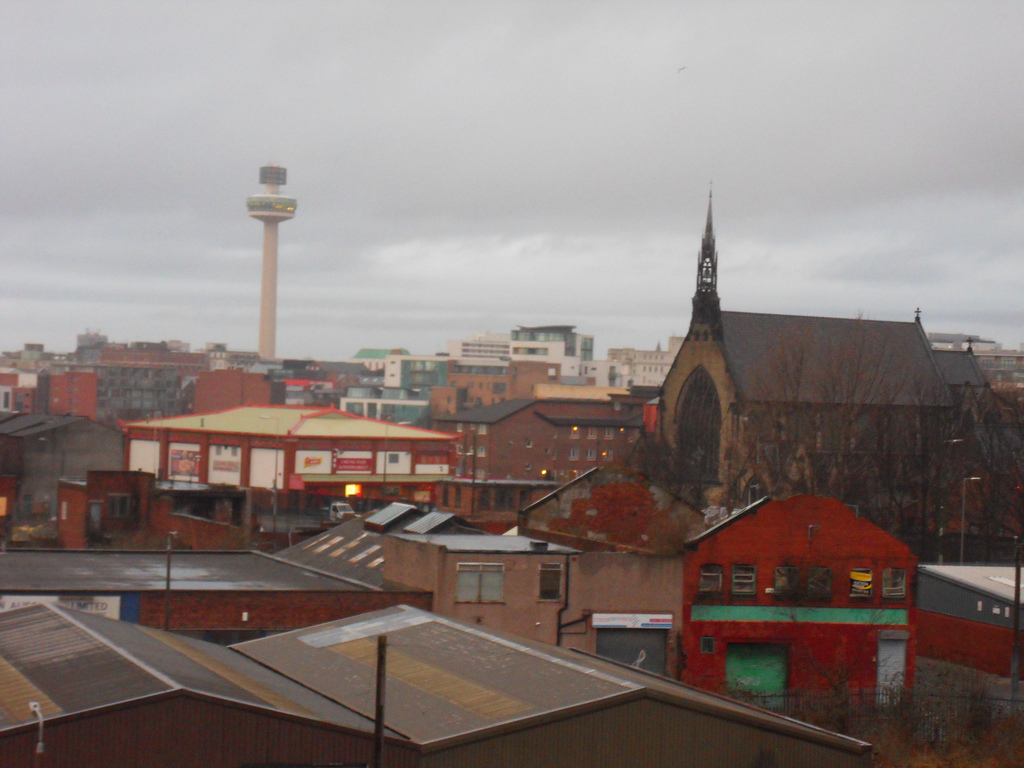 After Steve humiliated me, I went and stared out the window at the bleak Liverpool weather.
The End