You don't have to look far to see hyperbole and effusive praise being thrown at the game Heavy Rain.

"Heavy Rain transcends the current definition of a video game and blazes a beautiful, artistic trail with a psychological thriller that features shades of Hitchcock."—Kombo

"I have never played anything so momentous or revolutionary as Heavy Rain. In the coming years I expect the game's influence to be felt throughout the industry in terms of gameplay, storytelling and interactivity. This is a game that deserves all the plaudits it can get." — Boomtown

While I went into the game a bit pessimistic, I quickly found that I agree with many of these statements… At least partly.

My play-through of Heavy Rain felt a bit like playing two games. One game featured a horrible control scheme that in many ways is actually a throw-back to the old Resident Evil tank controls that everyone complained about so much years ago, yet is apparently a necessary evil for this game if you believe some reviewers. The other game lets you choose actions and dialog options with amazing ease in a way that did not take away at all from watching events unfold. This control style was also not nearly as distracting as the execution of Quantic Dream's previous game, Indigo Prophecy, was when I played it.

One game featured one of the most engaging stories I have ever encountered. The other forced decisions on me that I did not want, and seemed to jump the tracks at the end and play out not just unexpectedly, but absolutely contradictory to some of the choices I had made for characters earlier in the game.

I could go on like this forever, but the simplest way to put it is to say that Heavy Rain is an uneven experience that has many glorious highs and some frustrating lows.

What I loved most about the experience was how the little mundane moments helped humanize characters, while also providing interesting ways to interact with the environment. When the action speeds up — and boy does it speed up at moments — the games becomes amazingly intense.

I don't want to give too many details on story that might spoil the game for you, but I experienced an event in a car that is one of the scariest and most heart-racing segments I have ever played in a game.

This experience is often muddied, however. I experienced a number of bugs– like people walking through each other, animations for background characters getting stuck in an endless loop and I even saw characters walking into walls or each other in illusion breaking spurts. At one point early in the game my son actually ran off the screen, across a road and then disappeared through a wall. The only thing I could do to recover was reboot the game.

Moments where logic is forced upon you that you would not choose yourself if you had designed the game can also make for some annoyance, and there were a few sections where unclear choices forced me onto a path I would not have chosen if I was clear on the choice I was making.

Quantic Dream does a great job of introducing game play ideas, and the motions and button presses required to complete scenes build up nicely until the whole act becomes second nature. I would have loved to have been able to turn off the motion control, but alas, no option like that was given.

The graphics are another grey area. At times they are rich and detailed. Walking into a clock-repair shop and looking around you will see tiny details like reflections of light on glass and particles flying around in the air will make you just want to sit and stare at the screen for a while. You will also see characters with dead-eyes and some textures that needed another pass before the game shipped. Still, this game has some of the best faces I have ever seen in a game, and up close they are more detailed than I would have ever thought a developer could achieve in-game. I would give Quantic Dream a tip, though — If your clothes are going to animate like buckets then I would recommend using slight of hand to put them on characters rather than forcing players to watch them slip a stiff-as-nails shirt over their head.

I do have great news for hornballs, though. Heavy Rain features a fairly large amount of nudity, and there is a sex scene that is one of the longest and steamiest I have ever played in a game… Minus the poorly animated kissing. 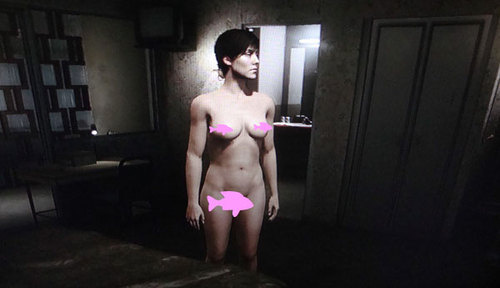 There were a few game-breakingly frustrating moments where my character refused to go the direction I wanted. This is where the weakness of using R2 to move really shines through. I have to wonder why Quantic Dream chose to use two buttons to move, when the left stick is only used for movement as well. The complexity of the controls could have been easily reduced by mapping all movement to this button rather than making players press two buttons just to move. Camera switches can also make for some aggravating moments where your player walks through a door and then turns right back around and goes back where he came from. This could have been prevented if Quantic Dream designed some areas to play better instead of designing them to look better. That is a choice I can respect, but I would personally always go for improving the way the game plays over the way it looks.

The most telling quote from a review of Heavy Rain comes from Gamervision — "Quantic Dream puts forth some truly incredible ideas and concepts as to what a game can be, but they’ll stay ideas and concepts until gamers are willing to accept that they deserve more than another GTA or Call of Duty clone."

I would say this is proof that many game reviewers have made a conscious choice to ignore Heavy Rain's flaws because they do not trust gamers to try it if they are honest about them. It shouldn't surprise any discerning reader that this review also contained the phrase "If you’re able to overlook this shortcoming."

I, however, trust you enough to tell you that Heavy Rain is a deeply flawed game, but is also one that I think every gamer should try at least once. Giving Heavy Rain a near perfect score undermines the many areas that Quantic Dream can improve upon the formula, and will have the affect of watering down the ability of these same reviewers to give them credit for making these improvements in the future. I can sympathize with their reasons, but I think they are underestimating gamers by doing so. There might be some aspects that drive you crazy, or perhaps you might be one of the lucky ones that gets a perfect play-through, but I guarantee that this is a game you will hope other developers will emulate.

I think that is a better compliment than any perfect score could ever be.