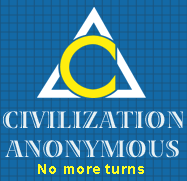 When Civilization V was announced my first reaction was “oh, crap!” I got worried right away. I’ve clocked hundreds of hours playing the earlier Civ games, losing weeks — perhaps months — of my life. I’m not ready for a new one; I still get sucked into Civ 4 every month or two, and end up falling way behind on whatever it is I’m supposed to be doing.

My worry soon turned to excitement, though, which is a big deal because I generally don’t get excited about anything. It’s a new Civilization game, and it has a hex grid, ranged combat, and expanded diplomacy. I had some reservations about the removal of religion, but it was never done well in the first place.

Each new instalment adds something that makes you wonder how it was missing from the previous games. Civ 3 added culture, conscription, and mobilisation. Civ 4 added religion, Great People, and civics. Both expanded the tech tree, improved combat, diplomacy, and trade, and refined every little detail of gameplay while streamlining the interface and enhancing the presentation. Civ 5 promises to be the most mod-able yet, overhauls the tired and broken combat system, and draws on the lessons learned from Civilization Revolution, the Colonization remake, and Lead Designer Jon Schafer’s expert knowledge of Panzer General, amongst other things. The new AI and leaders look like they’ll make the single player game a more unique, individual, and varied experience, with each civ having its own agenda that can vary greatly across campaigns. I can’t see how it won’t be the best Civilization to date. 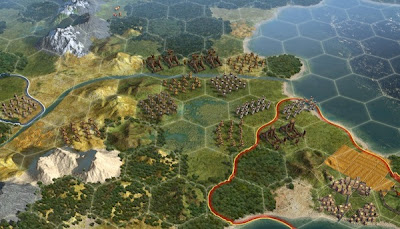 But the more I thought about it the more my excitement turned to something more troubling. I began to feel scared. I’m afraid that Civilization V will come into my life and take it over completely. I have the discipline and self-control to ensure that I would stick to my main commitments — attending university, rehearsing for a dance production, staying alive — but these could easily become robotic processes, where I do just enough to manage and never stop thinking about the game. With each new instalment I find it harder to walk away from Civilization. At some point I’ll hit my limit.

I still remember Civ 4’s viral marketing campaign — a support group called Civilization Anonymous. It was incredibly clever and funny, taking the famous call of the Civ addict — “one more turn” — to form the tagline “no more turns” and an associated 12 step recovery procedure. What made it so powerful was not the near-flawless execution and fine detail; it was the fact that it could have been real. Civilization is that engrossing. You just have to build a city over there. You need to defend this attack, or to discover that technology, or be the first to circumnavigate the world. You can’t leave until you’ve got your revenge for a the pillaging of your territory. You’re stuck in the middle of a war on two fronts; you couldn’t possibly go away and come back lest you forget the strategic intricacies of the situation. The World Wonder you’ve been building for the past 50 turns is about to complete — it wouldn’t hurt to wait till it’s done.

There’s always something else to do before you stop playing. Several hours later the sun comes up and you realise you played all night. It’s time to go to school or work. But your mind is still in the game. You think about it all day, plotting out a strategy for the next hundred turns. The damn Mongols will never see it coming. Those jerks in Egypt will be a pushover with the Aztecs on your side. But you need to play nice with the Romans — they could do a lot of damage while you’re off fighting on the next continent. When you get home and resume playing things start going wrong. The Egyptians won’t declare war on you, and now they’ve signed a pact with the Aztecs. Worse, the Mongols were secretly preparing to stab you in the back before you could do it to them. And the Germans just jumped ahead in the technology race. Soon you’ll lose your edge over your rivals. You can't let that happen. So you keep playing. And playing. 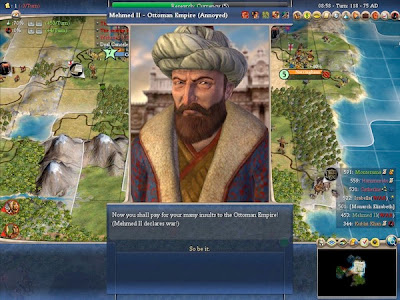 What if I can’t break out of this cycle in Civ 5? Even if I do (and I almost certainly will), how many days or weeks of my life will I lose in the process. I can’t wait to play Civ 5, but a part of me wishes it just doesn’t come out. Then I’d never have to deal with the fallout of my indiscretion.