This is part two in a beginner's expedition to be somewhat of a master at Street Fighter IV. I haven't really been dedicated to a Street Fighter game since SFII, so these are my chronicles on being a somewhat competent fighting game gamer (if that's an appropriate title to use here). 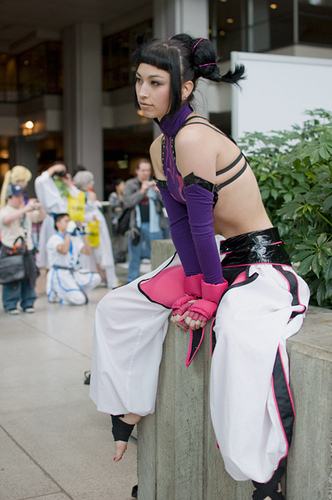 So anyway, I decided to go with Juri (see pic to your right…you know you want her as your girlfriend).

I've tried a few of the fighters, and I was most comfortable with her. I like her too cause she's somewhat of a bad ass, not like DeeJay or Rufus. Or El Fuerte for that matter.

I guess ethnic stereotyping can be fun!!

Anyway, her special movies are easy to do, and her attacks are pretty strong, not to mention her super and ultra combos are easy to execute. The unfortunate bad side about Juri is that she's weak defensively. Especially against Zangief.

I got to Medium eventually and I feel pretty comfortable there. Not too hard, not to easy either. I don't want to push it too hard, else I may swear off it again just like I did with SFIV. I'm having fun winning, and I'm being challenged so it's not like it's a cake walk. Once I progressed to hard, the challenges ramped up significantly. I dabble with that level every now and then, if I feel like being humiliated.

The trials are hard as shit, not to mention the combos. With the Street Fighter IV series of games, you can execute a great many of combos (if you can memorize them all), however they are extraordinarily difficult to execute. Each button press has to be EXACT, and if you are .001 second off, the combo is screwed. I's frustrating when you're in the trial mode and you're hitting the buttons in the exact sequential order, but it doesn't register as a fully completed combo. I think more time should have been dedicated to granting a little more leeway with that. I know, I know it's supposed to be a challenge, but let's not make it borderline impossible.

That brings me to my next question: Is the 6-button gamepad worth it? That's a call out to all the expert Street Fighterseseses (sp??? ) out there, I need your opinion if it makes everything easier. 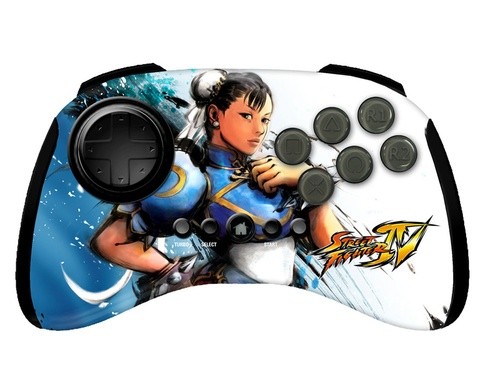 The trials I go to every now and then to brush up on some of the easier combos, and I hit up online every now and then for quick battles. It's surprisingly smooth and has very quick connection results, so I'm not waiting 5 minutes to connect and play simply 3 rounds (if it gets that far with me) with another fighter. The lobbies are a nice touch, it brings back that old arcade feel where you're playing amongst five players, and you're watching the fights, and waiting for your turn. A genius idea, but sometimes it takes too long, I'd rather just get into quick fights. Lobbies would be great if your friends were involved (sadly, I BARELY have any friends on PS3…anyone wanna be my friend?).

So I'm experiencing Super Street Fighter IV to its fullest now (almost), and I must say that I'm still getting my ass kicked, especially online. Some of these guys are real good, and they know their characters real well. Me, not so much yet. But each expedition begins with one foot in front of the other. I can't jump online and expect to own the courts.

What makes the Street Fighter series so great, I think, is that as frustratingly difficult it is, both in playing the Computer (CPU) and another player, there is a sense of humility to it. One fight can go extremely well for you, and the next, your face is ripped off and used to wax a car with. It can give you an immense sense of accomplishment and pride, and also destroy everything that makes you human on the inside.

What other game out there can really do that, and still get you to pick up the controller, or joystick, and keep playing and playing?

I'll be honest, over the past couple weeks I've barely picked it up. Alan Wake, Alpha Protocol, and Red Dead have kept me occupied. But each time I'm still retaining my skill.

Next in Part III: will he choose another character to play with? Will he graduate to ass-kickery status and turn on the headset just to say "F%#$ yo' couch n#$%&!"?