Some of my more hardcore gaming friends had gotten into an argument over something that we take for granted: regenerating health. I immediately laughed and tried to remember the last game that didn't make the edges of the screen go red when you so much as stubbed your toe. Then I remembered some of my favorite games: Max Payne 2, Half Life 2, Halo 1, Mass Effect. God those do seem like a long time ago . . . but they got along fine without regenerating health. And now I wonder . . . is regenerating health good for the genre?

Though I'm sure that there were a handful of games before it, the Call of Duty games and Halo 2 were probably the first games that popularized regenerating health. Get shot, Get low, Get better. And I think we can all bring ourselves to say that these (with Half Life 2) can be argued as the most revolutionary/best shooters of our generation. So obviously regenerating health isn't THAT bad right?

Yet Half Life 2 doesn't use regenerating health, and it could arguably be considered better than any COD or Halo game ever made. And Halo 1 (which I consider the best) managed to spark the wave of Space Marine Shooters while having NON-regenerating health. We never played Halo 1 and Half Life 2 and went, "Gosh, this would be a lot better if the whole screen went red whenever I got shot!". I consider Max Payne to be one of the best and difficult 3rd person shooters ever yet I never wanted Max to magically regenerate wounds. Conversely, we never play Modern Warfare 2 or the latest Halo and go, "Jesus why can't I have an arbitrary amount of health instead of this stupid red haze?". So which is better?

From a hypercritical, devil's advocate kind of guy like me this is going to sound like a very wishy-washy answer, but I'll say it: both have their place.

The obvious downside of a health bar is that every shot you take is a permanent cripple until you clear the room of enemies and find the next first aid kit/health pack. This isn't so bad when it's just a series small skirmish, but when you get into more large scale battles, one bad move can make your chances of survival plummet. Also, games where half the time you will take a couple shots from an enemy you didn't see when entering a new area (prevalent in Modern Warfare 2), having your life-bar cut in half with 10 enemies standing between you and the nearest health pack can make the game impossible. Of course, regenerating health in situations where skilled gunplay and cover is perfectly adequate would make the game horrendously easy.

Can you imagine in Half Life 2, having regenerating health in Ravenholm? 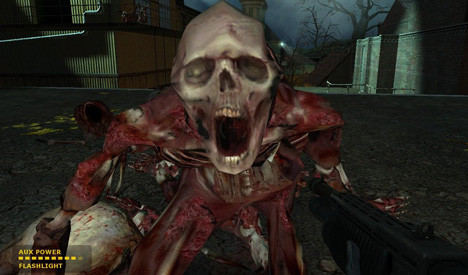 This guy  wouldn't be HALF as scary if you could just heal yourself by hiding for two seconds.

Ultimately, as long as a shooter 1st or 3rd person works well, I have no problem with its choice of health. There are two specific ones I'd like to point out that I wish had used the health bar.

Mass Effect 2 – Yes, this game is primarily a shooter. You have powers, but you mainly shoot. I'll start by saying I genuinely believe Mass Effect 2 is one of the best RPG shooters EVER released . . . but it was too damn easy. Most weaker enemies can be taken out with headshot with your pistol before they get near enough to do any real damage and most of the dangerous ones are slow enough that you can just duck for cover until their attack passes and then unload all three of your squad-members' powers on it at the same time. And because you will usually only take a handful of hits because you/re always in cover, it's almost IMPOSSIBLE to die in this game.

There were some sections where I literally moved from side to side whilst decimating enemy forces with my handgun. With stat-building, biotic and tech powers, careful and planned combat is should be necessary, not just an option.

It's cool that the medi-gels limit how much you can reanimate your teammates, but in Mass Effect 1 you usually only used it against bosses or against large amounts of rocket geth. In that case the time it took for the power to resurrect your teammates a long enough time to recharge that I would say tying its usage to medi-gel is useless. Having how many times you can HEAL yourself with medi-gel however, makes sure that you don't go charging guns-a-blazing. Don't get me wrong, this switch to regenerative health is the one fleck of dirt on a masterpiece of a game.

Gears of War 1 & 2 – Same complaint really, the game is just too easy. I understand that if I want more of a challenge I can up the difficulty but the normal difficulty isn't even "normal", it's literally if I really wanted to I could probably get through the whole game dying only in sections where one hit kills were possible. There simply aren't encounters large scale enough to merit the usage of regenerating health. Once again, I consider this a great game, just wish they had moved on to health bars OR made the encounters more difficult.