Dark Void was a flop. It was reviewed poorly and didn’t sell well. After playing it myself, I’m actually surprised it was not better received. I think a large part of its failure can be blamed on Capcom's marketing department. Instead of focusing on the Rocketeer inspired imagery, the ads and box art should have simply stated “Dark Void: The End Boss Is a Robot Cthulhu Nazi.” The jetpack is a tease throughout most of the game, and its absence is always disappointing. 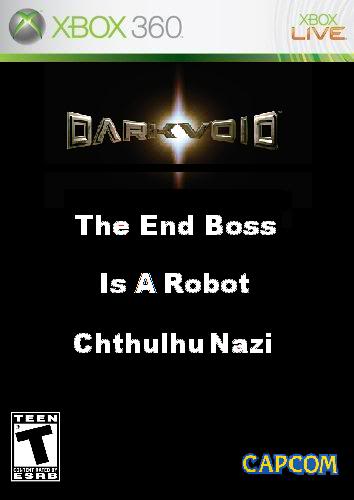 The game follows a strict kitchen sink philosophy through the story and gameplay. Set in 1938 you play as a cargo pilot with a past as a soldier. His plane flies into the Bermuda Triangle, and he enters a world where he must battle aliens who are helping the Nazis begin the Second World War. Our hero, Will, is aided by Nikola Tesla, his jetpack, and an ancient prophecy proclaiming him as “THE ONE.” Just when you think they couldn’t fit anything else into the story, they toss Lovecraft into the last five minutes of the game.The only ridiculous tropes not included are the ability to turn into a werewolf and wield a lightsaber.

The gameplay is also a weird blend of different play styles. Much of the early game is similar to Gears of War or Uncharted, but once equipped with the jetpack Will battles aliens on ground and air, with a seamless transition between the two. Unfortunately, too much of the game is spent on the ground, and it’s at least an hour or two before you get your first jetpack. Once you do get geared up, you are limited to a double jump. This slow pacing is made worse because the game Metroids you after a much too short prologue with a fully powered pack. When you finally become accustomed to it, the obligatory imprisonment scene happens and you lose the jetpack again. 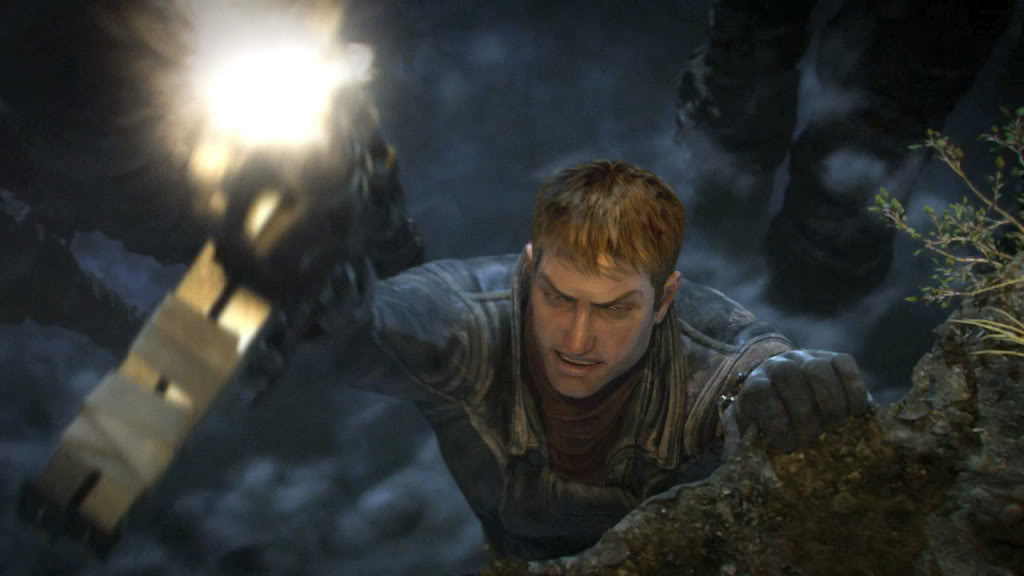 This would be a lot easier with a jetpack, huh?
Dark Void has a reputation as a joke or a bad game, but it’s really just mediocre. The game could have been fantastic if the developers committed fully to the jetpack, but instead they add too many cover based fights on the ground. There are a few cover based fights set vertically, and these are exciting. An early scene has you fighting through wrecked WWII battleship that is about to plummet over a waterfall. Most of the flying sections of the game require you to land briefly and complete a goal in enemy bases before you take off again, and every time it impressed me that I could do this without any loading screens and hiccups. The environments are also gorgeous, and this may be one of the better third-party uses of the Unreal engine I’ve seen. The game never decides what it wants to be, and it feels like Airtight Games knew the flight mechanics were a risk and threw in tried and true gameplay in case it failed. It’s a shame they didn’t have the confidence to focus on the jetpack, which is really effective when you finally get to make full use of it. 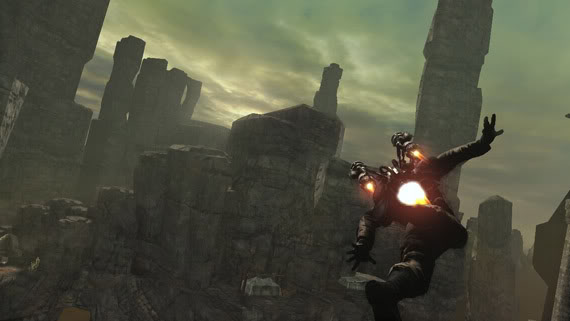 Dark Void is plummeting in price wherever you look, so at this point I give it a B. It’s technically solid with great environmental graphics and a soundtrack by Bear McCreary (of Battlestar Galactica), and I rarely had a problem with the controls. Unfortunately, it has too much baggage to have warranted a $60 purchase. Take the chance on it if you need a brief action game, but just don’t judge it by the cover.