Spoiler warning for every game in the tags. Most noteworthy is spoilers for portal, halo 3, and Metal Gear Solid 4.

A while back I had a thought when watching the portal 2 e3 trailer and hearing the eerie music while the old testing center reassembled itself in front of me. I found myself thinking about how interesting it was to see the ways time had changed the testing facility and how impressively creepy the idea of GLADOS tearing parts of it down and rebuilding was.

Level geometry is a huge part of nostalgia in video games for me. I, for some reason, experience a great swell of positive feelings whenever I see a recreation of an old game environment in a new game. The sense of place you get from seeing a level transcend it's original game is very tangible to me. Once it is not just a level in one game it is a place in two. You revisit it, you interact with It in new ways, or in familiar ways with new thoughts about it.

Still not every game gets it right, and I am hoping that Portal 2 truly delivers on a return to an old environment in an impressive way. Since I feel so strongly about this I am going to use various examples of games that have attempted to use or referance old spaces in new games and talk about how what works and what doesn't from my perspective.

I think I first became consciously interested in the recreation of old spaces in new games around the release of halo 2. The multiplayer had some genuinely fun recreations of old maps from halo 1 in it, and DLC added even more. Still, when I entered the second halo ring you find in that game I was disappointed that it was a completely different space. Visually distinct from Halo 1 in almost every way and with no repeated geometry. I was hoping that parts of the original game would find their way over with a common theme to the spaces but they erred on the side of giving people a new experience through and through. Which makes sense to an extent. They wouldn't want to be accused of recycling instead of creating.

Then halo 3 came along. All through this game's single player campaign was this sense of history and finality. This was the end of the Master chief story arch and they were taking care of every loose end. When I saw the replacement for the Halo ring from the first game climbing out of the fog I was stunned. Here it was, they were suggesting a space that was the first game brought back from the grave. 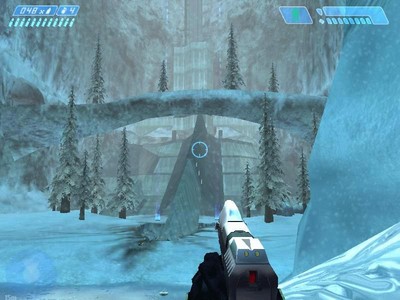 Unfortunately, they failed to deliver this promise. There are a few spaces that look like the original game and that are arranged similarly, but for the most part this was a completely different space in look, feel, and functionality. It was a new level that had two or three elements that looked like the old level from a distance. Once you are on the structure you are ascending it in the opposite direction, the proportions are changed, and the apex of the structure and the rooms beyond are not at all similar. Every space surrounding the structure is also completely rearanged and changed from the original level design. Apparently the forerunners didn't hold on to the old Halo ring's blueprints.

It's the thought that counts I guess…..

I was honestly disappointed, maybe more then I should have been. Then add on the fact that they ended the halo trilogy with a warthog run that was more visually impressive but played vastly worse then the original game's hog run (lots of trial and error deaths.) and I had to accept that the people who made Halo 3 had completely moved on. Halo 1's play style, story, and all of it's levels, were well and truly dead. Their spaces locked off in the original game for all time to be barely acknowledged as part of a whole.

In order for nostalgia to be had at the existence of a space that is the same or similar to a space in a previous game you HAVE to be as faithful to the original space as you possibly can. It can't just look like an old space in certain details. It has to have the same pathways and sight lines of the original space. Every movement and interaction with that space has to have familiarity to reinforce your memory.

Another game that played at reusing old level geometry was Saint's row 2 (and Crackdown 2, I'm told). They set the game in the same city as the first game, with the sort of changes that supposedly would happen to a city over time. This however was completely irrelevant to me.

I had not learned any of the spaces in Saints row very well because it was an entire huge city. There are some spaces that are too big to be that nostalgic over. People don't get nostalgic about their home town they get nostalgic about the places in their hometown that they spent all their time in. Their old house, favorite shops, schools, street corners they waited for the bus.

Saints Row 2 redesigned all those places (The church in particular was actually a plot point in no longer being there as it was) and in doing so completely removed itself from the original game. I didn't even spend that much time in the places I might have remembered from it anyway. 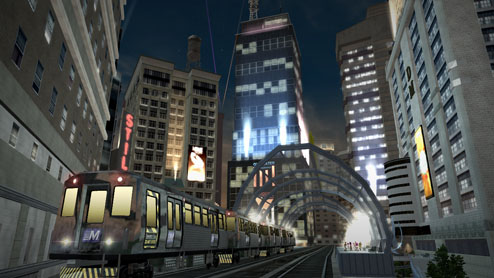 In order to have nostalgia for a space it has to be small enough to be mapped out in your memory, and it has to be significant enough in your interactions with it to be worth keeping in that memory.

Then along came Metal Gear Solid 4. An absolute case study in the phenomena I am discussing here. An entire level of MGS4 is dedicated to recreating note for note an aged but very faithful version of a large chunk of Shadow Moses, the facility the entire first game took place in. 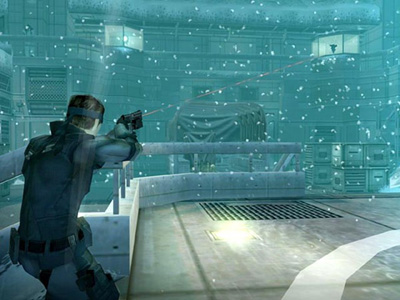 Now this, a bunch of gamers remember.

This was stirring. Even for me when I had only finished the recent gamecube remake of the game rather then the original game. (I started in on the series when MGS2 came out and was never good enough at the original to finish it.)

Every note of your movement through the space of Shadow Moses was not only meant to portray a deep understanding of, and nostalgia for, the original game. It was also meant to portray exactly how far away those old times were. Parts of the environment were in disrepair, it was overrun with inhuman robot enemies rather then the soldiers you were used to. Some parts were inaccessible.Still, it was most definitely the same place.

SQUEE! Look! It's RIGHT THERE!

It looked the same, I moved through it in much the same way as I did before despite changes in gameplay. It was a place for me, and with the memories snake was having during the proceedings it perfectly conveyed how to feel about this space. The mourning of lost glory and youth and the enormity of the tasks ahead to put everything that happened here to rest.

A good tribute to an old level in a game treats the level not as just a space to play in, it treats it as a character and uses your time with it to briefly reflect on what that space meant to you as a gamer in the past.

I hope Portal 2 keeps these sorts of details in mind. I know it's not meant to be as dramatic as metal gear solid and it has to mostly use new level geometry to be a good game and a proper sequel to the original game. Still after watching the portal E3 trailer I felt a tingling excitement at the return of the Aperture Science testing facility and GLADOS.

I remembered how it felt near the end of portal to drop into an old test room after I had broken free of GLADOS and how it felt to remember it and how far I had come as I cheated the test to get out in a new way.

Now I want to feel that feeling times ten, even if it's only a few tiny rooms in a much larger new experience.