It’s difficult to understand the necessity of teamwork in the video game industry until you participate in a project like this, even as small as it was. 13 various artists, programmers, and musicians put their heads together in the Game Design Seminar, a class shared by the Cleveland Institute of Art and Case Western Reserve University, in the fall of ’09.  As a testament to our perseverance and dedication, we continued work on the game after the class ended, working well into the spring semester of 2010, which happened to be the final semester in college for many of us.

In this piece, fellow artists who contributed to ChromaWaves reconvene to share their thoughts and lessons learned, looking back after the game has been released.

I strongly recommend building a game around the desired experience it should provide/evoke in the player. For us, the goal was to have a minimal investment accessible time killer that rewarded expertise while softly punishing failure (5 lives).

For student semester-long projects refrain from using stories; making games at this stage is about making play. Don't just rehash a game you like with different story or art, nor replace something you already know with fan art/fan fiction. The only benefit I can see of this scenario, where students copy existing games with a twist, is when they are at a more basic learning level. Learning by dissecting a known game helps them understand the basics of what makes a game, and equips them with the knowledge on how to make another game based on their own creative vision.

This philosophy might sound restrictive, but you quickly learn that a grounded story constrains your workflow very fast, very early on, and if it's your first game project it's difficult to have the foresight to recognize this in your scope. Stories make your game dependent on being a particular scale to be of any benefit to the user. When this causes you to run out of time and have to cut parts, you are deeply devaluing the game as a whole. Additionally, your team is most likely composed of art and computer science students, not screenwriters.

Respect the other members of the team or at very least treat them with respect on both the better and worse days of production. Having a core of the team that knows and trusts each other is a huge benefit. Leaving your project creatively open to contributing ideas/designs/solutions is a great way to support this happening.

Keep scale small to allow for iteration and play-testing to refine the game, which is especially important to help resolve disputes and thus build a stronger team, and eventually a stronger game.

We've all probably heard that you need lots of different people from many diverse fields to make a modern video game. What we don't hear quite as often is that it is equally, if not more so, important that every person feels that they have ownership of the game.

This means that each person should generally agree on what they are making, and should have a little piece that was originally their idea. It also means that it is good form to talk about ideas generically, i.e. "the Wave idea," rather than referring to "MY idea."

This helps promote a unified group vision rather than a disjointed collection of individual concepts. This mindset should span the entire development process and extend far into the future, after the game is published. This isn't MY game, it's OURS.

Teamwork lives and dies by the team effectively communicating with itself. Even a year after ChromaWaves was being designed and constructed, I still hold the belief that our secret weapon to getting it completed on time was how many modes of communication we used in that time. There had to have been at least four-to-five ways of getting a hold of a team member at any given moment, and often at any hour of the night: phone call, texting, Steam, e-mail, or (best of all) in-person. Mailing lists weren't just a formality – we kept in touch quite aggressively making the good meetings more fun, and the tougher meetings less awkward.

Physically working in the same space with all the artists day-in and day-out is something I've heard to be a rare occurrence for many young student artists. The ability to swing your chair around and be greeted not only by a friend, but an observant critically constructive eye is hard to truly value within the thicket of college stress. If you can find anyone in your learning experience to share this opportunity with, please do.

For better or worse of our own mental health, we ate and breathed ChromaWaves as a project last fall (though, we were too busy to drink it with all the caffeine college students require to function properly). It was having immediate access to the people making the game that helped us bond faster, and also be decisive when it mattered. This might come as a surprise for what looked like a very open and exploratory project to our peers and curious onlookers.

This goes for both the aesthetics and functionality of ChromaWaves. One of the most challenging aspects of the project, being that it was developed in a college environment, was explaining it during presentations and/or midterm reports. Given our time-frame for making it look and feel anything like we intended on paper, most of the earlier demonstrations seemed to not make any sense to anyone but ourselves. With barely several weeks left at this point you either rethink a lot, or learn to have faith in the ideas you already have.

That was a problem we believed would only get fixed the further we got towards our vision, when all of the final artwork and gameplay linked up, and for the most part we were right. Make no mistake – it's easier looking back, but this doesn't change the fact that It was a huge gamble: we were wagering the entire concept being lost on players. Thankfully, playtesting helped sort this out sooner than later.

We began to learn how to better distribute the weight between the practicality of taking visual shortcuts for the sake of getting a prototype out faster, and on the flip side spending the extra time to commit to and share our vision with users; to make sure what's in our heads was in player's hands with earlier builds.

At times, this required straight up accepting we wouldn't have our work done "on-time", and be content with meeting our own deadlines as well as accepting responsibility when not meeting those set by our mentors. We probably wouldn't have gotten away with this as unscathed as one could in the industry, under the very real pressure of an actual publisher and the expectations of a greater installed audience base.

I read and hear a lot of wishful thinking, of how much better the medium and industry might be if an unquantifiable amount of creativity was at the forefront of every project for new platforms from the ground up. It sometimes feels like everyone wishes every other developer was as experimental and creative as possible these days. This was easier said than done especially during our time on ChromaWaves not only because creativity is difficult to come by, but also because our peers had trouble responding constructively to creativity-in-transit. People, gamers and non-gamers alike, are eager to see such things working and done before offering useful feedback.

To these challenges I suggest asking others for patience, and asking yourself to be sharp when it comes to presenting your work. It is a form of language, just as the game itself is – use it wisely.

Making an ambient minimalist game was slightly cleaner to design, sure, but it was much messier where it counted most. It was a huge risk to present the game unless it was all in place, because it was often misrepresentative of our efforts. This was a project that literally didn't fall together until the final week/day of the semester. We learned to be very patient with our own ideas, and more importantly with the harsher critiques they received.

We wanted to focus this article on the development process for ChromaWaves, but since many of you probably don't know what ChromaWaves is quite yet, following is a brief run-through.

Players shoot colored bullets at abstract, colorful enemies by flicking a water droplet through a ring of pigment. This ring is dyed with one of six selectable (or mixable in some case) colors, by tapping on a primary color (red, blue, or yellow), or multi-touching two primary colors to create a secondary (orange, green, or purple). By hitting all three, you receive black.

The more successful you are at matching colors, and thus defeating enemies in single swipes one after the other, the faster your omni-wave bar will fill on the right of the screen. When it’s reached the top it will don the active color, and when used it releases an omni-directional wave of that color, wiping out all enemies that share it.

Enemies are constantly coming towards the player, a water droplet (or "the core" as we've dubbed it over time) so the basic goal is one of survival. They also have a chance to leave behind "stains" of their color when defeated, which will dye other enemies that color if they pass through it. In this way, you can have temporary shields of color surrounding the core over time.

After five hits, the core collapses.

SUPPORT A GOOD CAUSE 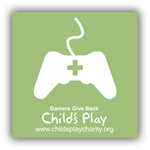 And on July 27, 2010, all that work finally paid off.  Well, not literally, for us anyhow.  As the description says, “All profits that iGameTeam would otherwise earn from ChromaWaves sales will be donated to Child’s Play, a charitable game industry organization, ‘dedicated to improving the lives of children with toys and games in our network of over 60 hospitals worldwide.’” So donate roughly 70 cents of the 99  you'd spend (which is our cut) and receive a complimentary game!

When deciding how we wanted to price the game, we considered the uniqueness of our development track for both the Game Production course, as well as the wider game industry, and wanted to sell ChromaWaves in a unique way too. Casual play can be an effective tool for them as recovering patients, and ChromaWaves presents an ideal opportunity to support such a cause – we hope you will too.

You can find ChromaWaves on iTunes, by following this link. (We would really appreciate you leaving a review if you decide to pick the game up!), or online at our official website: www.chromawaves.com.

If you're interested to HEAR more about our development process and the Game Production course itself, we have two podcast episodes themed around that as well, at The Escape Route blog.