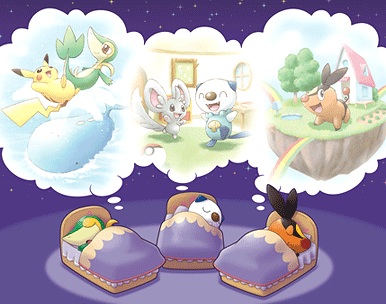 It seems no matter how old I get, I'll always like Pokemon. Not like my sporadic interest in Halo or my wavering personality on SSFIV. There's always something I want to train, level, and create to be my next great contender, in theory anyways.

I thrive on theory craft and meta-game rules. I love seeing how the game-before-the-game pans out and seeing how it works in actual gameplay. Not everything has been translated since Black and White released in Japan, but Serebii amazingly has a seemingly fully compiled list of all the Dream World abilities the previous Pokemon of generation IV can get, and boy are there some interesting things that'll shake up the tiers. Here are my favorites.

Imagine the synergy Charizard will get off of this ability. Get sunlight into play on the field, then send out a choice scarfed Charizard? With the boost in speed with the scarf, a sunlight boosted, solar powered STAB (same type advantage bonus) flamethrower will hurt a lot of opponents.

Finally, a pokemon that isn't an uber with a weather changing ability! Plus Ninetails can hold her own really well. Ninetails can even learn Solarbeam and has some decent speed in its favor. Politoed also plays the opposing role with Drizzle, but Politoed doesn't really have the stats to compete in my opinion and will remain relegated to the lower tiers.

Now we can start abusing Hydration, finally! Vaporeon is naturally bulky so throw in Rest and have rain support and you have yourself a really annoying wall that can fight back with Surf. Lapras also gets Hydration and is capable of learning electric attacks like Thunderbolt or Thunder.

Yup. Yanmega and Ninjask's signature ability is being spread around. These strangely underwhelming glass cannons maybe getting a second chance at the tiers if they abuse Speed Boost for all its worth. They've always had great attack but never had the ability to sweep with speed or take a hit with their defenses. Maybe scout with Protect and things will change for these two.

God dammit. Something I hate fighting is even harder to fight now.

Oh wow. Magnezone has never been known for its speed but it's bulkiness and electric attacks. Now with Analyze, those Thunderbolts are even more dangerous. Basically, this new ability powers up the user's attacks if it attacks afterwards, so yeah. Instant power up for something as slow as Magnezone.

Leafeon has always been lacking in speed. She can learn a very deadly physical grass attack, Leaf Blade, and has the attack to pull it off. She can also learn Swords Dance. So with sunlight in affect, she becomes a threatening sweeper.

This list isn't even taking into account the new moves being introduced. Smog On is up in arms for Cloyster because it learns a new move called Shell Break, which basically lowers both defense values in favor of sharply boosting both attacks and speed. Goddamn wow.

Do you see any Pokemon that interest you on the Dream World list that gives them a new chance to be competitive?