Some of you will remember the Game Diaries I wrote for Rockstar’s boarding-school sandbox game Bully back in March, which covered my experience one play-session at a time, gradually fleshing out what you might describe as a review. I concluded the series with the promise that the Game Diary would return with a different game and slightly different format. This is the fulfilment of that promise.

Over the next week-or-two I will describe, critique, and analyze my first campaign in Civilization 5. I hope you enjoy reading.

The story of my (hopefully) glorious Egyptian civilization began in rather unspectacular terms, with my first city built alongside a small river next to what I could only assume was the ocean. A veteran of the series, I quickly recognized that the surrounding terrain included desert, flood plains, and an oasis, but I was puzzled by the appearance of the other tiles (forest and cotton). It turns out that the visual update of Civ 5 is only really an upgrade if your graphics card can handle something beyond minimum detail settings. As it is, the game looks worse than Civ 4 on my computer. 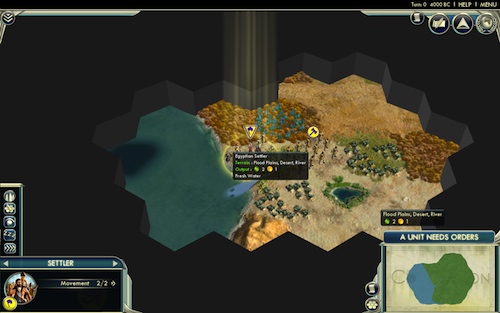 The gorgeous clouds that you see in official screenshots don’t look so nice when the detail is turned down. In fact, they seem incredibly intimidating and imposing — my initial feelings were along the lines of claustrophobia, as a jagged grey and black wall hemmed me in to this tiny space. I felt desperate to escape the shackles of my oppressive confines. I did the only thing I could do to ease this tension; I explored.

Unfortunately, I quickly reached the limits of what I could achieve with this strategy given my meagre resources. I was stuck on an island. A small, shitty island, with no hope of escape until I could discover Optics (which allows the building of triremes). For the next thousand years my civilization waited, with nowhere to go, no-one to talk to (except Genoa, a nearby city-state I already planned to conquer), and no-one to fight. Life was dull. But I persevered. 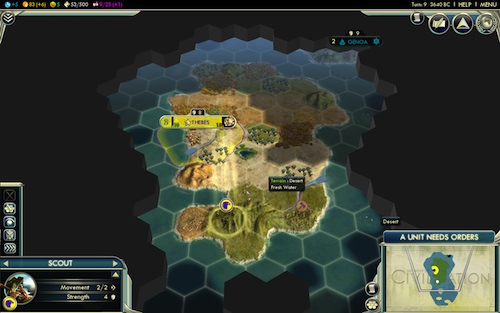 Is anybody out there?

My first trireme quickly met the Iroquois people in a depressingly uneventful encounter. Things immediately started to get more interesting, though, as in the next turn I discovered Krakatoa volcano — a Natural Wonder, which gives a happiness bonus — and had my scout, which had set off exploring in a different direction to the trireme, ambushed by a Barbarian Brute. Barely alive, I fled to the seas, disembarking on a nearby island where I could rest until healed.

Further exploration uncovered two more city-states — Edinburgh and Stockholm — and another civilization, Siam, whose leader annoyed me by refusing to give Gems in exchange for a pitiful amount of Gold. But they were too far away and I was too militarily weak to warrant a declaration of war. The Iroquois contacted me in the same turn to request a Pact of Cooperation, which appears to be the Civ 5 equivalent of a (formal) peace treaty. I see no point in a name change, especially to something so stilted, so I hope I’m wrong. If it turns out to be the new name for a Defensive Pact I’ll be similarly disappointed — why change a perfectly descriptive and appropriate name to something vague and stilted?

The session ended with some fresh excitement. Memphis — my second city — was founded in 1380 BC, with a work boat set to task on the nearby fish resource. The next turn I entered a research agreement with the Songhai civilization — agreeing to the proposal before I actually knew what it even meant, just because it sounded cool. And my trireme, by now more than half-way across the world, was ambushed by four Barbarian Galleys — two appearing from the retreating fog and two appearing to more-or-less block off my retreat. Somehow, I managed to escape with the scantest health remaining, at which point I discovered the Great Barrier Reef. I can only pray my brave trireme makes it through the night. 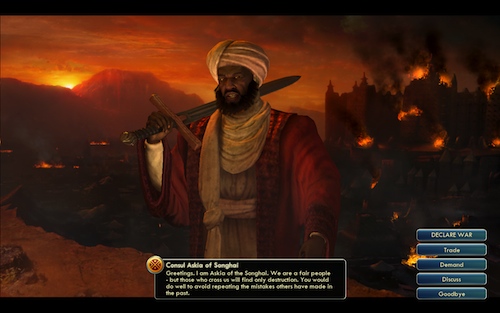 Hey, dude, I'm not sure how to tell you this, but the city behind you is on fire.

I’m ranked eighth in Ibn Battuta’s list of the People with the Pointiest Sticks. Shameful.

Others in the series:

I decided to go with Prince (“normal”) difficulty on a standard map size, with standard game length. My civilization was determined randomly, as were my opponents and the map itself. I have nearly all of the graphical details set to "low" or "minimum."