Last time on Game Diary: Civilization 5, my first trireme narrowly escaped multiple barbarian ambushes while my second trireme was no match for the Genoan city-state. In other happenings I was disappointed to find that my poor treatment of Genoa bore no consequences — they did not declare war on me when our relations reached the minimum value of -60.

And, through war against Genoa, I discovered that combat is a very different beast in this new Civilization game, requiring far more strategy and planning than ever before.

With the war against Genoa on hold while I built some new units, I thought I’d be in for another quiet period. Then my civilization entered a Golden Age, which gives increased productivity, quicker growth, and increased income, research, and culture output, but only for a limited time. I remember it was twenty turns in Civ 4, but am not sure how long it lasts in Civ 5 (I forgot to check).

Two turns later, my first Great Person was “born.” Great General Zhuge Liang’s combat bonus (to nearby friendly units) struck me as the perfect compliment to my amassing armies, so I decided to keep him around rather than use him to build a Citadel (which appears to be a fort with a few extra perks). I’m disappointed that the option to use a Great General for a Military Academy — whereby units can be built faster in the chosen city — failed to make the transition to the new game. 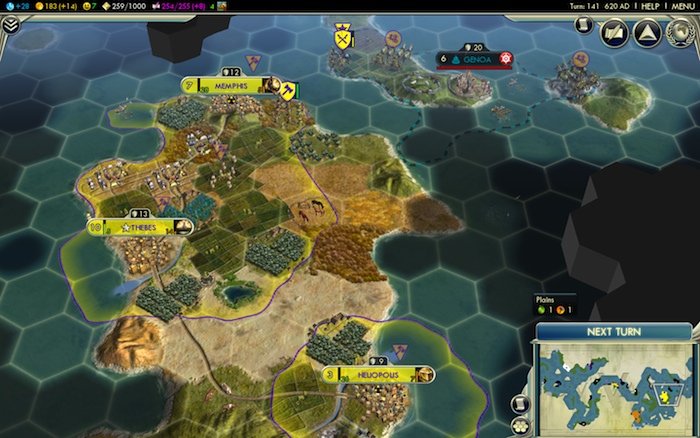 At the turn of the millennium, in the year 0 AD (which, it should be said, doesn’t actually exist in the Gregorian calendar), I founded my third city, Heliopolis, in the south east corner of my small island. Unless I get really desperate for another city, this will be the last city I build on my homeland, as conventional Civ wisdom tells me there is not enough space on the east coast to build a new one without negatively impacting on the others.

My beloved trireme, now almost three thousand years old, was still going strong after a brief return to home waters (to recover from numerous barbarian attacks, which left it at just 1 HP). I had sent it northward for the latest bout of exploration, where it turns out the Romans and Greeks reside. 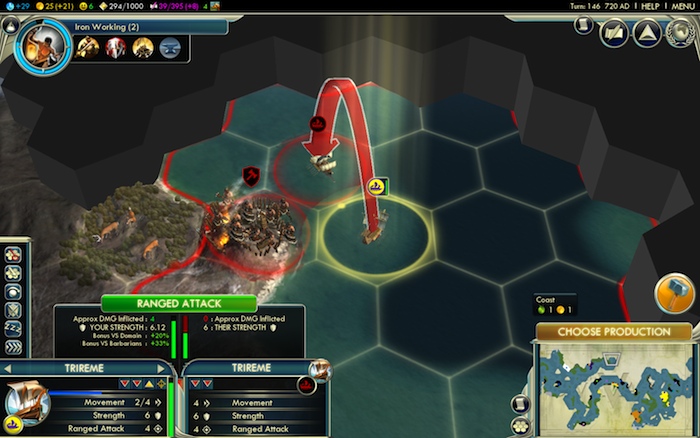 I'm going to be very sad if this trireme is ever destroyed.

For reasons unknown to me, when I met the Romans the “Crucify Him” scene from Jesus Christ Superstar began playing repeatedly in my head — perhaps something to do with the stylized appearance of Caesar. (And thanks to that recollection I now have snippets of several songs from the musical disrupting my concentration.) 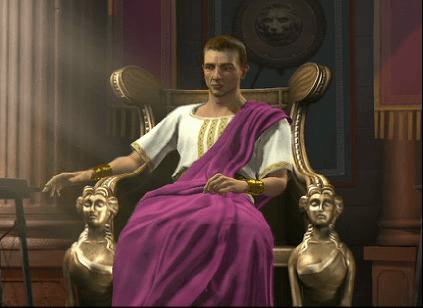 Fast forward to 640 AD, and I still hadn’t made any ground against Genoa. The lack of land tiles around the city (just one directly adjacent; two others within two spaces) seems to be my biggest stumbling block. Unless I can get some units upgraded to amphibious, which lets you attack from water without penalty, or I can get some ships with really good bombardment abilities, I fear the war with Genoa may stretch on for another thousand years.

I thought perhaps the discovery of Mathematics and, shortly thereafter, Iron Working would help my plight, but the only source of iron nearby is just outside Genoa. Now I’m in a catch-22 situation where the thing that will definitely give me units strong enough to take the city is only attainable if I can seize control of Genoa.

I’m sure I could beat the Genoans with a catapult and a swordsman, but I can’t build them without that precious mineral. I need iron. And I have no idea how or where I’m going to get it.

Just before I ended the session, I was asked by the Greeks to form a Pact of Secrecy. I’ll be interested to see how this plays out, and what exactly a Pact of Secrecy does to affect relations between civilizations. It seems far more interesting than the awkwardly-titled Pact of Cooperation I entered with the Iroquois back in the first Game Diary.

I’m ranked fifth in Pliny’s list of The People with the Pointiest Sticks. Moving up.