For better or worse, voice acting is commonplace in almost every game I play nowadays. What I notice first is the horribly forced emotions that accompany inexperienced talents. Next I realize I don't like the actor's voice; or that the voice is fine but doesn't fit the character's shoes, metaphorically of course. There are a myriad of ways that voice acting, even from good actors, can dislodge me from the surreal game environment I am desperately trying to engage. Likewise, there are a myriad of considerations and obstacles for developers to overcome when choosing the right voice actor.

Even when developers try their best (given the benefit of the doubt) to create their games with solid voice acting, the most that arises is a game where the voices you hear simply don't bring you out of the experience – congratulations, you just got a C on your test. Voice acting has an untapped potential that can push the envelope of games to a higher level. One recent game in particular has done more than merely preventing me from untangling myself with the game's experience, it actually added loops and tied more knots! 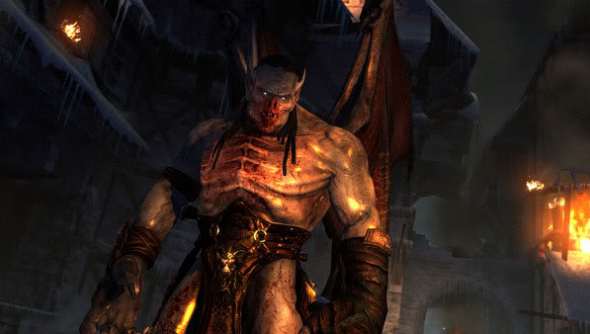 Konami's Castlevania: Lords of Shadow enlisted the talent, the legend, Patrick Stewart to narrate the game, as well as play a role in it. There are a couple reasons why this particular actors voice works its magic on us in the way it does. The same reasons, once realized and exploited, many other actors could potentially do the same.

When you listen to Stewart's voice there are many thoughts, feelings, and ideas that flow into your mind. You might think that because of his celebrity status it could do the exact opposite of what is intended, pulling you out of your experience. I don't believe this to be the case, at least not for me.

Many of us have a connection, on different levels and to differing degrees, to Stewart. Simply hearing his voice reminds us, in a flood of emotion and understanding, that we've been through a lot with this person. We've been on the decks of ships with him, we've ridden worms with him, we've laughed and cried, we've been hurt and healed. Basically we have a preexisting relationship with him that is associated with his tone and enunciation. We trust this person! We've been through a so much with this person! We don't nitpick his dialogue or the way he pronounces a word. We don't second guess the nature of the character he portrays or our feelings towards him (unless that was his intent… that is just good acting). It is akin to the preternatural connections people experience with a sound or a song that they heard while in the womb.

Rather than pulling you out of the game world, you've just been sucked deeper in; bypassing the need to analyze and judge the character you are listening to. If used properly, famous actors and, more importantly, stars of TV series can be exactly what a game needs jump-start the players connection to a character right out of the box. Obviously there are times when the intent is to make the player feel disconnected to a character in the game. In this instance, the outcome can still be achieved by using the proper actor, or by using new talent (since it is important to build and grow the next generation as well).

An example of improper use, continuing with Stewart as the focus, would be Oblivion. When I first heard his voice in the beginning of the game, I was pulled into the world and it was fantastic. However, immediately killing off his character, and any hope of hearing his voice again, severed my ties with the fabric of the world. This could have been avoided in several ways, including but not limited to: Flashbacks and memories, narration, dreams, voicing your conscience, reading your journal to you, etc.

I realize there are flaws in this; cost would be a major concern and so would the fact that many people don't watch TV anymore. But this is simply something that affected me greatly and piqued my interest. I hope you all can at least see where I am coming from.