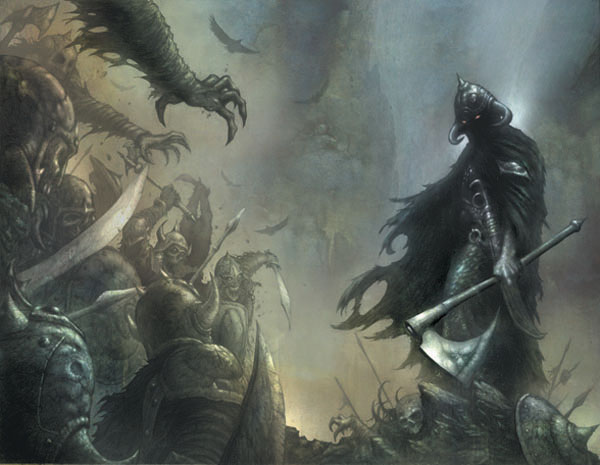 Beautiful isn’t it? Much like this picture, music can metaphorically open up an entire world of wonder and fantasy to its listener. One such listener is a devoted roadie who laments the downward spiral of his beloved Heavy Metal music, which this fantasy represents. But what if the listener was literally sent into this fantasy world with all of the monsters, demons and satanic evil that dwell within it? Can he unleash a brutal onslaught upon it and it make it his, much like the music he once revered? Or will the darkness of this fantasy turned reality consume him? 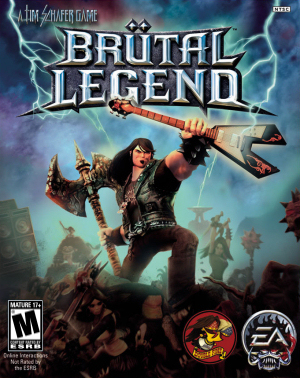 Story: The story of Brutal Legend revolves around Heavy Metal roadie, Eddie Riggs as he is pulled away from his duties of setting up for the crappy New Metal band, Kabbage Boy (God they suck) when he is magically transported to dark and twisted world that kinda resembles a Meat Loaf album cover. If you’re too young to know who Meat Loaf is, then Google him. Oddly enough, Eddie’s love for “Pure Metal” allows to him adapt to his new surroundings almost instantly and he even seems to be enjoying himself a tad too much.

Eddie eventually winds up in a place called Bladehendge, where he is told that he is the chosen one who will help lead the human race in a rebellion against the evil demon Doviculus, who has taken over the world and forced mankind into slavery. So, with the power of rock and his unmatched skills as a roadie, Eddie decides to lend a hand.


The story’s premise is outlandish, yes but that is exactly the point. The plot is solid and the dialogue is clever and even hilarious at certain points. I also like how Jack Black presented himself here. Rather than being the crazy hyperactive guy (the one he plays in just everything he’s in), he made Eddie come off as more of a mellow dude who spouts off the occasional one-liner and made him into a legit badass in the process!

Music lovers (fans of the Metal genre to be exact) will likely understand the subtle references to heavy metal music that are in the game but that doesn’t take away any enjoyment from those who don’t care for The Metal. Although being a bit of Metalhead does help.

Graphics & Design: Like I said before, the world in which Eddie now finds himself in resembles gothic and fantasy inspired album cover-art used by many Rock and Metal musicians during the heyday of the 70’s and 80’s. Tim Schafer (the game’s creator) has credited the work of painter and Rock and Metal album cover/comic book/movie poster artist Frank Frazetta. After taking a look at some of his work, I really must say that it is fantastic, if you happen to like that sort of thing.

Whether it is the mythical beasts, the hoard of Hellish demons or the dark and Gothic landscape, the art style of Brutal Legend really draws the player into its world. Every background and character design is beautifully detailed and is definitely the equivalent of an epic album cover coming to life! It might not be the most realistic but it is definitely one of the more creative art designs and overall best looking games on the 360 by far.

Sound: Now this is what I’m talking about! Brutal Legend probably has the best “licensed-property” soundtrack that isn’t from a Rock Band game ever! I mean, with a solid 70 plus track list featuring artists like Motorhead, Black Sabbath, Ozzy Osbourne, Judas Priest, Lita Ford, Iron Madien, Megadeth and DragonForce just to name a few, how could this soundtrack not kick ass?

I should also note that Brutal Legend has an amazing cast who lent their talents to the game. Of course I have already mentioned the game’s star (and key selling point) Jack Black. There are also key characters played by Heavy Metal icons, Lemmy (Motorhead), Lita Ford, Rob Halford (Judas Priest) and of course “The prince of fucking darkness” Ozzy Osbourne as the Guardian of Metal.

(Tenacious D will travel through time and space to rock this house again!)

The game also has a fine group of Hollywood actors and comedians lending their voices to it. They include, Black’s Tenacious D bandmate Kyle Gass, Tim Curry (who is just awesome as Doviculus), David Cross, Steve Agee, Brian Posehn and Wil Wheaton. 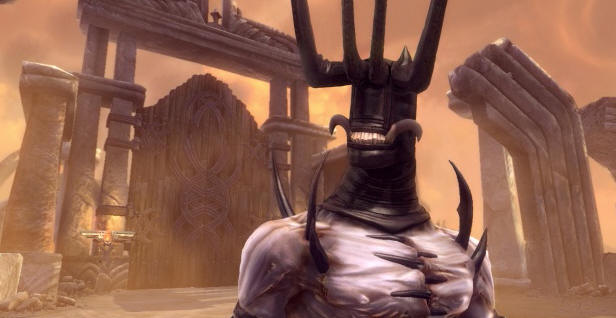 Normally I don’t list off the voice actors of the games I review but this time I’m more than willing to make an exception. This is one of the best voice casts any video game has ever had and I think they all deserve a round of applause for their great work.

But no Sebastian Bach? Come on now. The dude is hilarious. Well, one of the Head Bangers sounds like him. So close enough I guess.

Gameplay: I really have to say that I respect Schafer’s artistic vision. Sure, his writing and design choices are always top notch but the fact that he tried to incorporate so many different gameplay elements and styles into Brutal Legend is rather ballsy from a design point of view. Did it pay off beautifully or was it an unplayable clusterfuck?

Brutal Legend can be best described as a highbred of hack and slash, real-time strategy and driving games, with a slight hint of first person shooter (this would be the shooter side-quests). I wouldn’t say that the incorporations of each of these elements have the most depth but they definitely have near perfect controls.

The real-time and hack and slash elements tend to go hand and hand. The main levels in the game will pit Eddie’s forces against the army of Doviculus. Both sides will have a stage and the objective is to destroy the enemy stage in order to complete the level, while protecting your own stage at the same time. In order to do this, you are going to need to get some support from “fans” (spirits) in order to summon some more troops and update your stage. You do this by building Merch Booths at certain spots close to your stage. The more fans you manage to draw into the booths, the more troops you’ll be able to call into the battlefield. 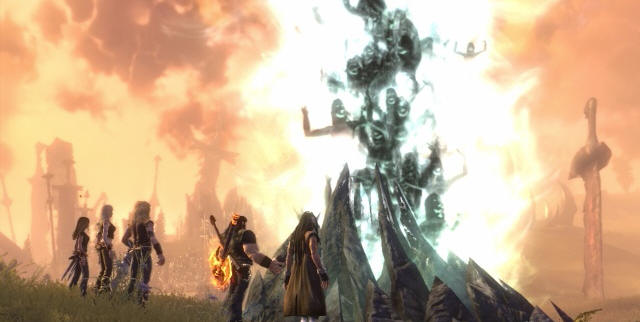 Once you have your troops on the field, you can divide them up and have them defend any chosen (like say the stage and the Merch Booths) spot and of course you can call them in to attack the enemy hordes as well as the boss’s stage. But Eddie isn’t merely in the role of general. Eddie will also be taking it to the enemy forces with a slew of hack and slash combos with his mighty axe or blasting them away with his guitar. 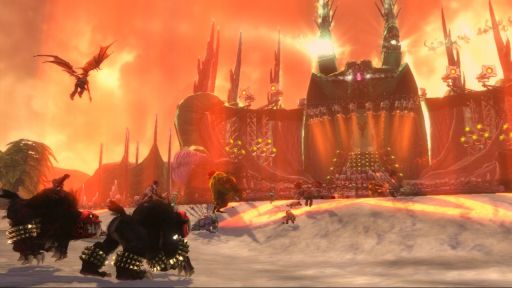 Speaking of which, Eddie can also perform a variety of Guitar solos that can either perform special attacks, rally up troops to certain positions or be used to used to summon your car and digging up ancient relics. 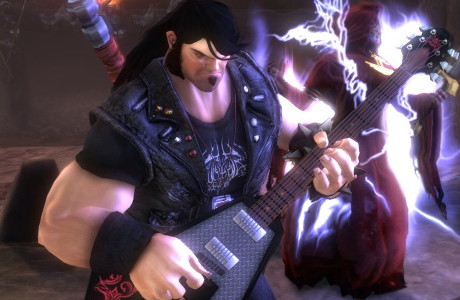 There are also a few driving missions in which you will have to drive around shooting at and plowing through enemies to protect your allies, as you travel through the world. You will also have to drive around to get to each of the main missions and side-quests. Driving related side-quests will either involve shooting away at enemies from a first-person perspective or racing against a trash talking demon. The shooting missions control fairly well but it can take a few too many shots before you actually kill anything. As far as the racing quests go, well again it controls well enough but they can be incredibly frustrating because you have to follow a beam of light to the finish line. This wouldn’t be too bad except the light changes direction constantly and when it does, it only gives you a split second to react. This is a huge pain in the ass, especially when making sharp turns. So, you’ll likely have to play these levels so often that you’ll know where to go without having to follow the light. This could have been avoided if the track layout was conveniently on the side of the screen. And considering that the car has weapons, it would have been nice to see some elements of car combat to keep things fresh. Other side-quests usually just have you and your troops ambushing enemy forces.

After completing the main missions and side-quests, you will be given a certain amount of Fire Tributes, which can be used to buy upgrades for your guitar, axe, car and home base. You can even use them to buy new combos and guitar solos, so it is a good idea to complete a few side-quests as you play through the main game.

Each of the different gameplay elements may be used in their most basic forms but they all control very well. My problem is that they can feel overly repetitive and the difficulty can feel a bit unfair at the end of the game with a seemingly never ending barrage of enemies and mission objectives that are just a little to vague (I must have spent 2-3 hours trying to figure how to beat the last two levels). The side-quests are also very repetitive and feel like you’re playing the same mission countless times. Considering that the main game is only 8-10 hours long, it seems that they had to add a vast amount of side missions to double the gameplay time but with them being so repetitive, it just feels like they had to stuff the game with some extra padding.

But even with its flaws, Brutal Legend is still a blast to play for those first few hours up until the completion of the main quest.

Extra Features: Brutal Legend doesn’t offer too much in terms of extra content but you can get some nifty little items during your play through. Throughout the game you can unlock new pieces of concept art, as well as new songs that are available for your listening pleasure anytime you are driving around in Deuce (the car). There is also the option to bleep out the game’s swearing. In a comedic twist, with this option on, every time Eddie swears, a Parents Music Resource Center "Parental Advisory" label will cover his mouth.

Replay Value: Again, the main quest offers up 8-10 hours of gameplay, which isn’t too much for a game that was originally in the $60-70 price range. Sure the main quest only offers up half of the gameplay time but the side-quests get really repetitive really fast. But the game itself is definitely charming and solid enough for replays when the time comes.

For what it is, Brutal Legend is a fantastic game, with some beautiful design work, clever writing and solid gameplay, but there really isn’t enough content there (well that isn’t padding anyway) that would make it worth the price of a new copy of the latest gaming blockbuster but it is definitely worthy of being a first class bargain title. If Double Fine decides to make this a franchise, there is a world of potential in making a mind-blowing sequel that would be more than worth the price of admission.

Until next time: Happy Haunting!

Next on the docket: Part one of a look back at the original Castlevania Trilogy.