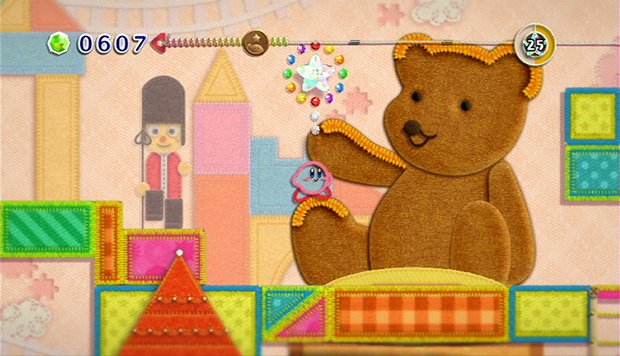 The dreamy music that's likely to illicit warm feelings, the tender and nostalgic voice of the storybook narrator, the endearing patchwork style that works its way into nearly every part of the game – Kirby's Epic Yarn has detonated an atom bomb of adorable, and the only victims are our throats sore from making baby voices and cooing “Aww!” sounds. The stitched-together framework of the game never allows you to become complacent in your fawning, and will reveal nuances in its style throughout your entire adventure in its magical yarn-created land.

But you already knew that. You only have to look at a screenshot (like the ones found in this review) and be assurred that the game looks great in motion – and it does – to realize that this game was made to hit creamy centers and melt cold hearts. What you do need to know is that the art style isn't just a coat of paint; Kirby has curbed his morbid eating habits for the sake of delivering a game that's a little different than what we've come to expect from him.

Rather than mimic his enemies after eating them, Kirby carries a whip that he uses to create balls of yarn out of his enemies, swing on buttons, and undo zippers to open up new paths. Sure, there are other ways getting these mechanics through to the player, but within the insane world of the game, everything makes sense, and it solidifies the entire world to know how everything will work as soon as you encounter it. The platforming isn't revolutionary, but it's solid, and as you stroll through the forests, deserts, and UFO's of this lovely world, looking for collectables in every nook and cranny, you'll face twists on the yarn gimmick that will make it seem less and less like a gimmick.

Kirby's yarn form also lets him adapt himself into several other forms. This includes more basic things like turning into a car to dash, a parachute to float, and a submarine to swim. But when the game decides to change things up, though, it can include sections of the game where you're a tank, a UFO, a dolphin, or a space ship, each with a unique gameplay twist. They don't all work as well as they should, but they do let the art style explore different gameplay styles, and it livens up the platforming, assuming you're bored of the regular game.

And for some of the more “hardcore” audience, boredom is certainly a possibility. The game's basic difficulty style errs on the side of letting you get through the level no matter what. You can't fail a level, even boss levels, so no matter what, you'll make it to the end of the game as long as you keep at it long enough. The only penalty of death is a loss of beads, and the only difficult thing you're going to be doing is trying to get a gold medal on every level and complete the challenge levels. At times, the whole experience can feel a bit insubstantial.

But for the collector, some of the challenges levels, getting through a level relatively unscathed, and finding every secret object can get fairly difficult – especially considering the lack of checkpoints in levels — so it's nice to have a variable challenge without resorting to changing numbers in the enemy's favor. Side activities, such as collecting objects to decorate an apartment and getting new tenants to live there, along with a co-op that can get chaotic quickly, also allow the obsessive to extend the life of the game.

Kirby's Epic Yarn prefers that you sight-see its creative design and appealing artistry than face a challenge that could possibly turn you away from seeing everything it has to offer. Even so, it's an entertaining walk in a beautiful park that will not only make you feel warm inside, but also augment any lazy Sunday perfectly, something very few games today can lay claim to.