Vanquish's unnecessary score screen perfectly sums up what kind of game it's trying to be: one that doesn't just want the player to advance through its levels, enemies, and bosses, but to excel at it. Death carries a harsh, 1000-point penalty, and the sluggish player gets no time bonus. Like in most games that score you, the actual scoring aspect serves no clear purpose other than to encourage or humiliate the player. For me, it was mostly the latter.

The game's clock will tell you it took me just under six hours to beat the entire game, but I'm pretty sure all of my failed attempts would add up to about another hour or so. The bosses require split-second timing and on-your-feet thinking; the regular Russian robots can kill you in one or two hit up close, as can several other enemies and story scenarios. Fortunately, if you don't think you're up to the challenge, there are more than enough difficulty options to accommodate you, even as far as making the actual aiming and shooting near-automatic.

So yes, this is a third-person shooter in the vein of Gears of War, but this is Platinum Games (formerly Capcom's Clover Studio), and they're not known for complacency. They've added some key tweaks to formula, and they serve to alter the Vanquish's gameplay just enough to distinguish it from the average “Gears clone.” Front-and-center are the thigh-mounted boosters that allow the game's main character, Sam Gideon, to slide around the battlefield and preposterous speeds, given the amount of friction he's likely to encounter by doing as much. Platinum's version of Gears' “Roadie Run,” these bursts of speed are central to the game. They seem like a flash-over-substance thing, but it's a guilty sort of fun, and you'll quickly find yourself sliding everywhere, at almost every possible moment.

The other big tweak you've likely seen before: AR (Augmented Reality) Mode, the ability to slow down time, giving you an upper hand against some of the more agile enemies. For a limited time, you'll be able recover from risky situations, picking the now-harmless enemies off, and even shooting bullets and missiles out of the air, if need be. Managing the meter than comes with this feature will be another important factor in your strategy, as exhausting this meter completely results in overheating, meaning about fifteen seconds of downtime and decreased mobility should you fail to use your meter frugally. 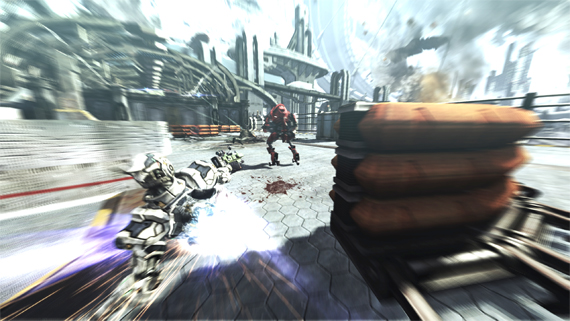 Vanquish definitely looks great, and is likely the craziest shooter you'll play in a long time.

But more likely than not, you'll fail, and you'll spend a lot of time overheating, since the AR Mode, the aforementioned thrusters and even melee attacks share the same meter. A melee attack will deplete the bar completely, meaning that you can't go overboard sliding around from enemy to enemy, punching them in the robot face. Additionally, any time you're in danger of dying – indicated by the customary reddened screen – your AR will kick in automatically, until your entire meter is drained.

Both of these seem like like unnecessary constrictions, and they hinder the amount of fun you can have for the sake of difficulty. I'd argue that boosting should not have a meter, that melee attacks have a cool down, and that the AR mode be the only thing that depletes the meter, but that's just a layman’s opinion. That, on top of some control issues – pressing X to get into cover is fine, but having to press A to roll then aim with the left trigger to initiate AR, never mind trying to boost while in AR mode with the left bumper is restricting – and an gun-upgrading mechanic that requires you to pick up the same weapon while full on ammo seem like last-minute additions for the worse.

All of these twists, for better or worse, all suffer from a lackluster campaign. There a few setpieces like fighting on a collapsing bridge or under an enormous Russian war machine, as well as hiding from spotlights while taking them out on moving trolley, but it's mostly a matter of killing everyone in your way, and it's disappointing to see such interesting design decisions go to waste. And the less said about the story and voice acting, the better.

Like its main character's state-of-the-art suit, Vanquish is teeming with style, as well as more than enough substance to see you through its medium-length campaign. But there are a few important problems from keeping it from being the powerful shot of adrenaline that it should be. Still, provided you can stomach the 60 dollars for a campaign relatively lacking in replayability and a fair amount of challenge levels, you could do much worse than this. With most of its issues weeded out, Vanquish could easily rise to the level of or possibly above its obvious template.