Hello there, my fellow Bitmobbers and welcome to the final chapter in this year’s For What it’s Worth Halloween celebration. Rest assured that the bad jokes and lame horror anthology references will soon be over. But first prepare yourselves for the grand finale. This is the review for Dracula’s Curse. 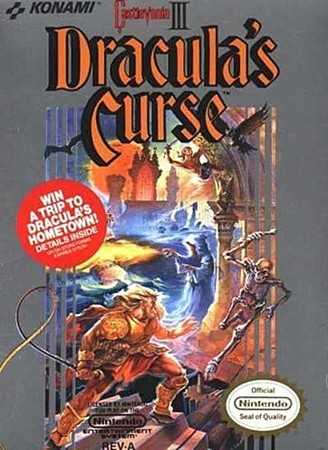 Story: As it turns out, Simon was not the first member of the Belmont clan to tangle with the Count. This game is set in 1476, which is actually about 200 years before the first two games, technically making this a prequel. This time around, Dracula threatens to conquer all of Europe. In an effort to fight back, the Church calls in the services of the once exiled Belmont family of demon slayers to help free the land of Dracula’s tyranny. Trevor Belmont is chosen to storm Dracula’s castle and take him out single handed. Although that isn’t how things work out but more on that later.

For an NES game, this is a pretty good plot and I like how the opening prologue is done in that old film-reel like style, which adds a cinematic feel that was rarely seen in games at the time. Oh and that open cutscene with Trevor just before he enters the castle is just marvelous. 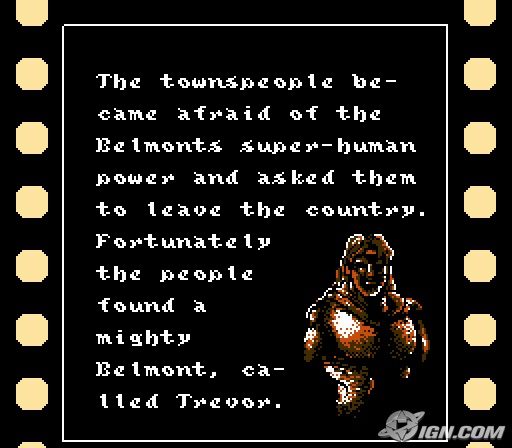 Graphics & Design: The graphics look fantastic and are a big improvement over the past two entries in the series. The backgrounds and character models are given a higher level of detail. We see things like a rundown cemetery with shattered tombstones, animals lurking in the shadows, we even see how certain parts of the castle are suffering from ware and tare. But one of favorite backgrounds would have to be the part where you are climbing the staircase in the first level. The arrays of church style stain-glass windows are beautiful to look at and are really very well crafted considering they are in 8-bit. The monsters look scarier and more threatening, and Trevor looks more human like than Simon did.

The developers even added some cool effects, like lightning in the background, zombies rising from the grave, eyes peeking out of trees, a swinging pendulum featured and Simon’s cape flapping in the breeze. 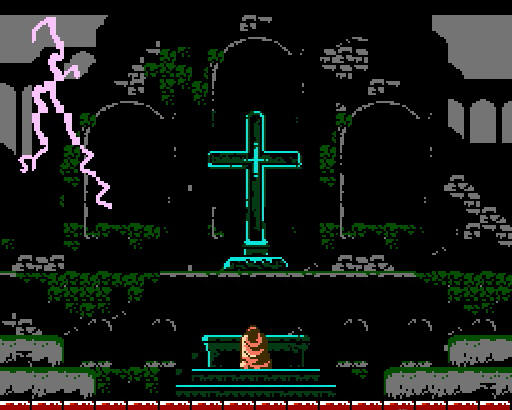 In short, Dracula’s Curse is one of the best looking games ever produced for the NES.

Sound: Much like the first Castlevania, the soundtrack for Dracula’s Curse is stellar from start to finish and it bares repeating that 8-Bit music is a capable scene setter and can perfectly fit the game’s atmosphere and story. Need proof of this soundtrack’s awesomeness? Click here.

Gameplay: Castlevania 3 serves an interesting mesh of gameplay elements taken from the first two games. The levels are in the same linear platforming style from the first game and the candles, extra weapons, hearts as ammo and pork chops are back as well, so no need to wander around aimlessly to look for clues or to buy overly expensive items. And of course like in the first game, the majority of levels take part in Castle Dracula.

However, this doesn’t mean that Konami didn’t take any cues from Castlevania 2: Simon’s Quest. The outdoor levels from Simon’s Quest make a return. Players will get to explore woodland areas, a rundown cemetery and the castle grounds. The password system also returns, although it is a Hell of a lot better this time around. No numbers or characters, all you have to do is enter in just a few simple symbols. Easy to remember, which is good because this game has 15 tough as nails levels that are going to kill you at every turn. The game also features a free roaming aspect. Well, sort of. At certain points in the game, players will come across a fork in the road and they will be given the choice between two different levels, which will lead to different locals.  Definitely a good fit for the series. 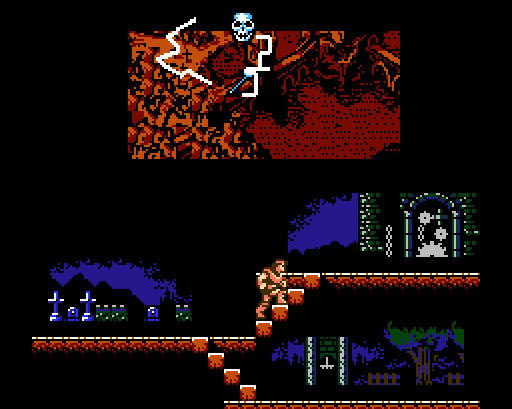 (Choose your own adventure)

Even though it took ideas from the first two games, it shouldn’t be said that Dracula’s Curse didn’t have any innovations of it’s own. This was the first entry in the series to have multiple playable characters. During your journey, will come across three other characters who you can invite to join your party. The pirate Grant DaNasty who can climbs walls and change his direction in mid-jump. Sypha Belnades, a priestess who can use elemental magic. And how could I forget about Dracula’s son, Alucard who can turn into a bat and shoot out fireballs. Each of these characters add something unique to the gameplay experience and their abilities come in handy in rough spots. Characters can even be tagged in at anytime with a simple push of the Select button. 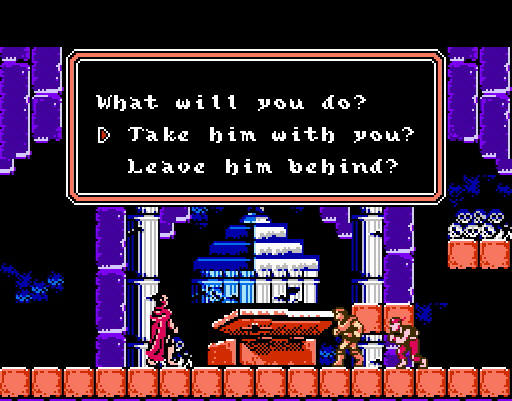 (Ummm. Should we trust this guy?) 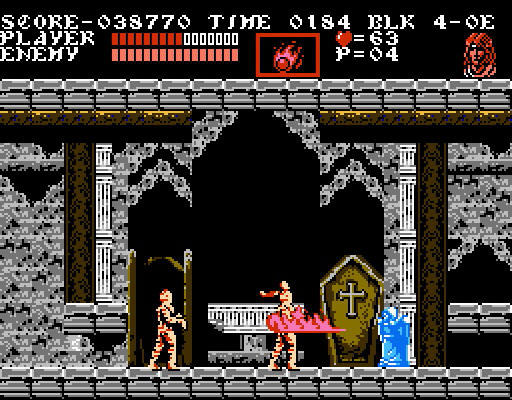 I would say that I like this one better than the first Castlevania but I can’t. Why? Because it is too damn hard. The developers decided to up the challenge on this one with more irritating enemies that can deliver massive damage, fly/bounce all over the (I really hate those fucking owls man) place and traps and pitfalls everywhere you turn around. This game delivers one hell of a challenge and is a real adrenaline rush but when you add in the fact that Trevor jumps back after getting hit, I feel a bit overwhelmed sometimes while I play and even get angry. I mean wanting to put my fist through the monitor angry. But it is still a great game, it’s just really frustrating as well.

Replay Value: Castlevania 3 sports the same addictive gameplay seen in the original, while at the same adding some new gameplay elements and characters and even makes a few improvements. However, it can get incredibly hard and will kick your ass. A lot. For me it has the same nostalgia factor as the first game and even though it does offer some solid improvements over the first two games, I personally like the first one better. Mainly because it’s easier but both games are definitely well worth their download price.

Actually, rather than recommending Wii owners to download the first and thrid games on the Virtual Console, I will instead advise them to find the Konami Collector’s Series for the PC. It has the all three games in the original Castlevania trilogy and the first two Contra games. I was able to find it for $15 and it was more than worth every penny. Although, I would advise you to have some kind of joystick because trying to play Castlevania while using a keyboard is bit annoying. 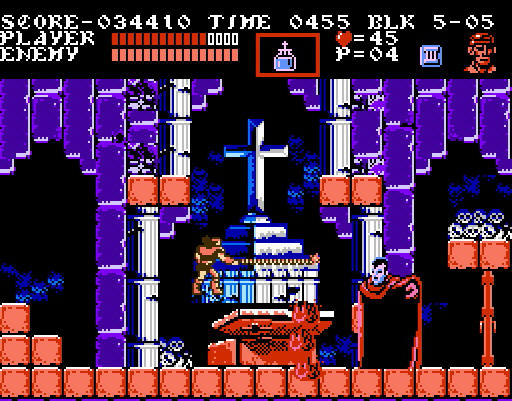 What’s this? It seems that I have left an extra little trick or treat style surprise for you. Consider it a special little bonus review. 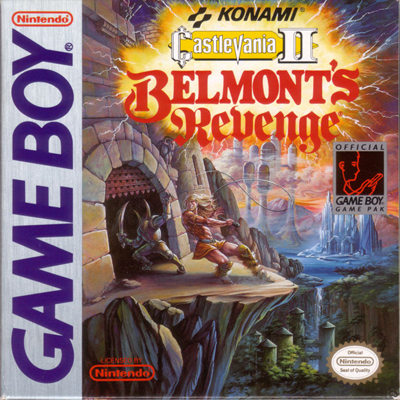 Story: Like Dracula’s Curse this is another prequel to the main series. This time you take on the role of Christopher Belmont (another of Simon’s ancestors), who’s son (Soleiyu) has been kidnapped by Dracula, during his coming of age feast. Soleiyu is transformed into a demon and is taken away to Dracula’s castle. Christopher must storm the castle to save his and Transylvania. Not a bad plot. Nothing to say other than that.

Graphics & Design: The game looks really good. Not quite as good as the NES games but still very good considering it is on Game Boy. The levels are designed well and have that gothic and eerie atmosphere that the Castlevania series is none for. I also like the different variety of levels this time around with the four castles (cloud, crystal, rock and plant). I find that they give the game an additional otherworldly feeling. But I am a tad disappointed that the game doesn’t offer up many of the traditional monsters that we are used to seeing from the series. Sure we get bats, crows, skeletons and even a few grim reapers but mostly the creatures are more gothic in origin like gargoyles and goat like demons or are just plain weird like toad things that bounce around, giant bugs, spiders, giant rolling eye balls and reptile heads that shoot fireballs. These enemies aren’t bad but it would have been nice to see some of the more familiar monsters.

Since this is a classic black and yellow Game Boy title, I would recommend playing this on a Game Boy Color or Game Boy Advanced to brighten or darken things up a bit to your own personal preference.

Sound: Definitely not up to the series standards but it is an ok soundtrack by Game Boy standards. The music does a good job setting up the tone and atmosphere but doesn’t offer anything overly memorable. 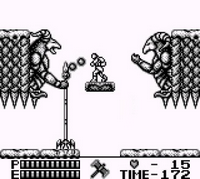 (Hey, kids. This is what handheld gaming used to look like)

Gameplay: This has the same style of gameplay as the first Castlevania game. You explore the castle as you whip various monsters and candles to collect addition weapons and ammo hearts but it isn’t to say that the game doesn’t have a few added twists. First of all it has a password system similar to Dracula’s Curse and it also has a Mega Man style set up where you can choose the order in which you want to play the levels that lead to Dracula’s Castle. You can choose between the Plant, Rock, Crystal and Cloud Castles at the beginning of the game. Once you clear through all four of them, you will move on to Dracula’s Castle, which consists of two level’s and the final boss fight with Dracula. The game plays well and is a good platformer for the Game Boy’s library but it lacks the difficulty of the games in the main series. You’ll find yourself breezing through the game up until the battles with Soleiyu and Dracula. They will repeatedly kick your ass. I mean I have only managed to beat Soleiyu twice and Dracula only once (when I was 10) and I can’t even remember how I did it. The difficulty is severely flawed. For it to go from 2-10 so quickly is a little frustrating. I am not all against a higher difficulty level but it should be gradual and fair. But even with the uneven difficulty, there is still some fun to be had here.

Replay Value: It provides a good bit of fun if you happen to be a Castlevania fan who wants to breeze through something on the go or are looking for  something with a little bit of that vampire killer nostalgia with the easier difficulty but it isn’t something you would likely see yourself playing countless times.