Welcome back to Game Diary: Civilization 5, the ongoing story of my first campaign in the latest edition of the infamously addictive Civilization series. Last time, I went through my third and fourth Golden Ages, completed the Tradition social policy branch, built a new city, and discovered a bunch of new technologies, amongst other things. I concluded with the prediction — based on recent conduct — that the Songhai were preparing to declare war on me. Bring it on.

Well, the Songhai didn’t declare war on me. I’m glad, though, for reasons soon to be revealed.

I received my first Musketman unit in 1775, as a gift from one of my city-state allies, Hanoi. The next turn they gave me access to their coal resource, which they had just completed mining. At the same time, I got my first frigate, a powerful naval unit.

In 1806, Thebes constructed a Public School, boosting its science output by 50%. This bumped the city’s (per turn) science output to 67 — more than four for each citizen. I may be new to Civ 5, but that’s a lot. I’m sure of it.

Then, in 1808, my civilization entered the Industrial Era, thanks to the discovery of Biology, which reveals oil and allows the construction of hospitals (that increase growth rates in cities). It looks like my people will have no shortage of oil, when the time comes that they actually need it. 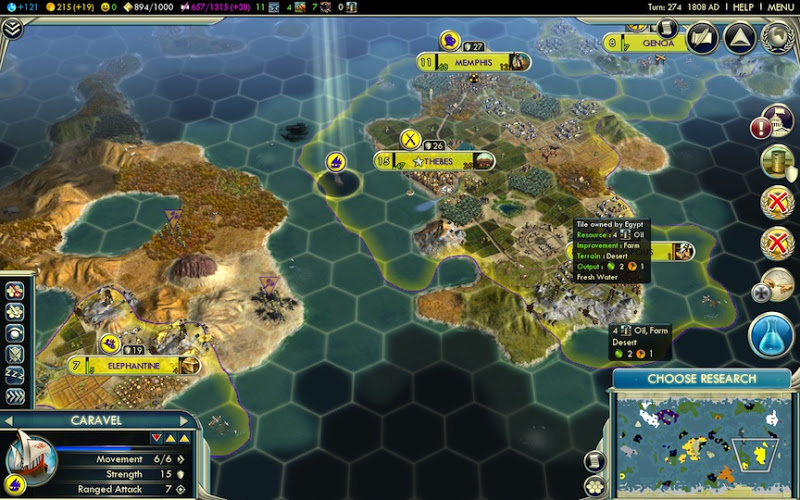 Oil. I have some.

This was followed immediately by the news that I have climbed to third in the List of People with the Pointiest Sticks, behind the Siam and Songhai civilizations. I take this as both good and bad news. On the one hand, it means I’m getting relatively powerful. But on the other, the two civilizations that are the biggest threat to my hopes of winning the game have bigger armies than me, which restricts my options in dealing with them.

In any event, I may be getting more powerful. Caesar came to me in 1818, asking for my assistance in a war against Greece. Amused at the reversal of the situation from Game Diary #4, I said I needed ten turns to prepare. This time I actually meant it — I had every intention of sending my forces up north for the war.

Before the ten turns came to an end, my scientists gave word they had discovered the secrets of Fertilizer, which gives a bonus of one food on every farmed tile that does not have access to fresh water. Most of my cities were built alongside rivers, so it won’t have much of an impact on my civilization, but it will surely help them grow a while longer.

The war started very, very badly. I lost two Knights and a Musketman to Alexander’s two Companion Cavalry units, in the space of just three turns. I needed to change my tack, so I grabbed my Frigate and Caravel. I would use them to soften up the Greeks as much as possible before landing any more units in their territory. 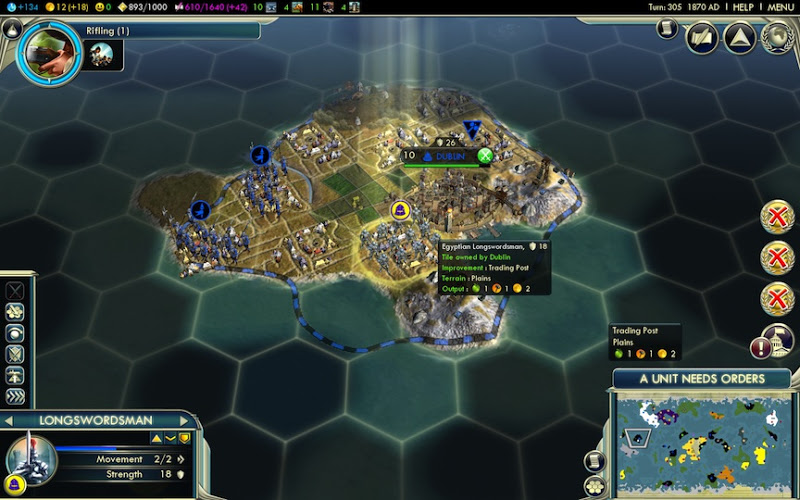 In the meantime, I needed to get some more land units ready — only one of the initial invasion force survived, and there was just one other in transit. The newly-forged friendship with the city-state of Dublin came in handy right away. They gave me a Longswordsman, which at that very moment was the strongest non-siege land unit available.

Alexander begged for peace, perhaps realizing that I was serious about this war, but I flatly refused. I’m glad I did, too, because the very next turn I completed research on the Rifling technology. I can now build Rifleman units, which are almost twice as powerful as Musketman. This war just got a whole lot easier. I promptly upgraded the Longswordsman to Rifleman, then sent the unit on its way to Greek territory. The Crossbowman that I had approaching from the east had to wait until I got some more money before also being upgraded.

I beg to differ. The point in continuing this conflict has something to do with you dying.

By 1884, I had two Rifleman units and one Musketman closing in on Greek territory, with one Lancer — an extremely powerful mounted unit — on stand-by just outside their borders, another Lancer en route from the homeland, and a Frigate and Caravel tormenting the Greek coastline. Much to my amusement, Alexander has a tendency to line his units up along the coast. It’s a great deterrent from the point of view of landing an invasion fleet, but an idiotic strategy under the current circumstances.

I have my two ships sitting just outside range of the Greek cities, picking off military units one by one. I’ve already destroyed two Companion Cavalry and three Hoplites, yet they don’t seem to be wising up to my tactics. The way this is going, I’ll end up landing my invasion force outside the Greek capital on an island bereft of Greek units. If I can get another Frigate up there to help out, this could wind up being a cake walk. Not that I’m complaining. 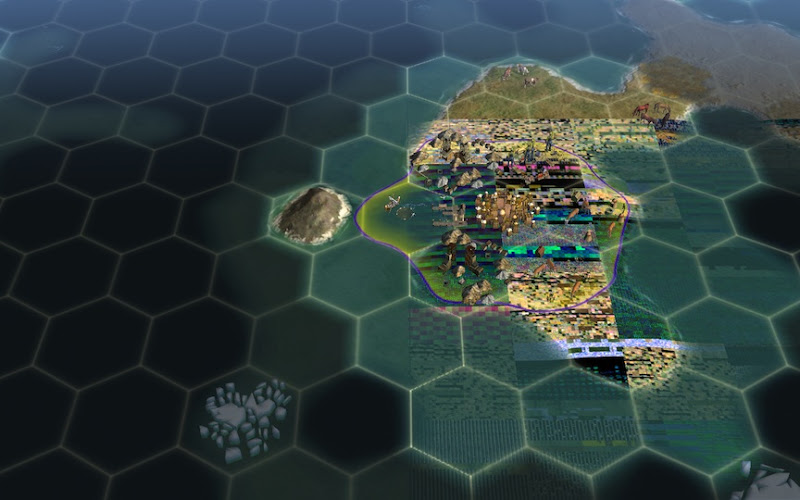 The graphical glitches are getting worse, and more frequent.