Welcome to For What it’s Worth, where bargain titles are examined to see if they really are worth your bottom dollar. Tonight is a real return to form here at For What it’s Worth. With Halloween over and done with, I can feel free to not write about games with supernatural themes to them. My first review with this new found sense of freedom is a game about a group of mutant turtles battling against a brain in a mech suit, a super ninja and their humanoid rhinoceros and warthog henchmen. This is TMNT 1989 The Classic Arcade Game for Xbox Live Arcade. 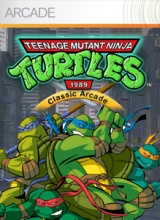 Story: The Teenage Mutant Ninja Turtles must rescue reporter April O’Neil and their ninjitsu trainer Master Splinter (who BTW is a radical rat) from the evil lord of the Foot Clan, The Shredder. What? This is a port from a 1980’s arcade machine. What did you expect? A strong, character-driven narrative. If you’re looking for that, you are in the wrong place. Now if you want vintage Saturday Morning fare, this may be the game you’re looking for. 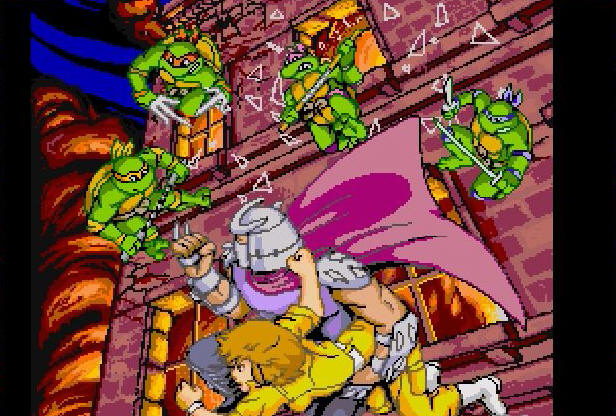 (These turtle boys don't cut him no slack!)

Graphics & Design: It looks exactly like the arcade game it is based on. No updated graphics, just some of best and most innovative graphics that 1989 to offer. Think 16-Bit but sharper and more polished. I mean this had better graphics than anything seen on home consoles like the NES and the Sega Master System and Genesis. That’s right kids. In the old days, some of the biggest innovations in terms of graphics and gameplay (4-player co-op anyone?) were proudly showcased in the arcade scene. 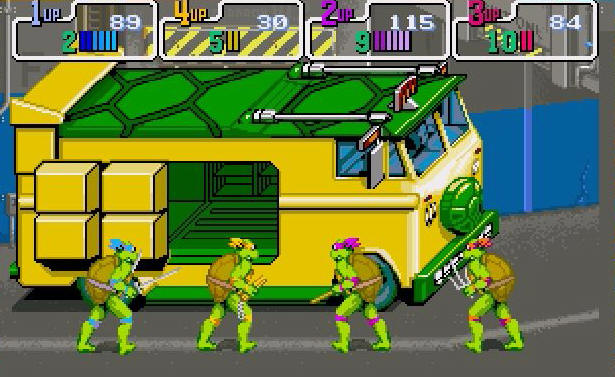 (To the Turtle Van!)

With that little history lesson out of the way, I really must say that the graphics are quite good. With backgrounds and character models being well detailed and animated and the game’s art style and cutscenes perfectly captures the essence of the animated series. But if you look at the Turtles closely, they are kinda blurry but that isn’t too much of a problem. 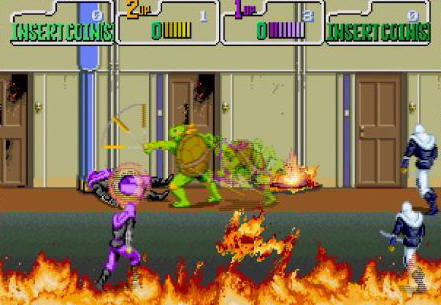 One last thing worth mentioning is that developers decided to use the character designs from the last TMNT movie and the newer games for the character selection screen, which is neat I suppose.

Sound: The soundtrack features each and everyone of the solid tunes you remember in their original arcade format, which suits this port just fine. The horrible voice acting from the arcade version is of course intact as well but you have to remember that hearing any voice in a video game back then was awesome. Even if it sounded like Microsoft SAM with a New York or Japanese accent. It doesn’t exactly age too well but it’s good for a few giggles and it does add to the game’s nostalgia. I also like how the voice acting was implemented into the gameplay. Like how the turtles talk when falling into a manhole or when the bosses talk smack before you fight them or how Shredder appears on a large TV screen in level 2 and says “Tonight I dine on Turtle Soup!” Now that was awesome. Too bad they couldn’t get James Avery or any of the other members of the cartoon’s voice cast to reprise their roles for this port. That would have been epic. 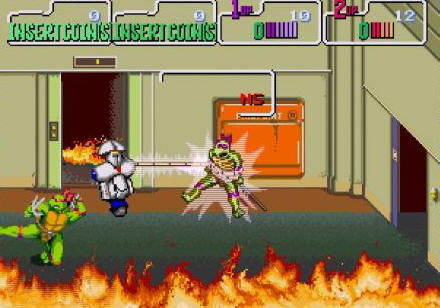 (Donatello is in for a real shock, thanks to this mouser)

The only real disappointment when it comes to sound is that the theme for the original TMNT animated series is nowhere to be found, except for the main menu but it only plays the last couple of lines rather than the entire song. That is weak.

Gameplay: What else is there to say about the gameplay other than it is your typical arcade beat’em up with drop in and drop out co-op that supports up to 4 players (both on and offline), unlimited continues and the uncanny ability to re-emerge in the exact spot you were killed? Not much really. I mean there isn’t a world of difference between the limited move sets (jump, kick, strike, throw) for each of the turtles, with the exception of the effectiveness of their weapons. And considering that this is an old school arcade title that was meant to suck every last quarter from your pocket, you are going to die a lot because of traps you don’t see coming, hoards of irritating enemies and overly strong bosses. 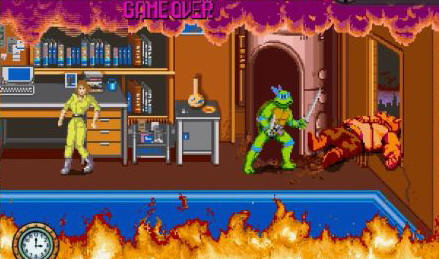 But that doesn’t mean the game isn’t fun. Beating the ever loving Hell out of the Foot Clan and squaring off against some of the biggest baddies in the TMNT rouges gallery (Be Bop, Rocksteady, Baxter Stalkman, Krang, Shredder) makes you feel amerced in the Turtles’ world.

Extra Features: Other than an online leaderboard, nothing. It’s a real shame to because this game really could have benefited from a few small editions, like maybe redefined versions of the two levels that were added to the NES version. I was a tad disappointed that the snowy Central Park level wasn’t in the game but there is still enough to keep the player satisfied for five bucks.

Replay Value: Although it can get frustrating during a single player campaign, it is still enjoyable but at the same time it is incredibly short (30-45 minutes tops). Whether it be local or online, this game was tailor made for multiplayer. This is where most of the replay value is going to come from. If you happen to have some friends over/who happen to be online who like beat’em ups, then turn this sucker on and have some fun breezing through it before moving on to something with a little more lasting power. I would say that TMNT 89 is good to have on hand during parties or in the case of single player, it is good to play every once in blue moon when boredom sets in and you want to kill sometime before your program comes on.

For old and new school Turtle fans or for those who like beat,em ups, this is a must buy. If you are new to the genre or haven’t even heard of the Teenage Mutant Ninja Turtles, then I would recommend downloading the trial first.  And to watch the classic TV series ASAP!