Previously, on Game Diary: Civilization 5, I agreed to join the Romans in a glorious war against the weak Greek civilization. Heavy early losses were turned around when my naval units arrived to torment the Greek coastline. Several Greek military units were quickly dispatched by my Frigate, while my reinforcements rapidly approached. As evidence of his profound weakness, Greek leader Alexander begged for peace — despite the complete absence of my troops in his territory. And my wise men discovered the secrets of Rifling, which cemented my civilization as a major military power.

I picked up my first Siege unit, a Cannon, as a gift from Hanoi. I’m looking forward to seeing it in action — bombarding cities with Frigates is better than War Chariots, but it’s still awfully slow. It’ll take a while, though, as the Cannon had quite a journey to make before it would be in the action.

Confident that my Frigate was keeping the Greeks busy, I landed a Rifleman and Lancer on an unpopulated region of snow near Knossos and Mycenae. Alexander immediately begged for peace, throwing everything he had on the table except his cities. I flatly refused.

Give me one good reason…

The next turn, in 1892, my Lancer attacked Mycenae. To my amazement, it destroyed roughly half the city’s defenses in just one hit. The attack triggered the birth of a new Great General, who I used to kick off my fifth Golden Age. I know that Golden Ages triggered by Great People get one turn shorter each time, but it seems way too easy to enter a Golden Age in Civ 5. I can remember far more Civ 4 campaigns where I had just one Golden Age than I can think of campaigns with multiple Golden Ages — despite being comfortably in the lead for many of them.

The Greeks stupidly tried to send out a Settler where my Rifleman had just landed. I destroyed the Hoplite escort and captured the Settler (which automatically became a Worker) without taking any damage. The Lancer attacking Mycenae then captured the city. I saw no value in occupation, so I clicked on one of the most enthusiastic buttons I’ve seen in the game: Raze the City! In an interesting departure from previous Civ games, razing a city takes multiple turns — one for each population — and can be cancelled before the city is burned to the ground. 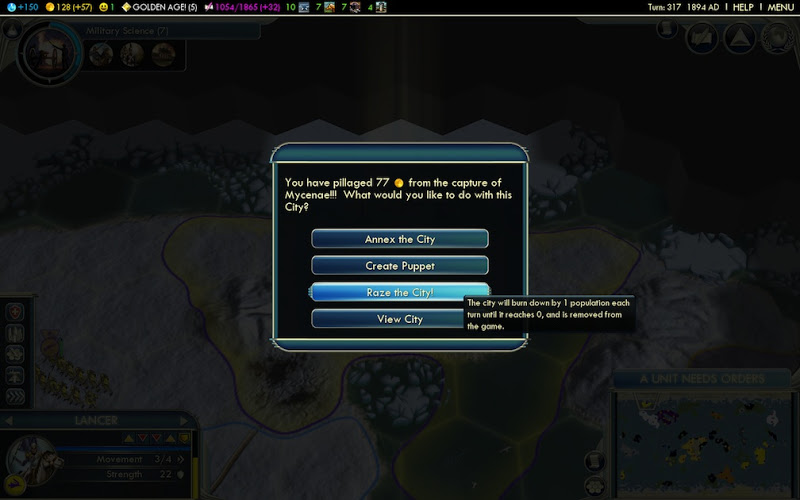 My science output got another big boost in 1900, with Thebes completing the National College wonder. The city now outputs 78 Science points per turn, which is just over half the national output. On the same turn, I finished construction of a new Frigate. Unfortunately, it’ll take at least nine turns to get it to Greece. I hope it doesn’t miss out on the fun.

By 1906, I had a major foothold in Greece. Both Knossos and Corinth were being bombarded — by a Frigate and Caravel, respectively. I had two Rifleman and a Lancer preparing to attack, with another Rifleman and a Cannon drawing near. The days looked numbered for Greece, with the Romans also pushing their borders back after capturing two of the smaller Greek cities.

Alexander came to me, desperate to broker a deal. Out of curiosity as much as anything else, I accepted a ten turn peace treaty. The terms of the deal meant that I now had control — if you would call it such — of Knossos and Corinth. I thought perhaps when you trade for a city the usual Annex/Create Puppet/Raze choices would be left out. After all, I’m not capturing the cities; they’re being given to me. My hopes were dashed when I saw the typical options come up, accompanied by a huge hit in my civilization’s happiness rating.

Happiness in Civ 5 is essential. If your civilization is unhappy, it loses productivity and cities stop growing. My civilization was now “VERY UNHAPPY.” And there was little I could do about it in the short term. You can build a courthouse in captured cities to eliminate the unhappiness caused by occupation, but first you have to wait for the resistance to end. The insane degree of unhappiness I faced meant that I would not be able to build a courthouse in a timely fashion after the resistance, either.

I quickly came to the conclusion that trying to keep both cities was not worth the trouble. I decided to raze Knossos to the ground, but have a go at keeping Corinth. This drastically reduced the unhappiness in my civilization, but nowhere near enough. I needed to build Theatres and Colosseums in every city to get things moving again. Production was severely hampered by the unhappiness, though, so it would take a while.

I did my best to get more luxury resources from other civs, which would give +5 happiness each. Then I crossed my fingers, hoping I hadn’t shot myself in the foot. 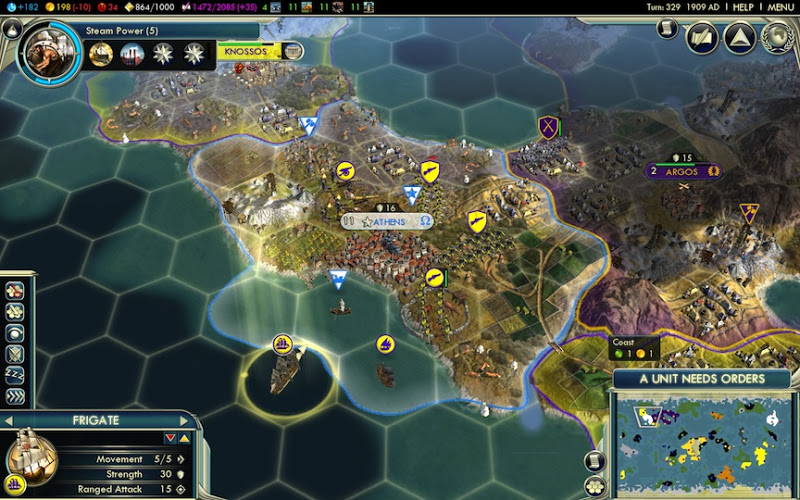 No-one can touch Athens unless I say so.

In the meantime, I formed a circle of units around the Greek capital. I wanted to make sure the Romans didn’t capture the city. Greece had just won itself a very powerful ally… for around ten turns (at which point I will turn into a powerful enemy).

My final action for the session was to get embroiled in a permanent war with a city-state. I wanted to forge some quick alliances, but I didn’t have any money. So I looked at what each city-state wanted. Two city-states wanted me to destroy Almaty. I checked to make sure no-one was protecting Almaty, since I didn’t want to trigger a war with another civilization, then, safe in the knowledge they were unaligned, I declared war on the city-state of Almaty.

Apparently I’m a bully and a warmonger. Almaty declared a state of permanent war on me because of my past transgressions — even though the only other city-state I have attacked is Genoa. The "Pious" Germans told me to stop bullying the city-states (or presumably they’d intervene). Why so touchy? 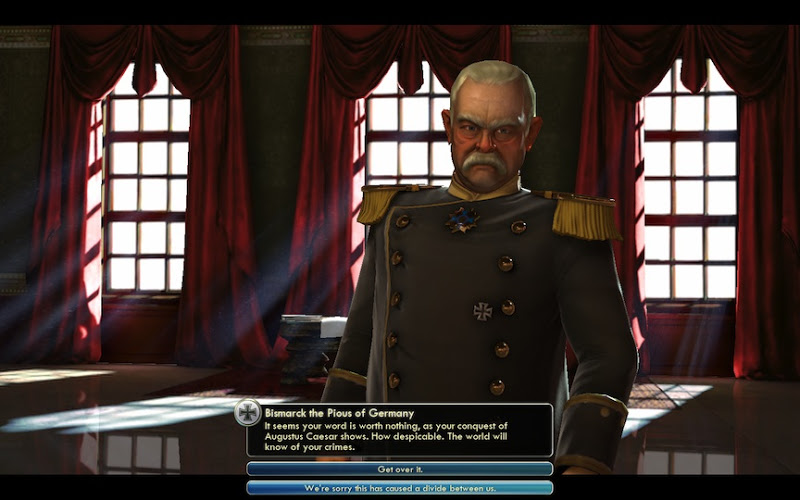 Um, I didn't actually do anything to Caesar except help him. Sanctimonious jerk.