Last time, on Game Diary: Civilization 5, I wiped out the Greek civilization before getting thrust into a war with every civilization and two-thirds of the city-states. My city to the south-east, Alexandria, was under heavy naval bombardment from the powerful Siamese civilization. The city-state of Genoa, which I controlled through a Puppet, was being set upon by a large Japanese invasion force. And the units I had left in Greece following the defeat of Alexander were storming through Roman territory.

My first Great Merchant was born in Heliopolis in 1947. This was great news, since the city-state of Brussels was requesting I produce one (so my friendship with Brussels could be rekindled). I also needed money, and a Great Merchant can get you lots of money when you perform a Trade Mission in a city-state. But with enemy units surrounding my homeland on all sides, it would be difficult to get the Great Merchant even the short distance to Hanoi. I resolved to go for it anyway — I really needed some money. 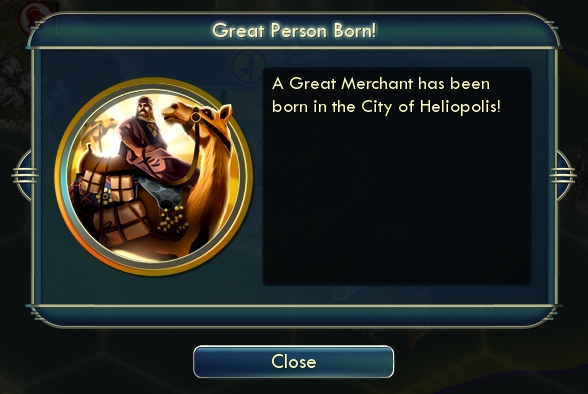 My chances of surviving this multi-front war increased considerably in 1949, with the long-overdue discovery of Replaceable Parts. I can now train Infantry, which are considerably stronger than Rifleman, Knight, and Lancer units. This should put me in a very commanding position on the Roman front, if nothing else.

My money troubles came to an accidental end in 1951. The Songhai beat me by just a handful of turns in constructing The Louvre, a World Wonder (which I was building mostly to gain favor with a city-state). I suddenly had enough money to start upgrading units. I began pulling units off the front lines to return to my territory, where they could be upgraded.

Three turns later, my Great Merchant arrived in Hanoi and my Artillery finished off the last of the Japanese invading force. I now had more money than I’d seen in the game up to this point, though it was sadly a mere fraction of what the Siamese had sitting idle in their treasury.

I upgraded my Caravel to Destroyer, (one of) my Rifleman to Infantry, and my Cannon to Artillery. More upgrades would come as soon as the units could get into my territory. 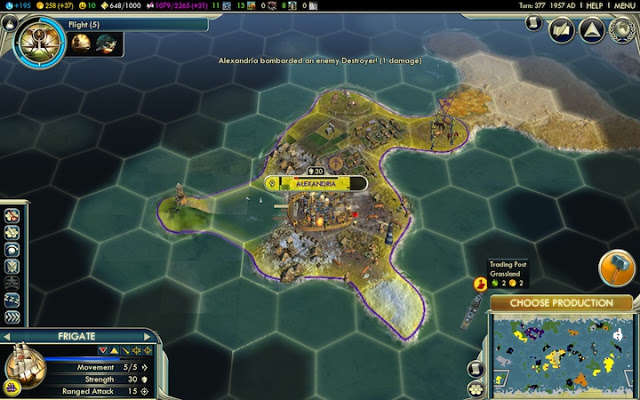 I do not understand why they didn't bring any land units to finish the job.

The long (and incredibly tense) naval blockade and bombardment of Alexandria finally ended in 1959, with the city and its garrisoned Crossbowman killing off the last of the Siamese Destroyers in attendance. This wasn’t the end of the troubles for Alexandria, though, as the Siamese sent two more (admittedly smaller) squadrons over the following ten turns.

Meanwhile, a newly built Destroyer and Artillery unit joined forces to bombard the nearby Iroquois city of Onondaga. The Iroquois are weak, with just two cities and obsolete technology. I figured they’d be easy pickings. Nothing has happened so far to suggest I was wrong.

A message flashed up on the screen in 1960 to tell me that the Siamese had entered the Future Era. I nearly panicked. This means they are significantly more advanced than I thought they were, which also means that they’re way more advanced than my civilization. I’m still making the transition from Industrial Era to Modern Era. I’m not liking my chances of winning the game — the Siamese seem to be too far ahead for me to catch up in a little over 100 turns. 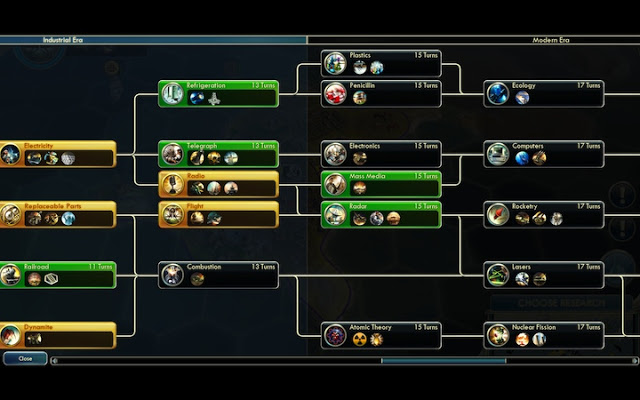 Those things in green are what I can research, while black is everything I can't currently research (and haven't yet discovered). The Future Era begins just off the right edge.

My civilization’s happiness was up to 12 in 1961. With the war taking up more resources than I’d care to admit, I decided to finally annex Genoa. Now I could decide what the city built and which resources it used, balancing production, gold, research, culture, and food output the way I want.

I discovered the potentially game-changing Flight technology in 1962, then picked up a new Great General in 1963. But I could not have predicted what would happen next.

Just as suddenly as the entire world declared war on me, the German, Japanese, and Siamese civilizations asked for peace treaties. Stunned, and a little overwhelmed by the multi-front war, I accepted.

The session ended on an appropriate cliffhanger. Onondaga, the Iroquois city, had been bombarded to breaking point, so I scrambled an Infantry unit in Memphis to (hopefully) finish it off. I captured Cumae in the war against the Romans, while the very same turn a majority of Caesar’s armed forces arrived off the coast of Corinth. They seem to be trying to flank me. And if they had stronger units, it just might work. (Instead, it’s likely to be nothing more than an annoying distraction from my steamrolling through their territory.) 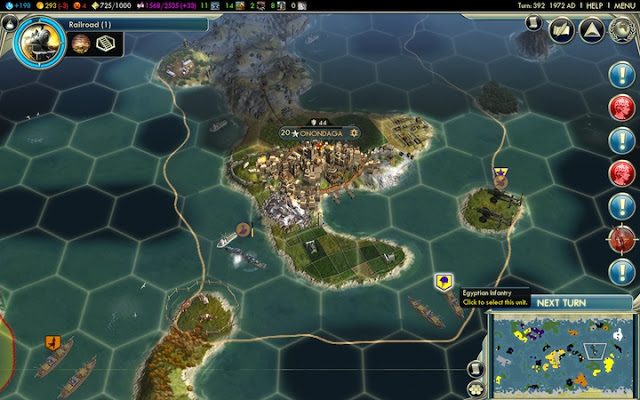 I do feel kind of bad wiping other civilizations off the planet. But these guys were asking for it.

At this point, my best hope of victory looks to be conquest. I never would have predicted that back when the game dropped me on a tiny island with few luxury or strategic resources.