Hello and welcome to Game Diary: Civilization 5, the ongoing story of my first campaign in the latest edition of the infamously addictive Civilization series. Today I continue the tale of war and intrigue in which I have become embroiled, with the story picking up precisely where Game Diary #10 left off.

The Romans are on the retreat, as my superior forces are decimating their homeland. Elsewhere, my Artillery has landed itself in a strategic position off the coast of the Iroquois capital. And the recently changed circumstances of war have given me the capacity to focus on destroying the two civilizations, free from bother from the powerful Siamese empire or the annoyingly persistent Japanese civilization.

In 1974, my Infantry captured the Iroquois capital, Onondaga. Two down, five to go. The capture gave my civilization access to Marble and Whale resources, prompting “We Love the King Day” — a brief growth bonus — in five of my cities. The other Iroquois city followed in 1983, so that now I have wiped two civilizations off the face of the planet. 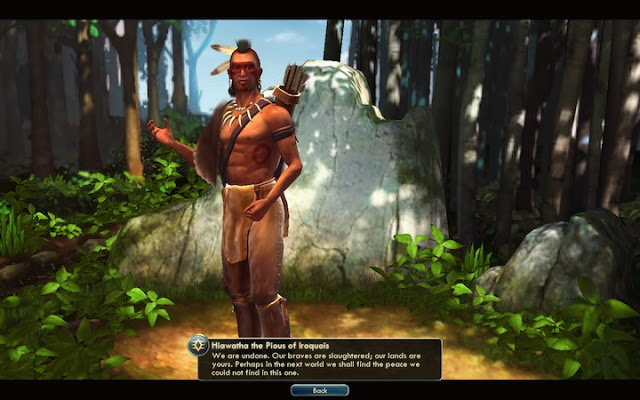 Why is everyone so nice and humble when they get annihilated? I'd be pissed.

I thought I might feel something about this seemingly heinous act, but the level of abstraction is so great that I have no sympathy for them whatsoever. The other leaders don’t act very realistically — or at least they haven’t with me — so I feel no compulsion to treat them with any sort of respect. I’m a bit sad about that — Civ 4 got me starting to feel; Civ 5’s foreign relations strike me as being two steps forward, three steps back. The Pact of Cooperation/Secrecy and city-states add a lot to the flavor, but so much subtlety appears to have been lost. Perhaps I’ll discover more depth on future campaigns. Perhaps it will come in an expansion. Either way, I want more intricacy and variety in foreign relations.

The Romans begged for peace, but had nothing to offer me. I had no interest in being merciful. I was concerned, albeit briefly, when they landed a Cavalry unit on the three-tile island east of Genoa. I feared they might be catching up on the technology race, which would make the fight drag on, but quickly figured out that the unit was a gift from their new ally, the city-state Helsinki.

I received another Great Merchant in 1982. A Trade Mission was promptly conducted in Hanoi, rekindling my alliance with the city-state (with the help of a small gift of 250 Gold). Now I could get a few extra units and resources. 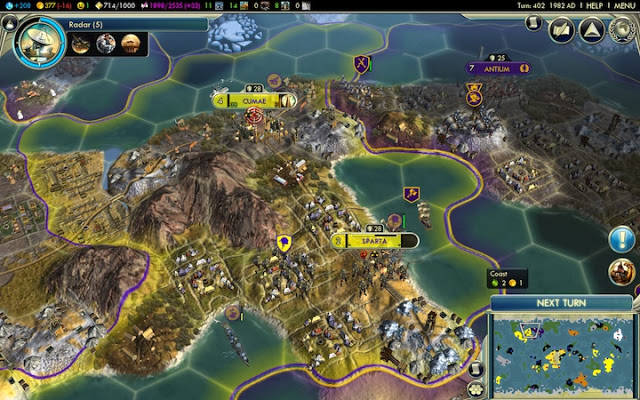 In the meantime, my Artillery/Destroyer/Infantry/Infantry combo stormed through Roman territory. I captured Sparta in 1982, installing a Puppet in order to gain access to a Silver resource. Ravenna fell in 1985, unceremoniously razed without second thought — it’s nothing personal, but I don’t want to get burdened with more unhappiness and exorbitant maintenance costs. Neapolis followed in 1990, then the big one — Rome — in 1994. Caesar lives, but his empire is in ruins. (And my money troubles are well and truly over.)

If I capture four more capitals, I win the game.

As the Roman campaign drew toward its natural conclusion, I began shifting all available combat units to the area near Tombouctu, a large Songhai city. I figure that if I can capture that city, it will be an easy launching point for an assault on their capital (which is shielded by land on one side and ice caps on the other). Leading this invasion force was a Destroyer, which made a start on bombarding the city while the others made their way down from former-Iroquois territory. Additional units, including a Fighter, were in production. 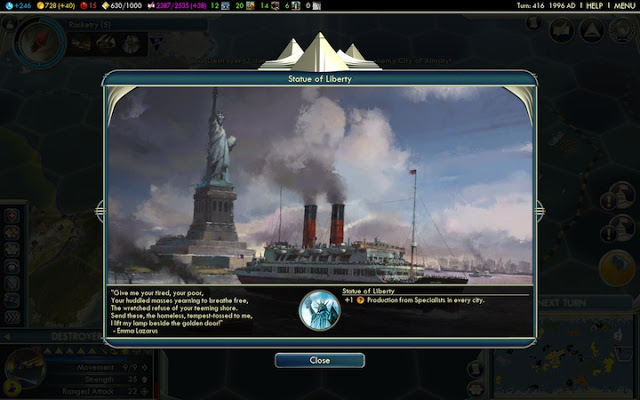 I demand to see this kind of detail in-engine. Actually, don't — my computer might explode.

Thanks to some help from a Great Engineer, I completed construction of the Statue of Liberty in Memphis in 1996. This World Wonder provides a +1 boost to production from Specialists within cities. In my case, it means that Memphis, Thebes, and Heliopolis all have noticeably improved production now.

The rapid expansion of my empire took its toll on my civilization’s happiness, so I decided to reverse my decision to keep Cumae. I annexed, then razed the city in one fell swoop.

1997 brought my first air unit, a Fighter. I immediately sent it to Elephantine, which was just close enough to Tombouctu for bombing runs. The final turn of the session saw me test out the Fighter’s potency. It tore into Tombouctu’s defences in a beautiful-yet-simple animation. Explosions are fun — I think I’m going to be seeing a lot of them between now and the end of the game. 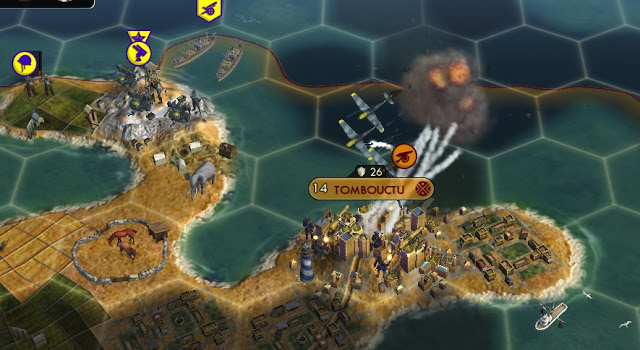 Not pictured — Tombouctu's health dropping to almost half as a result of the bombing run.

With around 80 turns remaining, I have no chance at a Cultural Victory; a Diplomatic Victory seems highly unlikely, due to the strength of the Siamese; a Scientific Victory is still up for grabs; a Time Victory, which goes to the civilization with the greatest points tally when time runs out, looks likely to go to the Siamese; and a Conquest Victory looks like a good possibility, if only I can figure out how to break through Ramkhamhaeng’s defences to capture the Siamese capital.

We’re on the home stretch — here’s hoping for an exciting finish.