Welcome to episode 12 of Game Diary: Civilization 5, the story of my first campaign in the latest entry of the long-running turn-based strategy series. Last time, I obliterated the Iroquois civilization and captured the Roman capital, while a long-running war with the Songhai finally kicked into gear when I bombarded one of their cities. I pushed hard to catch up to the Siamese, who hold a comfortable lead, and remarked upon my initial feelings about the new diplomacy system.

We’re closing in on the end-game today, and my hopes of victory hang in the balance. Can I tip the scales in my favor before the coming finish?

The siege of Tombouctu took four turns — in 2001, I captured the city and installed a Puppet. This gave me a great base from which I could stage an attack on the Songhai capital, Gao. 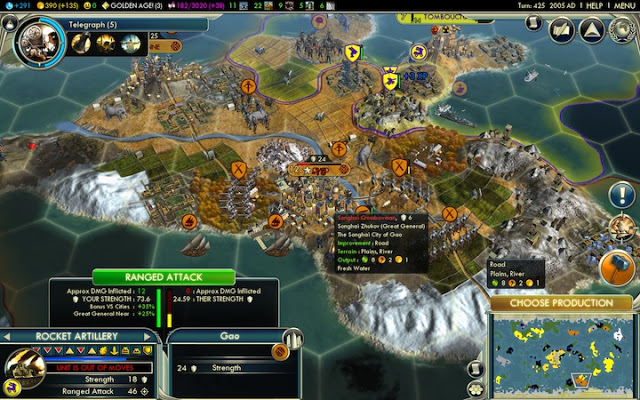 At the same time, my wise men discovered the secrets of Rocketry. I can now build the Rocket Artillery and Helicopter Gunship units, in addition to the Apollo Program, which begins the Space Race. I immediately upgraded both my Artillery units to the more powerful Rocket Artillery, and began construction of the Apollo Program in Thebes. A Space victory seems unlikely, given the limited time remaining, but I figure I might as well go for it.

This very busy year also brought a new social policy. Knowing that this is likely to be my last social policy, I took the selection very seriously — the right choice could give me an edge over Ramkhamhaeng, while the wrong one could spoil my chances of winning the game. I eventually settled on the Free Thought policy, which gives a +1 Science bonus to every Trading Post. I have more than a dozen Trading Posts spread across my empire, with a Library and University — both of which boost Science output — in nearly every city. Consequently, I picked up around twenty extra Science points per turn (with more to come as my conquest continues).

2003 brought yet another Great General — I’ve lost count of how many I have now had. Since I already had one in the field, and only the Songhai war-front had any use for a Great General’s combat bonus, I started a new Golden Age. Each Golden Age started by a Great Person lasts for one turn less than the previous such Golden Age. At this point, I get just five turns. But every turn counts when you’re staring down the barrel of defeat, so I’ll take whatever bonuses come my way.

One hit from my Rocket Artillery decimated Gao’s defences. Only a strong fight from the Songhai standing army, which included some eight units, and the delayed arrival of my first Paratrooper kept the city from falling in two turns. It didn’t take long, though, as my powerful modern weapons made light work of their long-obsolete muskets and crossbows. Gao fell in 2010, with its two Wonders — Himeji Castle and The Louvre — intact.

I need to capture three more capitals to win the game through conquest. 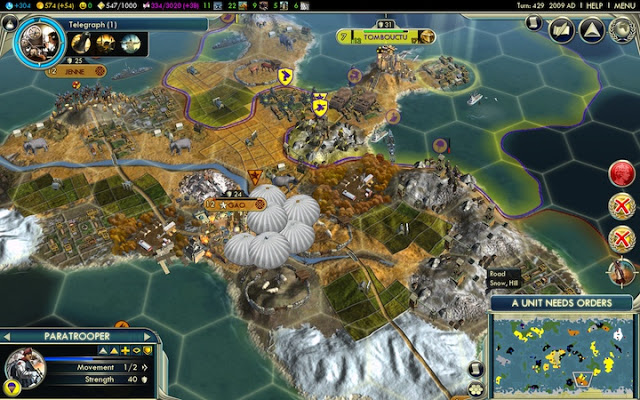 I think the Paratrooper is one of the coolest units in Civilization 5.

Meanwhile, the units still stationed on the Roman front pushed forward. In 2004, I captured Antium. The final Roman city, Arretium, will take some time to destroy, as it is difficult to reach by land and is unreachable by sea (actually, that’s not strictly true, as land units may approach from the opposing coast, but a Caravel protects such a maneuver).

I offered peace to the Songhai, to their stubborn refusal. So I decided to make their home island entirely mine, capturing and razing Jenne and Taghaza in just two turns. They still have a few cities left, but the Songhai empire is in ruins.

The situation now is more or less the same as it was at the end of Game Diary #11; I lack the money or influence to go after a Diplomatic Victory, have a decent chance at winning through conquest, am unlikely to win if the turns simply run out, and will try my best to get a Space Victory (but doubt I have enough time). The Siamese are formidable opponents, with advanced technology, seven city-state allies, a population that is double the size of mine, and a large treasury.

But if I play my cards right, I might just beat them. 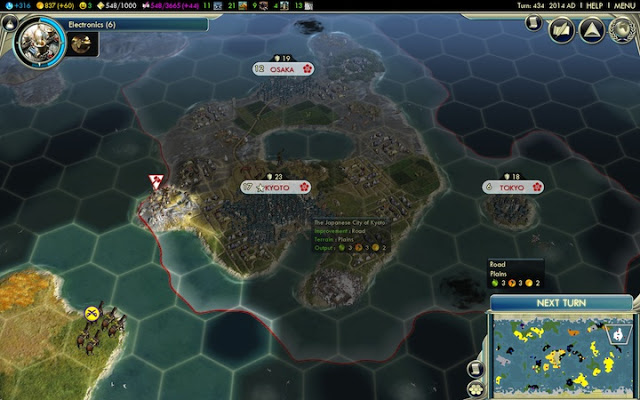 Quote of the day: “I once sent a dozen of my friends a telegram saying ‘flee at once — all is discovered.’ They all left town immediately.” -Mark Twain