Welcome back to Game Diary: Civilization 5, the story of my first campaign in the latest entry of Sid Meier’s beloved turn-based-strategy series. Last time, my long and drawn-out war with the city-state of Genoa took a turn for the better as one of my War Chariots received an important upgrade and a new Great General was born. While I struggled with a few of the changes made between Civ 4 and Civ 5, I entered my second Golden Age and discovered a source of iron on an isolated tile in the middle of the ocean, far from all civilization.

In a perplexing display of weakness, Caesar begged for peace. I had yet to commit to a new policy since declaring war on Rome at the behest of Greece. But the Romans were apparently very much afraid of me. They offered me four gold per turn for 30 turns, plus 120 gold upfront in exchange for a mere 10 turns of peace. I shouted at him, “Are you crazy!? I haven’t done anything yet!” But the offer still stood, so I figured I might as well take advantage of the situation. Maybe I’ll use some of the money to pay for the units I need to send way up north to fight Caesar’s armies. 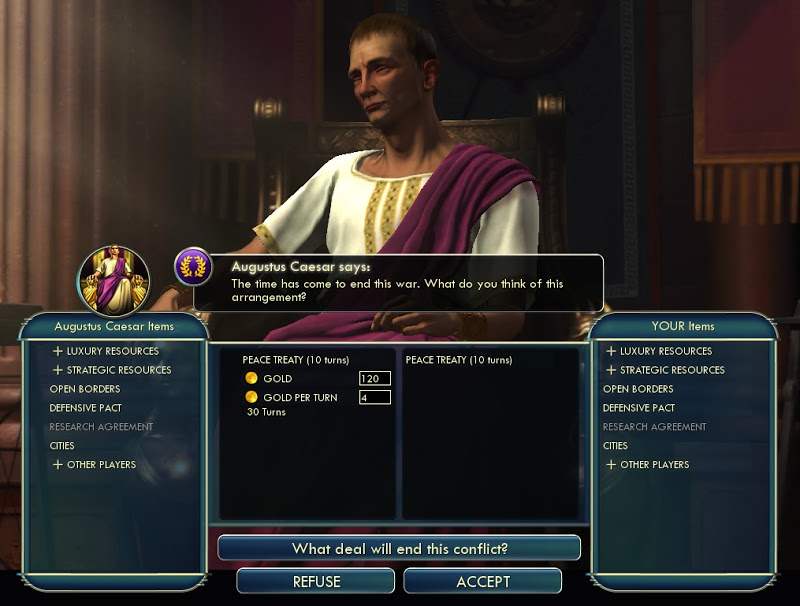 I think you've lost your mind, but… okay, I'll take your money while I get an army ready.

During the next turn, in 1220 AD, my courageous war chariots and spearman finally brought Genoa to its knees. It took around 2,000 years, but Genoa was finally mine — well, sort of. Tempted as I was to take full control of the city, I decided to install a puppet, which prevents a large hit on the people’s happiness and gives you all the benefits of owning the city — except you can’t control build orders. I may change my mind later, but for now this seems like the best option.

Apparently the city-state of Hanoi didn’t like Genoa, either. By destroyed their rival, I gained a new ally. As a result, I can move freely through the territory of Hanoi, and the city-state will give me a new military unit every 17 turns. Not a bad deal for a favor I didn’t realize I was performing. 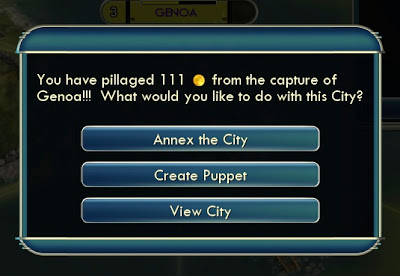 The city is mine.

Just then, the Greco-Roman intrigue got even more interesting, with Caesar asking me to sign a pact of secrecy against the Greeks. I figured turning on Alexander wasn't advantageous, so I responded with “How dare you!” The Romans will have to do something to make it worth my while before I switch sides in this non-conflict.

I met the Japanese civilization on the next turn in an uneventful encounter. I don’t think my relationship with Japan will remain cordial for long, though. Nobunaga gave me some bad vibes.

At this point, I decided to check on my progress for the first time. I was pleased to see that my civilization places second in most of the surveys taken. I’m trailing Ramkhamhaeng (of Siam) by 110 points, but I'm comfortably ahead of the rest. This is probably because of my recent success in the war against Genoa, in addition to a flurry of technological discoveries: I researched steel, banking, and engineering in the space of just six turns. 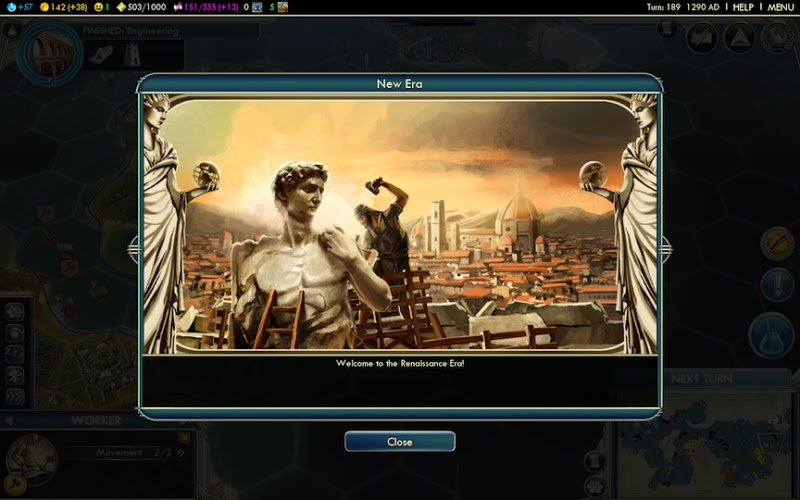 Quote of the session: “In the country of the blind, the one-eyed man is king.”