Hello and welcome to the penultimate episode of Game Diary: Civilization 5, the story of my first campaign in the latest edition of the infamously addictive turn-based-strategy series. Last time, I began work on the Apollo Program — in anticipation of the Space Race — and conquered the heart of the Songhai civilization. In so doing, I closed the gap between me and my rival for victory, Ramkhamhaeng (the Siamese leader).

Today I prepare for the grand finale, hustling for any edge I can gain over Ramkhamhaeng. Can I build on my momentum?

Having steered clear of Almaty since accidentally sparking a permanent war with the city-state some hundred years prior, I finally moved in to attack in 2016. My enemy is effectively Ramkhamhaeng’s friend, and I’d rather not risk a Siam-Almaty alliance. Almaty makes for a difficult capture, however, because it is surrounded entirely by water. Any attempts to make inroads must be made via naval, air, or amphibious assault.

The pathetic flame of the Roman empire was finally extinguished in 2018 — the turn in which I razed their last city, a small outpost town called Arretium. Caesar was slightly less courteous in defeat than Hiawatha (Iroquois) or Alexander (Greeks), but he still had the grace to congratulate me. The civility and respect with which defeated civilizations concede continues to baffle me. I didn’t just beat them at chess or table tennis; I annihilated their entire civilization, mercilessly razing some cities while forcing my rule upon others. To borrow a phrase from hip hop legends The Roots: “It don’t feel right.” 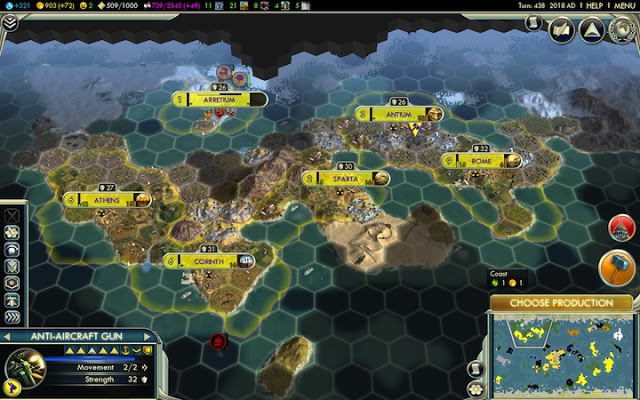 The remains of the Roman empire, which is now entirely under my control. (There used to be four more cities, but they were razed.)

I gained the secrets of Electronics in 2019; I can now build Mechanized Infantry (a fast and powerful armored unit). The Siamese, who, given the show of strength at their borders, appear to have discovered that technology long ago, completed construction of the Pentagon World Wonder in the same turn. They can now upgrade units at half the normal cost.

My navy became significantly more powerful when I built my first Battleship in 2020 — the same year in which I made peace with the remnants of the Songhai civilization. A second Battleship is on the way, which — together with the six Destroyers and one Carrier I already have — should give me a good chance of beating Siam in a late-game battle for naval supremacy.

Almaty fell two turns later. I expect the city — when it comes out of resistance — will make a significant contribution to my economy, as it has two fish resources and pearls.

For the ten-or-so turns leading up to this point, I had been amassing troops off the coast of Japan (in readiness for war). By 2023, I was satisfied that the invasion force was ready — I declared war, unperturbed by Tokugawa’s accusations of treachery. The Japanese capital, Kyoto, was captured that very turn. I need two more capital cities to win via conquest.

An unexpected bonus from capturing Kyoto came in the form of three World Wonders — the Taj Mahal, Colossus, and Great Lighthouse. My naval units now have one extra point on their sight and movement attributes. 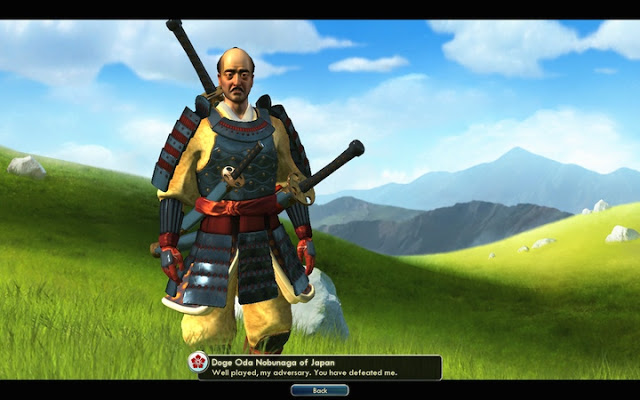 A more realistic outcome would be for him to fall on his sword while vowing his people would exact revenge upon me.

The good times kept on rolling, with my first Helicopter Gunship and the Mass Media technology arriving in 2024. I also set up a Puppet in Osaka, then razed Tokyo, in 2025. The Japanese have been annihilated, and, just like the leaders that lost before him, Oda Nobunaga showed a disturbing amount of grace. I cannot stress enough how disconnected this feels to me. We spent thousands of years antagonizing each other, and I displayed a deceitful duplicity every step of the way. They should be harping on about revenge and poetic justice, yet every leader seems willing to forget everything and congratulate me on a jolly good show. What gives?

Back to the campaign, I moved straight from Japan to Germany. It took four turns to get my units in position outside the German borders, but their two largest cities (one of which was the capital, Berlin) fell in half that time. The only German city remaining is the small port-town of Munich, which I won’t even bother attacking.

Only the Siamese capital stands between me and a Conquest Victory.

The capture of Berlin brought a remarkable seven World Wonders under my control — Notre Dame, the Sistine Chapel, Stonehenge, the Great Library, the Hanging Gardens, the Kremlin, and the Porcelain Tower are all mine. Some of these will have little or no use to me, but Notre Dame and the Hanging Gardens provide a +8 happiness boost (combined). This is important, because the large number of cities in my control that were captured from rivals puts a great strain on the happiness of my civilization. 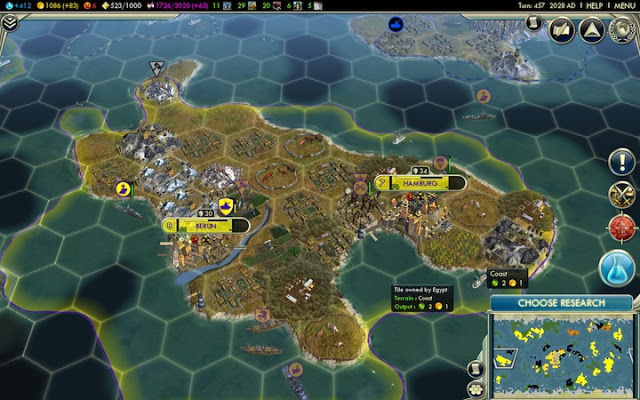 I felt kinda bad about capturing these cities — the Germans have been good to me for most of the campaign.

With 43 turns remaining, I have clawed my way into the lead. I trailed Ramkhamhaeng by around 600 points at one stage, but now lead him by 83. We’re in for a tense finish, as I have no doubt Ramkhamhaeng will declare war on me if I don’t declare war on him. Clearly, a Time Victory, in which the civilization with the highest score at 2050 wins, is now a very real possibility. But it’s not one that I’m considering; I want to win before time runs out. I have nearly completed the Apollo Program, which will kick off the Space Race. I suspect there are not enough turns remaining to build the spaceship, though. My improved money situation makes a Diplomatic Victory possible, if I can hang on to my three current city-state allies while swaying the rest of them to my favor. And finally, there is the option of winning through conquest.

The problem here is that the Siamese are more powerful than me. They have a huge population, more advanced technology (including something called the Giant Death Robot unit), and a large standing army. A well-timed, concentrated attack on their capital might work — and that’s certainly what I’m planning — but it remains a daunting task. Wish me luck. 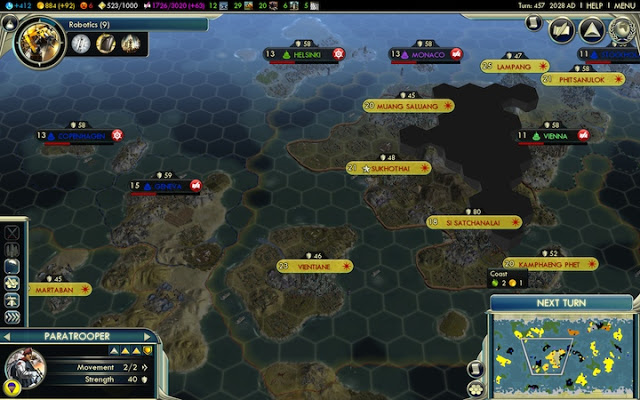 The Siamese sphere of influence. That's their capital just to the right of center.