The first time I plowed through over ninety ghosts after eating a series of power pellets – a fever dream made possible by Namco Generations’ revision of Pac-Man in Championship Edition DX – I wondered if there was some sort of historical context for why the huge grin was spread across my face. Perhaps years of being restrained by the limited amount of ghosts and pellets on the classic Pac-Man board gave me a greater appreciation of the fact that I was devouring entire haunted neighborhoods' worth of Inkys, Blinkys, Pinkys, and Clydes. Would I appreciate what was happening were this my first time playing Pac-Man?

You could conduct scientific studies to find out, but I'm willing to bet that that the simple idea of running around a maze at speeds approaching the sound barrier while racking up points in the hundred-thousands would appeal to most anyone. Namco Generations likely thought about this while implementing a “Free” mode, in which Pac-Man can run around with infinite lives and bombs (yes, bombs) around the maze unabated. It's a pick-up-and-play mode, meant for anyone with even the most casual of interests in the game, the one you'll have at all the Pac-Man parties you're likely to have from now on.

But there's more to Championship Edition DX than increased quantities of ghosts, pellets, and party modes. The fundamental goal is the same, but the structure is different; eat all the pellets, but do so through a set course on the maze . Only a part of the maze is filled with dots at a given time, and only eating the fruit or other reward at the end of the trail will reveal more. Sleeping ghosts now litter the path as well, and as soon as you cross them, you'll wake them up and make them follow you. Once you have a parade of them following you, you can eat a power pellet and trigger a ghost genocide (if they were alive to begin with). 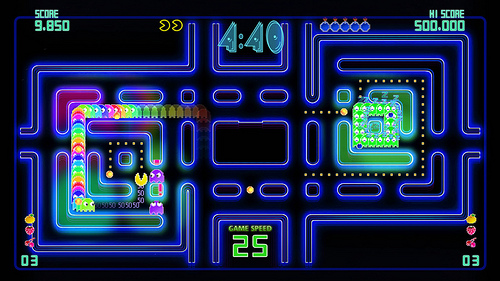 The courses offer a good variety in ghost-eating.

Other changes include a slow-down every time a ghost gets within fatal range, allowing you to more easily evade your pursuers, as well as the aforementioned bombs, which send any ghosts following you back into the cage they came from. They may feel like concessions to appeal to a wider market that make the game easier, but since the game becomes faster the longer it goes, at some point these two tools become essential to surviving.

At first, I thought that the new follow-the-path game was going to lose its appeal, since there are only so many ways to get back on the rails, but in this case, the game manages to keep this entertaining by changing the actual maze as time progress in certain modes. Additionally, there are nine mazes to play with, and each of those has time trials, five and ten-minute modes, Ghost Combo mode – go for the highest number of ghosts eaten during a single power pellet frenzy – as well a leaderboard that constantly compares you to every other player online, even going as far giving you a letter grade for each trial, mode, and maze.

Everything that Championship Edition DX does works to revitalize Pac-Man for a modern audience that wants faster, more powerful, better everything, but it doesn't lose the retro taste of simplicity; you're still playing a classic. DX will likely be the version you'll play from now on, though.