On November 21, 2005, I took a half-day at work.  I arrived at Best Buy just before 12:45 p.m. and would spend the next twenty hours or so waiting in the Ohio autumnal cold for my chance to be the first to experience the next generation of console gaming.  Fast forward five years and 37,000 G and I find myself wondering what type of celebration should be held for the 360. 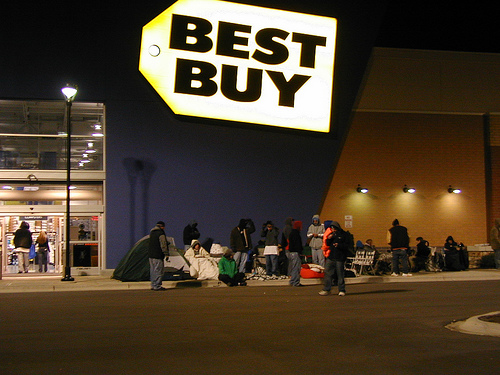 Simply put, the 360 has been the home of some of my purest gaming joys – a Gears curb stomp, a co-op expert run through the Endless Setlist 2 without pausing or failing, over 2,000 games spread amongst the Halo series including an RTS.  Unfortunately, the journey has not been one with a constant companion.  In fact, as we celebrate the fifth anniversary of the 360 launch, I am playing on my fourth console.  In an informal tally of some XBL forum friends, nine gamers reported twenty console failures.

I do not believe it hyperbole to say that the Xbox 360 has changed the face of gaming.  While certainly the original Xbox, in particular through efforts of Bungie and Halo 2, got things started, Xbox Live, with the new console’s hardware, really solidified an emerging community of gamers.  Friends lists, integration with Xbox.com, cross-game chat, the party system are but some of the features that have connected us beyond imagination.  For me, it is THE system seller, more than any single game or application.  Xbox Live, despite its pay for premium status, is the reason why after system crash number three, I did not hesitate to replace my Elite with a new 250 GB Slim.  Without it, I might as well be playing on a DS. 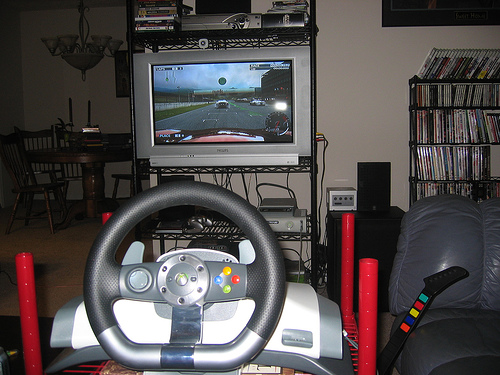 Of course, the 360 has had the games as well.  PGR3 was my system show piece at launch.  Its combination of graphic and audio excellence made even a casual viewer take note.  I fondly remember the releases of Ghost Recon: Advanced Warfighter and Fight Night, Round 3 and their distinct but equally effective approaches to utilizing the hardware.  The former used its complicated HUD to create the sensation of the future soldier, taking advantage of aerial drones controlled by the d-pad, to mark enemies and foes.  The latter eliminated artificial display altogether, making the player rely on visual cues as to each fighter’s condition.  And of course, there was Gears.  Had there been any question about whether we had moved beyond the PS2 and original Xbox, Gears was the answer.  It looked and played like a “next generation” game.  And I loved it.  There are others, some exclusive and others not, that have continued the solid run: Halos and Call of Duty, Bioshock and Mass Effect, Forza 3 and Crackdown.

The 360’s use of achievements shifted how some of us, myself included played games.  Admittedly it was not always for the best, for example playing the easiest song on expert drums at 100% in Rock Band for 10 G or whatever, but at its best, the prospect of achievements led me to finish games that I might not have finished, explored areas of the game or tried new weapons that I otherwise would have ignored.  Achievements can guide and affect how we approach a game in positive ways that did not exist prior to the 360.

Another feature that the 360 made a part of everyday gaming life again has a bit two-sided appeal – downloadable content.  Yes, there was the dreaded horse armor and other nickel and diming content paid for in Microsoft’s own magic currency.  But the 360 could add to the life of a game with additional content, new maps or weekly downloadable songs, new racetracks and the cars with which we could drive.

Even better than the DLC for existing games was the introduction of the Xbox Live Arcade.  From day one, XBLA offered quality at a value.  Originals and remakes both proved effective and addictive.  I have devoted hours upon hours on Geometry Wars, Rez HD, Catan, UNO, Limbo, Castle Crashers and Braid to name a few.  On a number of occasions, I remember being overwhelmed by the XBLA options and just not having enough time for things like Penny Arcade, Trials HD, Shadow Complex, Bionic Commando.

Despite the devotion and adoration, I still find myself in such position where I cannot fully recommend the console to a friend.  At least not without a cautionary word of what may possibly lie ahead in the console’s future.  Yes, today is a celebration of the fifth anniversary of the 360 launch, but here’s my timeline of note: 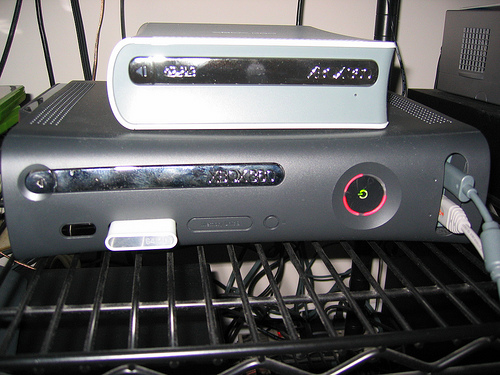 Sheer numbers total $1,600 worth of consoles.  I actually was grateful to have purchased the Best Buy Product Service Plan on the launch box.  It meant only paying $150 for the Elite upgrade.  I did spend the $79.99 to guarantee the Elite for two years and luckily so.  I did have to up the full $300 for the Slim having run past the two-year PSP on Elite #2.  They are not stellar numbers and we are right to expect more from our consoles.  It is no small amount of money. 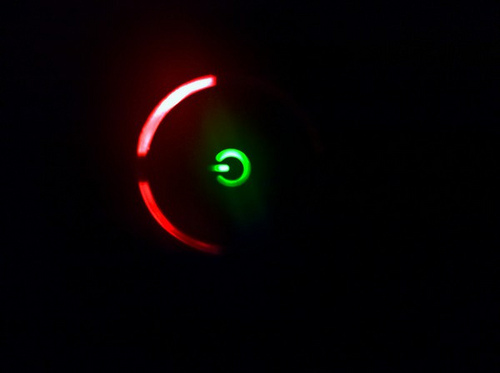 It is with this background that today is somewhat bittersweet.  At this point, I cannot imagine my gaming life without the 360.  The console has been at its center since that cold November morning five years ago.  Sadly, when I play Geometry Wars to commemorate the occasion, it will be on my fourth console.