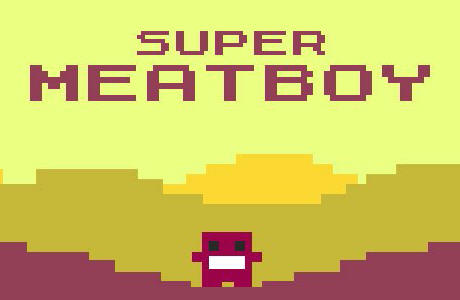 Tonight I am serving up a hearty helping of some hard meat that is so very tough to beat. Ummmm (he said while gripping his control….seductively) ummmm. This is Super Meat Boy.

Most gamers may have only recently become familiar with this loveable little squared patty but this is actually Meat Boy’s second outing. The character originated from a Newgrounds flash game simply titled Meat Boy, which first hit the Internet in October of 2008. The game quickly became popular and with that popularity came the creation of Team Meat and a sequel that would become hit on both Xbox Live Arcade and Steam. That sequel is of course Super Meat Boy.

Meat Boy has certainly risen through the ranks in the video game landscape but does that mean he has become a Grade A cut?

What's the story? Well, Meat Boy love’s a cute little piece of adhesive strip named Bandage Girl and in turn, the cottony bit of fluff and scabs loves him to. 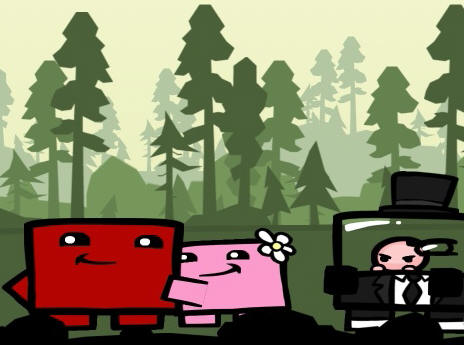 However, their love catches the attention of the loveless Dr. Fetus (a baby in a rather dapper mechsuit complete with monocle and top hat) who absconds away with Bandage Girl in a jealous rage. Meat Boy’s mission is to make it through the evil Doctor’s various death traps to come to his fair maiden’s rescue. This is actually very similar to the premise of Super Mario Bros. except Mario didn’t have to jump through giant buzz saws, while dodging heat-seeking missiles.


The graphical and design work for Super Meat boy can be best described as a fantastic trip in the WABAC Machine and by that I mean we get just about all of the gaming nostalgia a hardcore retro nerd could ask for. We get adorably twisted and hilarious cutscenes inspired by some classics of gaming’s past. Trust me on this. They will have you laughing out loud even after repeated viewings. Plus, they're hand drawn, which makes them even more charming. Not too mention, the gameplay sports some good old fashioned 8-bit (possibly Atari era) inspired sprites and level designs.

The designs for the game are based on that old school sense of minimalism, in which objects and characters barely look like what they're actually supposed to be. Chapters such as the woodland and dilapidated industrial areas barley look as they are supposed to, but they have a fine coat of polish on them which gives them an old school appeal with some added HD flavor. There are even some nice subtle touches like animals frolicking in the background.

The game also offers up a great a wonderous variety in terms of level design. For example, there are levels in which the only colors used are white and blue or black and purple, which looks good but it has a way of messing with your eyes. There are also the retro inspired warp zone levels, which look and feel more like Atari, NES and even Game Boy games. And perhaps the weirdest of all, the negative zone levels which are basically modelled after NES games when they are suffering from glitches, which are I happen to really enjoy on both a visual and gameplay level….even if I haven't cleared any of them yet.

As for the design of Meat Boy himself, I must say that I like his transition from 4-bit to 8-bit to current gen sprite to hand drawn cartoon. He really is a cute and charming little character and I especially like the subtle touches like the blood trail he leaves behind him as he runs and sticks to walls. Team Meat even leaves these traces of him around the level. Even if he is killed. So if you were to play a level again after being killed, the blood trail from your previous life would be intact. However, his sprite could have been a bit bigger. When the screen is cluttered with enemies and death traps, it can be hard to keep track of such a small pixel. It might just be me but I did get a few small headaches because of it as well. 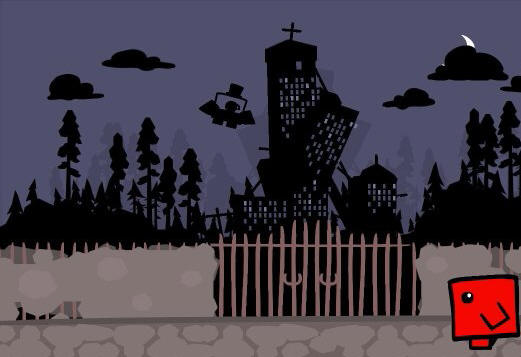 Now the music on the other hand is a different story. The score of the game does share many things in common with games of the 8 and 16-bit eras in the sense that the songs are not too long and contain plenty of loops and repetition but the tracks were composed with modern tech to give it a more new school sound. The end result is nothing short of fantastic. Whether you jumping through saw blades in The Woods or jumping over dirty syringes in The Hospital or even sliding on walls in the depths of Hell, the music is stellar and it really helps get the blood pumping when you are making your way through the game. I should also note that the music and sound effects of the warp zone levels are 100% old school 8-bit and match the look and feel of those levels perfectly. One last thing I should mention is that I really love the sound effects used when Meat Boy is running, sliding and splattering. It really does sound like a creature made of meat is running amok.

Just like every other aspect of the game, Super Meat Boy’s gameplay shares the same sense of old-school simplicity. The mechanics are basic and pretty easy to learn, since Meat Boy only has a few basic moves in his arsenal, like running (his speed actually seems like it could rival Sonic’s), jumping and he can also do a wall jump move (like Mario). Meat Boy uses these moves to navigate his way through incredibly short levels (some of which are a single screen) to reach Bandage Girl (sadly Dr. Fetus takes her away each time) at the end. You might think that this sounds easy. Sunday stroll easy. Cake walk easy.

Well guess what? This game is going to kick your ass repeatedly, until you beg for mercy. Yes, the levels are short but they can contain such things as saw blades that surround every corner (which make for some very narrow jumps), heat seeking missiles, which follow your every move and an array of unnameable sprites that attack you or block your path, and that's just for starters.

Avoiding this constant barrage of death traps is going to take precise platforming and it's really going to challenge your speed and reflexes, so you better have a good understanding of the gameplay mechanics. Luckily the first couple of worlds are fairly easy and allow the player some time to get comfortable with the controls but once you enter The Salt Factory, all Hell breaks loose. The obstacles become more deviously placed and the enemy sprites become much fiercer and Meat Boy himself becomes a real problem. What do I mean by that? Well since he is a slippery little bugger, this causes him to slide down walls too quickly or mess up jumps or slide into obstacles if you happen to hold the X button to long or put slightly too much force on the thumbstick. But I guess the developers did this on purpose as part of his character design, so I can’t complain too much about it but it does add a fair bit of frustration. From that point on you are going to die a lot and I mean a lot. So much so in fact that the game becomes a constant test of patience and sanity.  And if you think the Daytime levels are hard, just wait until you unlock their Dark World equivalents. They are damn near impossible. It’s a good thing that you have infinite lives. 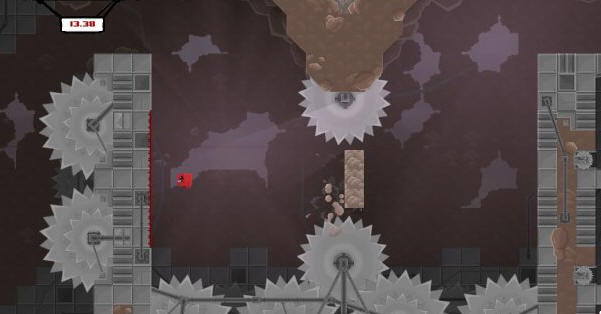 
Certain levels had me cursing up a storm because I was dying so often. Here are few examples of the frustration I was feeling: “Shit!” “Fuck!” “God damn!” and my personal favorite “Why can’t these level designs give me a friggin break?”

Although some harsh words have been said and many F-Bombs were dropped, I really can’t say I hate this game. Yes it's frustrating as all Hell but there is a real sense of enjoyment to be felt while trying to conquer each level and you get a real sense of accomplishment when completing a particularly hard level. The challenge does seem unfairly tacked on at times but it isn’t so much so that completing the level is totally impossible. It just requires a lot of practice. In fact, I would say that this level of challenge actually makes the game quite addictive and really adds a good sense of excitement and tension as you’re playing each level. 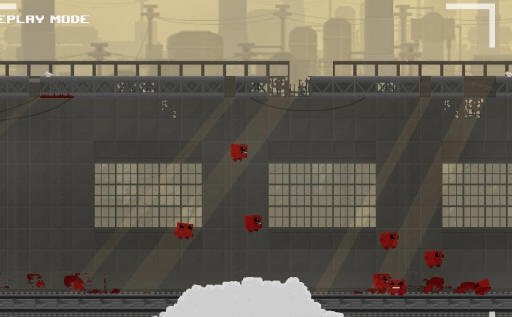 Super Meat Boy also provides a good selection of secret characters that can either be unlocked by completing certain warp zone levels or by collecting bandages that are hidden throughout the game. The real neat thing about some of these characters is that they are actually characters from various indie games and have their own special abilities. For instance, you have Tim from Braid who can rewind time, Commander Video from Bit.Trip Runner who can float for a short distance and even The Kid from I Want to be the Guy who can do a double jump, just to name a few.

(Can you collect them all?)

I don’t know how they all play just yet since I have only been able to unlock Commander Video, Gish (from Gish), Ogmo (from Jumper) and the Flywrench (from Flywrench). These characters can come in handy at certain points but most of the time I found that because of his speed and ability to stick/slide to the wall, Meat Boy is the way to go. Although I will say that CV hover ability is neat but he’s too slow. Gish can stick to the wall without sliding which can be useful but I do find that jumping is kind of tricky with him. The Flywrench is actually my favorite. It has the ability to triple jump and slide down and even up walls (and quickly I might add) but it falls pretty quickly after the third jump, so time is jumps carefully. Playing as these characters actually makes me want to download their games and give them a shot.

After completing all of the Daytime worlds, a new world called Cotton Alley becomes unlocked. I don’t want to say anything about it other than that it is the Super Princess Peach scenario done right and that it's the hardest world in the game by far.

Speaking of extra features, the fine fellows at Team Meat will be providing plenty of extra levels via the free TEH INTERNETS world map (unlocked after collecting 20 bandages. At least, that's how I think I did it). There will also be a new 20 level chapter for Gish that will also be free. So keep an eye out for that. Although it should be said that you have to be logged in to Xbox Live in order to play it. 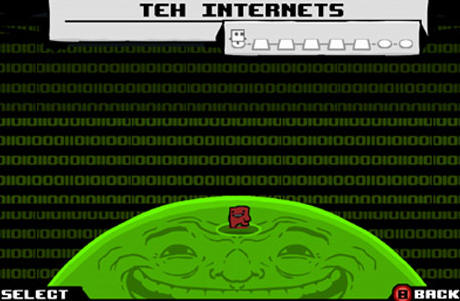 (Behold the glory of TEH Internets! Behold it!)

You know what? It may be hard as Hell and I may have shouted many random curse words, as I contemplated breaking my controller, but with its solid gameplay and adorable/twisted sense of humor, it was just too charming to put down. Super Meat Boy truly is a cut of Grade A beef!

Now if you’ll excuse me, I have some bonus content to explore.