Hello and welcome to the finale of Game Diary: CIvilization 5. For those of you who came late, this is the story of my first campaign in the latest edition of Sid Meier’s turn-based strategy series. You can read through the previous entries for the full story, but here’s the quick version: Choosing the middle difficulty setting (Prince) and normal game length, I was randomly assigned the Archipelago map type and Egyptian civilization. 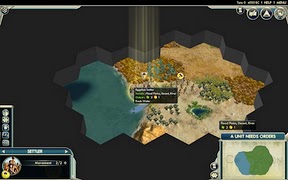 I began on a small island, with few strategic or luxury resources, and immediately felt fenced-in by the appearance of clouds on low graphics settings. I managed to squeeze three cities onto my small home island, while I was left waiting for over a millennia to explore the wider world. I encountered my first taste of combat from the rampaging Barbarians, while I prematurely declared war on the nearby city-state of Genoa. It would take around two thousand years for me to capture Genoa, which finally capitulated in Game Diary #5.

My weak civilization was growing in strength, so when the opportunity for war against the Greeks came in the early nineteenth century I jumped at the chance. Despite a few gross errors in judgement, I eliminated the Greek civilization in 1927. Then the whole world declared war on me.

Disappointingly weak AI choices resulted in my Egyptian civilization growing in strength and size, capturing and conquering every rival civilization except for the intimidatingly large Siamese civilization. Coming in to this final Game Diary, there are 43 turns remaining and only the Space Victory, Time Victory, and Domination Victory options seem viable. But first I must clash with my rival superpower.

There may be only one — let’s hope that one is me.

I made peace with Bismarck in 2030. Of course, with there being just one German city remaining, it was little more than a formality — they couldn’t trouble me, even if they tried.

In 2032, the Apollo Program was completed in Thebes. I would have 35 turns to build a spaceship — not gonna happen. I hung on to the Space Victory dream for another five or six turns before letting it go — there simply isn’t enough time to get all the parts built, especially when I still need to discover some of the requisite technologies. 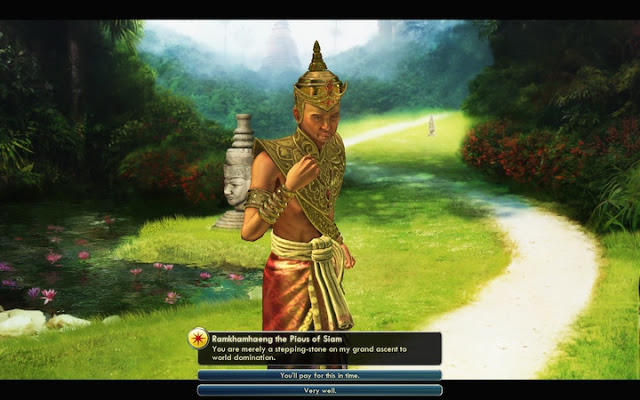 That left only conquest and time victories as viable options. I have no interest in a Time Victory, so I turned my focus to eliminating the humungous Siamese civilization. (I need only capture their capital to win, but reaching it is not an easy feat.) Conveniently, Ramkhamhaeng declared war on me in 2032.

I sent out my Destroyers, Battleships, and a newly constructed Nuclear Submarine to wrestle control of the seas. This triggered a tense naval battle in the southern ocean, which lasted several turns. Thanks mostly to my Nuclear Submarine, I came out victorious. In a world of islands, the civilization with the strongest navy rules supreme — the Siamese coastline was at my mercy.

I had stationed a few units near the eastern side of the Siamese empire, in readiness for war. These units now, with the help of a Destroyer, approached the Siamese city of Nakhon Si Thammarat. I captured the city, and installed a puppet, three turns later. Rio De Janeiro, one of Ramkhamhaeng’s city-state allies, fell to my forces immediately after Nakhon Si Thammarat. As a result, the city-state of Edinburgh took a shine to me — I had a new ally. 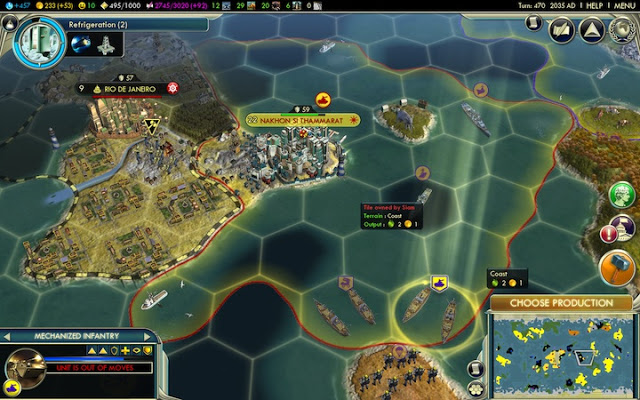 This turn was a good one, as it also brought me a new Great General, triggered We Love the King Day in five cities (due to a Sugar resource acquired in Rio de Janeiro), and saw the completion of the Oxford University wonder in Heliopolis. I got another free technology from the wonder, which meant I had received three free technologies in as many turns — the previous two having come from a new Social Policy, Scientific Revolution.

A quick score check told me that I was 150 points ahead, with 23 turns remaining.

I had something of a problem, though, as my civilization was all out of Aluminum. You need Aluminum to build many of the Modern Era units. I needed Nuclear Submarines and Missile Cruisers to carry Guided Missiles, which I planned to use in attacking the Siamese capital. But without a new source of Aluminum, this couldn’t happen.

To alleviate the Aluminum shortage, I captured Martaban, a Siamese city with Aluminum in its territory, and founded two new cities — Giza and Pi-Ramesses — in 2044. I quickly built a Missile Cruiser the following turn, stocking it with three Guided Missiles. My Nuclear Submarine also made the trip back to my home territory to pick up a couple of Guided Missiles.

Ramkhamhaeng begged (unsuccessfully) for peace in 2045. I knew then that I had him.

The Giant Death Robot unit that I had been so worried about was nowhere to be seen. I guess they either didn’t have one in the vicinity of the capital or hadn’t finished building their first one.

I launched a vicious assault on the Siamese capital, Sukhothai. Five Guided Missiles were flung into the city, reducing its defences to almost nothing. My naval forces formed a semi-circle around Sukhothai, while my strongest land units disembarked in the surrounding tiles. Ramkhamhaeng tried to send in Modern Armor, Destroyer, and Mechanized Infantry units to wipe out my invasion fleet, but we outnumbered them — the once mighty Siamese empire was on the brink of collapse. 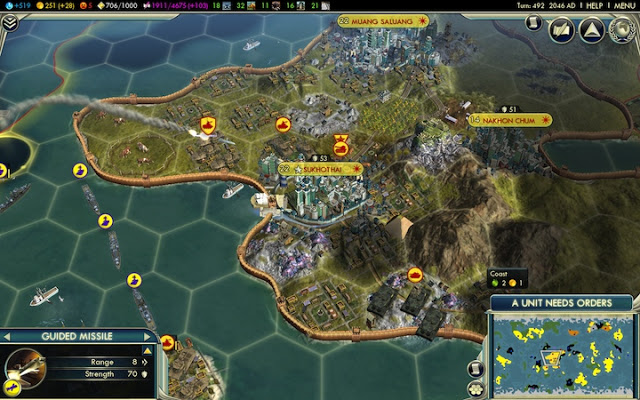 I conquered the world in 2047, with a mere five turns to spare. I have captured every civilization’s capital city, so I win a Domination Victory.

(Am I missing something, or does Civ 5 ditch the interactive timeline and mini-replay that (in previous Civs) would show up on completion of a campaign? I loved that feature, and was hoping to utilize it in my conclusion.) 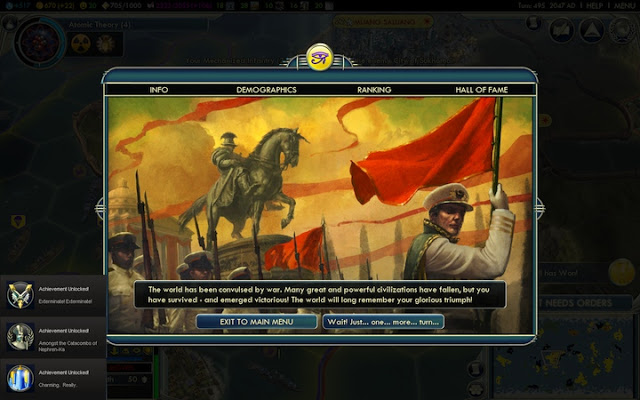 If you missed any of the previous installments, you can catch them at the links below.

My Egyptian civilization was once among the weakest in the world, struggling to make something of its tiny island home. Given my starting conditions, I never would have thought I could pull off such a conquest. But I did the improbable and came out victorious, despite making several mistakes that should have had disastrous consequences.

That leads into the aspect of Civilization 5 that concerns me more than any other; the AI seems far too stupid. I realize that difficulty may have been tuned differently this time, but playing on Prince in previous editions of Civilization was far more of a challenge. I had a slow start, then made blunder after blunder, and remained militarily weak well into the second half of the campaign. Yet no-one ever actually attacked one of my cities with a land unit. A few of my smaller cities were bombarded by sea; otherwise, my territory remained safe. The Siamese were ridiculously powerful at one point, but they never bothered to safeguard that power. And that gave me multiple windows of opportunity.

I was disappointed by the revamped diplomacy system, which seems to have more flash than ever before but lacks a corresponding depth. The leaders look nice, and the new agreements — most notably, the Pact of Cooperation and Pact of Secrecy — are interesting, but trade relations struck me as boring for the first time in any Civ game. 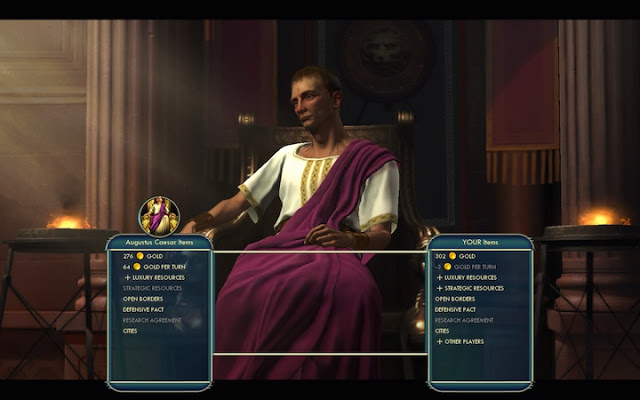 On the plus side, the switch to hex tiles greatly increases the room for interesting movement and city-building strategies. Combat is satisfying and fun, with the one-unit-per-tile rule and hex grid together enabling much deeper strategy than previous Civ games. This was particularly noticeable in the late-game, where I needed to take extra care in protecting siege units and units that get no defensive bonuses. The need to plan when attacking a city adds a depth to combat that was remarkably lacking. And the removal of naval transport units — in favor of an embarkment upgrade on land units — removes nearly all the tedium of island-hopping.

It disappoints me that, after making great leaps forward in Civ 4, the non-combat aspects of the game are de-emphasized here. I can’t speak for the depth and quality of the revamped cultural side of the game, since I paid little attention to it in this campaign, but it looks to have some nuance. Likewise, I feel unqualified to make a judgement on the city-states because they had little affect on the campaign besides allowing Siam’s population to reach approximately five times my own. 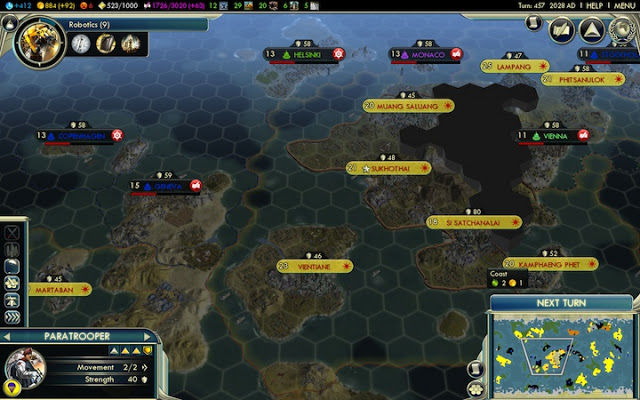 Those city-states helped Siam grow a huge population, but otherwise their impact was minimal.

I like Civilization 5, and I look forward to playing a lot more of it over the coming months, but I can’t help thinking that for every enhancement to the gameplay there is another that makes it worse or less interesting. I pray that if the AI is not smart on the higher difficulty levels, it will at least become more competitive in a future patch.

So ends another Game Diary. I hope you enjoyed reading it as much as I did putting it together. This won’t be the last time I write about Civilization 5, but this chapter of the Game Diary is most certainly closed.

I’m open to suggestions for the next Game Diary, so drop me a line in the comments if you’d like to see me take on any particular game or alter the format in some way. 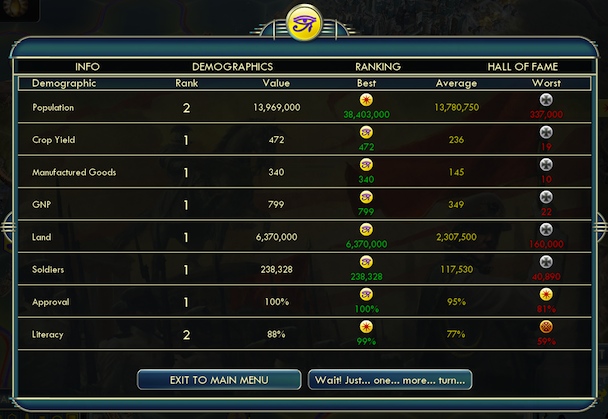 If you missed any of the previous installments, you can catch them at the links below.