Sigh. I really don't know why I'm even bothering with this one. I mean considering that this is only supposed to be quick little internet flash game and probably isn't meant to be taken seriously as an actual video game but after spending about an hour with it, I really have to vent my frustration in some manner. So, I have decided to write this review for a game I feel needs a good grilling. Pun intended BTW.

The Folks over at PETA are at it once again. First they set their sites on Mario (Super Chick Sisters and New Super Chick Sisters) and Cooking Mama (Mama Kills Animals) and turned them into overly obvious allegories for the evils of the meat industry. Now their vegan game development/propaganda machine has a new target, the current darling of the indie scene, Meat Boy. Because he is meat and Meat is bad.

Really PETA? You couldn't be more creative and go with a less obvious choice?

When I have decided to write this review, I told myself to take the high road and not go on a huge rant about what I think of PETA's protest policies and idealogy. Instead I will simply evaluate this as I would any other game (much like I did with New Super Chick Sisters). So let's get on with it shall we? This is Super Tofu Boy: 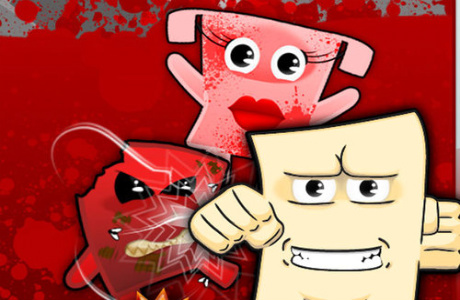 The basic plot of the game goes a little something like this, Bandage Girl dumps Meat Boy (because he's ugly and smells bad) for the fit and sexy (PETA's words not mine) Tofu Boy. In a fit of bloody, jealous rage, Meat Boy kidnaps Bandage Girl (A la Dr. Fetus) and is up to Tofu Boy to save her. I really must say that this is a really weak, uncreative and ultimately immature bit of parody on PETA's part. I mean to degrade Meat Boy simply because he is literally a piece of Meat is pretty stupid and for Bandage Girl to pity date then dump him for a more handsome character is pretty egotistical on her part. But I guess vanity can be a harsh mistress. Besides, isn't mocking Meat Boy in a sense mocking the animals that were killed to create him? I mean it isn't his fault that he is what he is. Perhaps I reading too much into this.

Actually, I could come up with a better plot than this that I think PETA would actually approve of:

Meat Boy is sad because of all of the animals that were killed in the process of his creation, so to make things right he decides to speak out against (insert restaurant chain here) in an attempt to make a mends. The chain catches on to Meat Boy's crusade and hire's Dr. Fetus to eliminate Meat Boy. So, Fetus kidnaps Bandage Girl and the rest writes itself. There you go. A much better plot that actually took all of two minutes to come up with.

Oh and by the way, isn't using the exact character names and likenesses an act of copyright infringement?

The game's graphical presentation on the other hand is actually pretty good. It shares the exact same retro style of Super Meat Boy with simplistic 8-bit style backgrounds and sprites. Actually the sprites look almost identical to those used in Super Meat Boy, except Meat Boy and Dr. Fetus have been altered slightly to make them look more evil. Not much else to say in terms of how the game itself looks but it can be said that the menus and hand drawn versions of the characters are not much to be desired. The menus are bare bones and only present the names of each level. The hand drawn characters as you can clearly see at the top of the page are pretty lame and it is obvious that not much thought went into them. 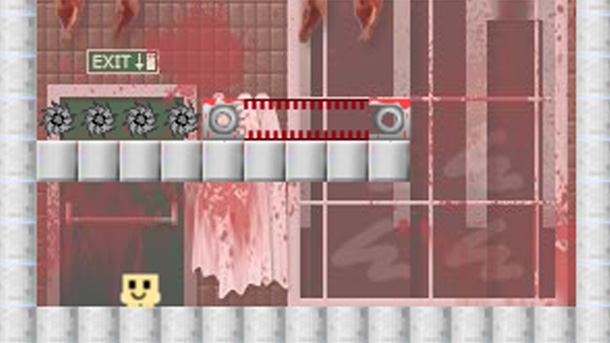 We have established that the story is stupid and the overall presentation isn't exactly perfect but the most important thing is how well the game plays. How well does it play? Not well. Not well at all.

And here I thought PETA had finally learned how to make a fun flash game. Sure, Mama Kills Animals and the first Chick Sisters both unquestionably suck but New Super Chick Sisters was actually an enjoyable platformer for what it was. But they have gone back to not caring about the actual gameplay. Much like Mama and Chick Sisters 1, all the development team did was rip off the game mechanics and atmosphere (it actually feels like a cut and paste job) and that's it. No fine tuning to make sure every thing works, no beta testing, no checking for bugs or even putting any thought into the level designs. No. What we have here is an unplayable mess created by a development team whose desire was to create a piece of anti-carnivore propaganda rather than an enjoyable video game.

The game consists of three worlds, which each have three short levels (It's flash game, so I don't have a problem with this), each being a section of a slaughterhouse (obviously owned by popular PETA target, McDonalds). The levels them selves are pretty much designed the same way as they are in Meat Boy, with the goal being to reach bandage girl, only to have Meat Boy take her away in the end. They consist of buzz saws, disintegrating walls and lasers, among other familiar obstacles. The game also uses the exact same gameplay mechanics as Super Meat Boy with Tofu Boy being able to run at high speeds and bounce off of walls. These mechanics worked pretty damn well in Super Meat Boy but do they work just as well here? Nope.

Why? Because whoever was in charge of the game's development did not buff out the kinks in their version of the mechanics and control scheme. Once Tofu Boy begins running it is hard to get him to stop because of the momentum that is generated when he is running causes a delay on his attempts at putting on the breaks. The wall jumps are also incredibly awkward, with Tofu Boy bouncing all over the place rather than actually making a successful landing onto the next platform. Although, this could be because the control scheme itself is incredibly frustrating. The arrow keys are used to make him move and the shift key makes him jump. Trying to make him change direction without running into anything or falling off a platform or screwing up a jump is a sheer test of patience. The fact that the buttons that are used to control the character are awkwardly placed is combined with glitchy mechanics, which makes playing this a game an absolute drag.

These issues are not too noticeable at first but once you enter the second world, things begin to get less tolerable. World 2 is damn near impossible because of one really bad choice in level design. This design choice is the fact that as soon Tofu Boy moves, the screen is being pulled upwards and if Tofu Boy can't keep up with the lighting quick movement of the screen, he dies. This is absolute rubbish! When you add the bad controls, sloppy mechanics and this unfair element of challenge, the game becomes virtually unplayable.

Sure, Super Meat Boy can also be an incredibly frustrating game to play through but the controls and mechanics are both solid and the players are actually given a fair chance to beat the level, even if it in some cases it happens to be slim. At least there isn't anything else that could make Tofu Boy any worse.

Actually, I forgot to mention one key design flaw, the game lags like nobody's business. I have found that the game will start to lag a lot during key jumps, which would totally throw me off of my game and cause instant death. Another sign of bad programming, ladies and gentlemen.

At least there are helpful gameplay tips like, "Vegans make better lovers." and "LOL at Meat Boy's Breath being bad," to help guide the player through this challenging play through.

If the game has any thing close to a saving grace it would be the music, which was donated by the brilliant video game composer and Video Games Live co-founder, Tommy Tallarico. The music for the main menu is actually a pretty cool guitar solo that uses plenty of power chords, with a distinct hint of heavy metal influence. The music for the levels is actually pretty good as well, with it having an old school sound to match the old school graphics.

I know Tallarico is PETA supporter but did he actually play this game?

I may hate this game but at least Team Meat has a sense of humor about it as seen in this Tweet they sent out:

"Holy shit, Peta made a Tofu parody of Meat Boy… my dreams have come through."

The real deal is much better than this bland carbon copy. I can't help but feel as if this is an example of art imitating life.