I haven't quite gotten around to reviewing Tom Bissell's Extra Lives: Why Video Games Matter, but [spoiler alert] I don't want to believe it's just because they're addicitve like cocaine.  Yesterday, I fired up Forza Motorsport 3 for the first time in a long time.  It's usually a pretty telling sign when you have to download a title update though that may be in part due to the updated dashboard as well.  All the Gran Turismo 5 talk and reviews made me want to revisit the Xbox's answer to the Playstation's popular racing series. 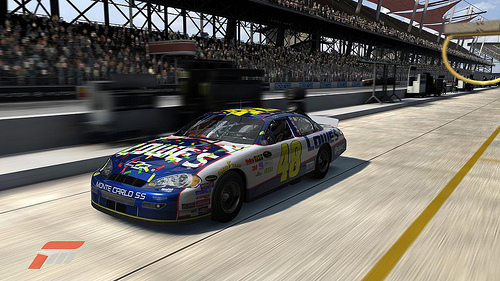 I spent a lot of time racing in Forza 3 when it came out.  Unlike its predecessor, the Jabber crew did not quite jump on the racing sim bandwagon, afraid that riding required the use of brakes.  Me, I loved the race rewind feature and played through six years of Season Play.  It had always been a goal to go for the full 1000 G, but I knew after playing through the six seasons that I needed a break.

Last night, I jumped back in and remembered why I was so impressed in the first place.  Yes, the game looks and feel great.  I remember being disappointed when Forza 2 came out and I thought PGR3, a launch title, looked better.  But in addition to just the game itself, what impressed me most was the work that Turn 10 did in creating a community.  While it may be small, I suspect it is very passionate.

Immediately upon starting the game, I received notification via the game's mail system that I had free downloadable content waiting for me.  Not being a car junkie, I haven't gone out to download every new car pack or track that has been released for the game.  But I am not one to turn down free DLC and it looked like that for pretty much every car pack that was released, Turn 10 gave a free sample car.  Not a huge deal but it is very smart and appreciated.

More importantly, Turn 10 did an awesome job of creating a place where gamers could come together.  I will qualify this with the fact that I am not a hardcore driver or Forza community member.  But the studio has provided the tools for even a noob like me to post pictures and create videos of gameplay, and I think that's pretty awesome.  While not unique to Forza, it is an area that is important and extending the life and replayability of a game far beyond its release date.  It is showy and perhaps superfluous, but it is well supported and a creative outlet for enthusiasts.

One thing that Forza has done more very well is promote interaction between users beyond the gameplay.  Spend any time in a Auction House and you can see how talented and passionate people are.  Yesterday, I did a search for car designs and came across a design celebrating Jimmie Johnson's fifth consecutive NASCAR Sprint Cup title.  That's less than two weeks ago!  And I used zero online credits to "purchase" the design and gave the creator a five-star rating for his work.

I'm not necessarily trying to say we should all play Forza.  What I do think is how it is interesting to see how games can connect gamers.  I think about how Halo 2 had online forums and stat tracking and that's when I followed a fairly innocent post looking for "geezer" gamers.  Funny how six years can fly right by.  I think it's wonderful when games take that extra step whether its Forge and the Replay Theater in Reach, videos of craziest Skate crashes, finding that SOB who spawn killed you in Black Ops.  It reminds me of why I play games as much as I do and it makes me feel better knowing that I'm not playing alone, but rather as part of a community.