Tonight we are going to take a look at a retro fighter that is a little bit different from the usual fare of "martial arts masters" or "street fighters" brawling with one another for the sake of honour, revenge or personal glory. No! This time we're talking about a straight up battle for global dominance…with dinosaurs and giant apes. This is Primal Rage. 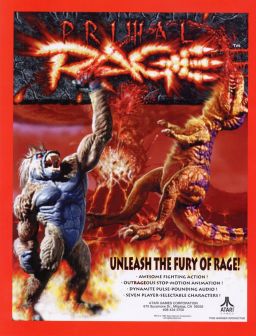 Primal Rage first hit the arcade scene in 1994 in the middle of the fighting game craze that was started by titles like Mortal Kombat and Street Fighter II about 2-3 years prior. Arcade junkies and fighting game fans alike quickly found themselves drawn into the game's unique presence. So it was to no surprise that Atari released several console ports of the game later that same year.

Primal Rage is seen as a classic by some and a flash in the pan by others. Is it an underrated cult classic? Or is it mediocre at best? 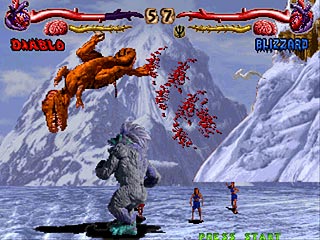 (Blizzard showing his followers how to air juggle)

The story of Primal Rage is a short but interesting one. The Earth as we know it has been devastated by a meteor. Civilization has been reduced to rubble and all means of technology has been destroyed. There's no phone, no lights, no motor cars. Not a single luxury. Like Robinson Cursoe. As primitive as can be.

And what is left of humanity have devolved back into cavemen. These cavemen have been separated into tribes, which each worship separate giant monsters that have been created by radiation caused by the meteor. These monsters have begun to branch away from their own respective territories and have started to invade each others turf and take their land. Think of it like a game of Risk but with dinosaurs. Which beast will become the overlord of the global wasteland simply known as Urth?

For a fighting game about a bunch of giant monsters beating each other senseless, this story isn't half bad and actually offers a nice twist on the end of days sub-genre. You got to admit that the whole world being reduced to one very large skull island is fairly original.

Primal Rage shares a fair bit in common with the early entries in Midway's (may they Rest in Peace) Mortal Kombat series in terms of its graphical presentation. The backgrounds and miniature human characters were all created with the use of digitized graphics. Both of these aspects look pretty good. The backgrounds, whether they are frozen tundra, dank caves or a demolished urban landscape, the player is really given a feel for just how much of a hopeless wasteland Urth has become. The humans are also animated pretty well when they cheer on their chosen God or rush out onto the field during a fight. I also like how the tattered rags worn by each tribe has a different colour. 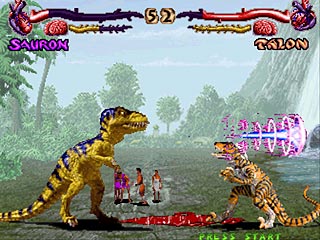 The Monsters themselves look pretty impressive. Like everything else in the game, they are digitized. But unlike other games that use this method, the fighters are not human actors but characters that resemble dolls used by stop-motion animators, much like the ones used in the original King Kong movie. I happen to find this interesting as an animation buff. Each of these monsters looks especially fierce and matches the motif of their particular territory. Diablo for example is a bright red with black patches all over this body, which matches the lava drenched-domain that he rules over.

The blood and guts that are featured (although not in every version) are also done in the same vain as Mortal Kombat. The blood that splatters across the screen and the remains that are left behind after certain fatality moves are fairly cartoony looking in comparison to everything else but that isn't a bad thing and it even adds to the game's appeal. But what is probably my favourite graphical (besides the character models) is the brain and heart that have been added to the health bar. When one of the fighters becomes stunned, the brain will fry for a few seconds and when he/she dies, the heart will explode and the brain will dissolve into dust. I know it's all part of the gross out appeal and I usually don't go for that sort of thing but it just looks so cool here.

Primal Rage also sports an interesting soundtrack, which is mainly composed of tribal music and primal jungle sounds and the character selection screen actually drops a few bongo beats when scrolling through the characters, which is pretty neat. The soundtrack doesn't sport anything overly memorable but it supplies the perfect tone Urth's atmosphere and the fast pace of the tribal music can really get the blood pumping during a fight.

But you guys don't want to read about plot and King Kong and bongo drums. No. You want to read about giant monsters beating the crap out of each other. With that said, let's move on to gamepaly. Primal Rage plays just like any other 2-D fighting game. Two characters beat on one another from one side of the screen to the next, until one of their health bars is reduced to nothing. The first monster to win two rounds wins the fight and you must defeat all of the other characters to complete the game. You know the deal.

However, Primal Rage does spice things up a bit with some new ideas. Besides the whole exploding hearts thing, players can eat the humans that are dumb enough to wander onto the field by knocking them into the air. If you eat your opponent's followers, you will receive bonus points. If you eat your own followers you will loose points. But either way you will gain extra health. Health power-ups in a fighting game? Interesting and at times useful but it isn't really all that necessary and it is kind of hard to pull off. 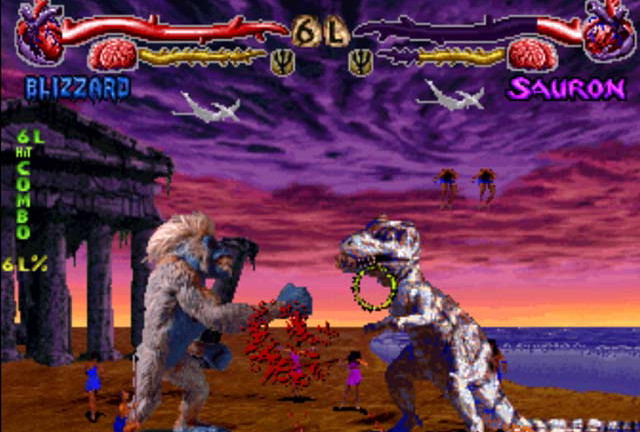 Another interesting aspect is the fact that you can actually start a mini-game in the middle of a fight, called Human Volleyball, which is basically just the two opponents smacking human followers back and forth. I have never been able to pull this off myself but from what I have seen, it offers a few chuckles but it gets lame quickly. Again, it is an interesting idea but it isn't executed very well.

The last of these new (for the time) ideas is the fact that there isn't a final boss. In its place is a final battle royal between all of the monsters. And by all the monsters I mean you fight them all again one at a time. But don't worry. Before the fight begins, you are given the chance to dine on some of your followers to gain some extra energy that is stored on a second health bar, which helps give you a fighting chance. I actually like this final showdown between all of the characters. It offers a certain epicness that you didn't see in a lot of fighters at the time. My only complaint is that all of the monsters should have been on the screen at once to give it more of a "Destroy All Monsters" vibe.

The basic gameplay is pretty good with fairly fast paced fighting and some good mechanics. But the controls can feel a little stiff at times and the special moves can be a bit too difficult to pull of at times. Mostly because you need to press the up button to do them and up is jump and when you jump, you mess up the move. This makes the already confusing instructions for the fatality moves even more complicated. I mean to pull these moves off, you have to hold down certain buttons as you fiddle around with the joystick or D-Pad (depending on which version your playing), which can get very annoying, so I say it is better to just pound the crap out of your opponent without trying to do anything fancy. It'll just distract you.

Speaking of the fatality moves, did you know that Atari was forced to censor the already limited gore that was featured in the game (it was rated T) from many of the different console and arcade ports? Why? To make a long story short, an Arizona woman caught her son performing this fatality in the Genesis version:

This led to a massive backlash against the game and the developers buckled under the pressure. Oh well. The fatalities are pretty lame for the most part anyway. So you didn't really miss all that much.

Another downer about the game is that if you happen to be loose a fight and decide to start fresh with a new character, you will have to back track and fight all of the monsters you have already defeated to reclaim the territories you have already won. This is just a lame tactic used to muscle kids out of their quarters. Or in the case of the console versions, to desperately tack on some extra time into the game's play time.

Overall, Primal Rage is a good fighter with a unique look and story and even introduced some interesting concepts. But lame fatalities, pointless add-ons, stiff controls, having to back track when changing characters and an awkward system for pulling off special moves, prevents it from becoming one of the all time greats.